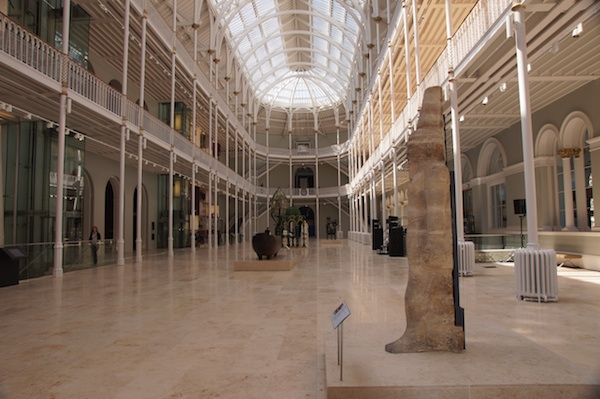 Meanwhile, a packed programme of exhibitions explores diverse themes from the secret world of primates in a major new family exhibition, Monkey Business, to the complex history of the peoples known as Celts, ground-breaking fossil discoveries and adventures in architecture with LEGOⓇ bricks.

Dr Gordon Rintoul, Director of National Museums Scotland, said: “2016 is a hugely significant year for us. It is especially fitting that dramatic new displays of our collections of science and technology, decorative art, design and fashion will be unveiled during the Year of Innovation, Architecture, and Design. We are also looking forward to unveiling a transformed visitor experience at the National Museum of Flight – already one of Europe’s major aviation museums – which will showcase our outstanding collections in new and exciting ways.”

In summer 2016, ten new galleries will open at the National Museum of Scotland. Following a £14.1 million redevelopment, these will showcase over 3000 objects from National Museums Scotland’s internationally important collections of science and technology, decorative art, design and fashion. A large proportion of the objects will not have been seen in public for generations, if at all. The new galleries will open in the 150th anniversary year of the opening of the original Victorian building in 1866. Exhibits will range from Dolly the sheep to a Picasso glass sculpture, a 2.5-tonne copper cavity from CERN to shoes by Alexander McQueen. Two redeveloped hangars at the National Museum of Flight will be unveiled in spring 2016. The £3.6 million project involves the restoration of two nationally significant Second World War hangars at the Museum. New displays will dramatically present an array of world class military, commercial and leisure aircraft with interactives, film programmes and stories of those who piloted or flew in the aircraft.

Celts will open on 10 March 2016 at the National Museum of Scotland. This dramatic exhibition will tell the story of the different peoples who we call ‘Celts’ through the stunning objects they made, including intricately decorated jewellery, highly stylised objects of religious devotion. The exhibition also explores the enduring legacy of the ‘Celts’ in the decorative arts of the late 19th century. Organised with the British Museum and sponsored by Baillie Gifford, this is the first major British exhibition in 40 years to tell the story of the Celts. It will showcase rare objects on loan from 12 international lenders and 14 UK institutions.

Opening on 2 December 2016, Monkey Business is a major, family-friendly exhibition which explores the world of primates, from the tiny mouse lemur to the mighty gorilla. It will feature more than 50 spectacular new taxidermy specimens created by National Museums’ specialists, and skeletons of monkeys, apes, lemurs and bushbabies alongside a host of interactives, film, models and photography. Visitors can discover how different primates move and communicate, how they’ve developed tools to get hold of food and their complex social systems. It will also examine the relationship between humans and primates, including the ways in which many species are threatened with extinction through the impact of habitat loss and hunting.

Fossil Hunters: Unearthing the Mystery of Life on Land, opening on 19 February 2016, will explore the transition of life from water to land 360-340 million years ago, a gigantic evolutionary step without which humans would not exist today. The story of this transition has remained a mystery but can now be told using an internationally important collection of fossils from this period, recently discovered in Scotland. These offer a unique insight into a complete ecosystem which existed millions of years ago. Fossil Hunters will also tell the story of the extensive scientific research and fieldwork behind these remarkable Scottish discoveries.

Opening on 22 April 2016 at the National War Museum, Life Support: Stories from the Royal Regiment of Scotland marks the Regiment’s first decade of operations. The exhibition will offer a fresh perspective on the combat and peacekeeping work of Scotland’s infantry soldiers as well as the people, military and civilian, who make up their vital support network at home and on the frontline.

Build it! Adventures with LEGOⓇ Bricks is a series of events and activities taking place from 29 January to 17 April. On Wednesday and Fridays in February and March, visitors will have the chance to watch a large scale model of the National Museum of Scotland being built in the Grand Gallery, designed by the renowned ‘artist in LEGOⓇ bricks’, Warren Elsmore. During February half-term, families can help with an ambitious project to build one of the museum’s most iconic objects on a giant scale. The programme of events will be supported by a small display of Warren’s creations; model buildings, vehicles and other objects made with LEGOⓇ bricks. Build It! Adventures with LEGOⓇ Bricks is part of the Festival of Architecture 2016, which will celebrate Scotland’s fantastic built environment, as a key part of the 2016 Year of Innovation, Architecture and Design celebrations.

The world famous Wildlife Photographer of the Year returns to the National Museum of Scotland on 16 September 2016 following its premiere at the Natural History Museum, London. From intimate portraits to layered motion stills, the award-winners offer startling visuals, compelling narratives, and a passion for the natural world.

A series of free exhibitions in the Grand Gallery will continue throughout the year on topics ranging from prehistoric alpine jade to twentieth century modernist jewellery. Details of these will be published next year.