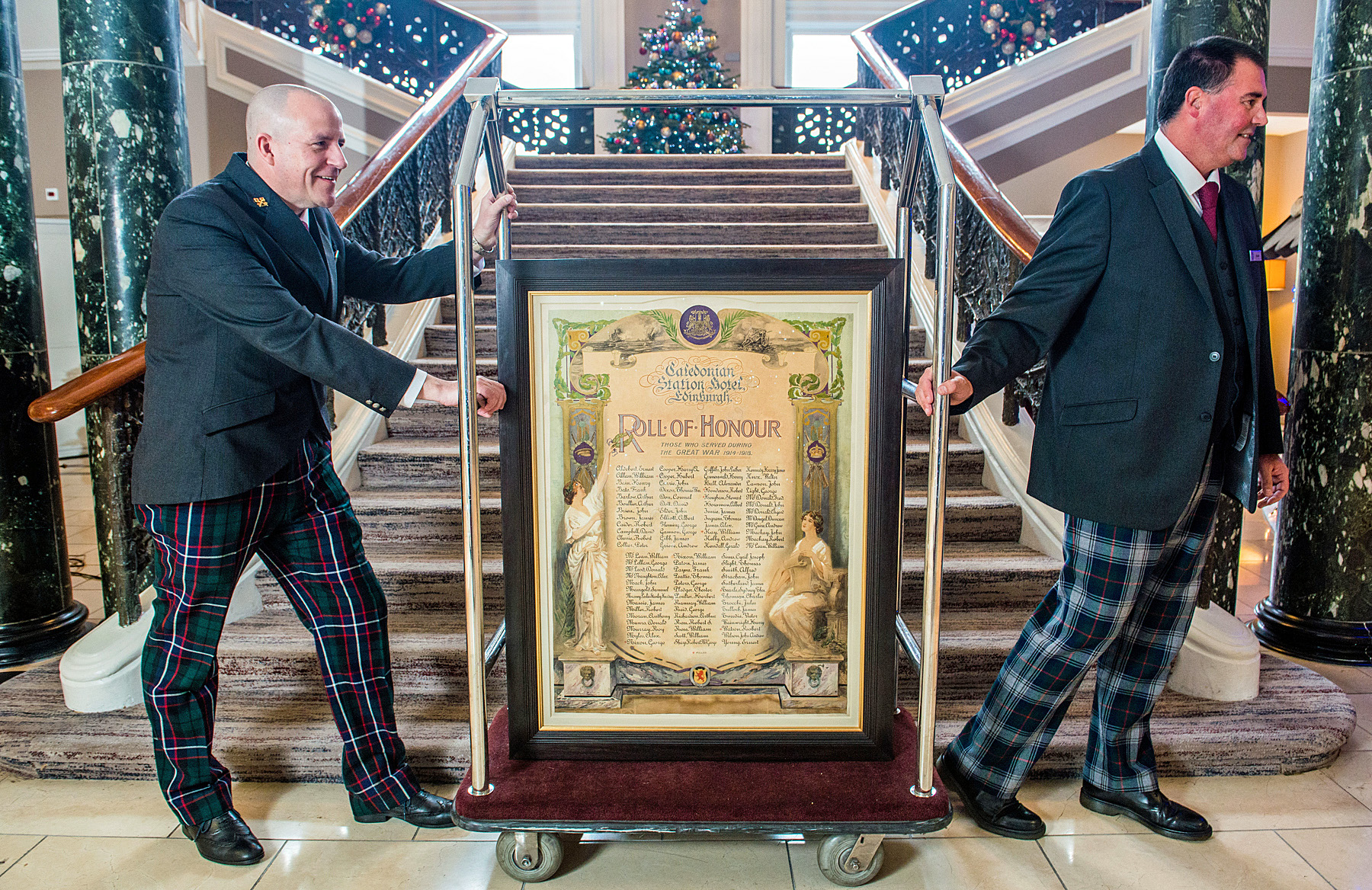 Today the Roll of Honour listing all those who served in the Great War and worked at the then Caledonian Station Hotel was given pride of place within the Waldorf Astoria Edinburgh – The Caledonian following its restoration.

The artwork lists 70 names and the search is now on to find friends and relatives of those named.

Dale MacPhee, General Manager of the luxury five-star hotel at Edinburgh’s West End, said: ‘Having found this wonderful piece of history, we would now love to find friends and relatives of those who are named.’

‘The Roll of Honour is a lasting memorial to staff at ‘The Caley’ and we are delighted to be able to display it proudly in our Peacock Alley. The Caley has been one of the most iconic buildings in the city since it was first opened and I am sure that staff named on our memorial was as proud to work here then as we all are today.

‘Our hotel has a well-documented history of welcoming Royalty, Prime Ministers and celebrities alongside international visitors to Edinburgh. This memorial allows us to write an additional chapter paying tribute to those who worked here. In fact, I do wonder if it is fate that we’ve found it now, 100 years on from the Great War and at a time when that is the focus of commemoration.

‘I am thrilled that we found this Roll of Honour and that we have been able to have it conserved with the help of War Memorials Trust and the Scottish Conservation Studio here in Edinburgh. We can now share it with hotel guests visiting locals all year round and tell them the story behind it with pride.

‘Our memorial has not hung in the hotel for more than thirty years. As it reclaims pride of place this formal unveiling is very fitting and it is appropriate that we try to learn any stories behind the names.’

The artwork was conserved with support from War Memorials Trust.

Frances Moreton, Director, performed the formal unveiling of the piece. She said: “War Memorials Trust is delighted to have supported the repair of the plaque unveiled today. This is a wonderful example of a custodian ensuring their war memorial is in fit condition to mark the centenary of World War I.

‘This is just one of the huge variety of projects across Scotland supported through the Centenary Memorials Restoration Fund which has £1 million available to fund war memorial repair and conservation. Money is still available and we encourage communities across Scotland to follow the example of the Waldorf Astoria and get in touch to ensure the war memorials remembering the fallen of their local communities are fit for the centenary events and services which will culminate on 11th November 2018.”

The work was undertaken by Helen Creasy at the Scottish Conservation Studio, she said: ‘I was delighted to be asked to conserve the Roll of Honour. The project was a challenge as the work had become quite damaged, with dirt, tears and holes, stains, and flaking paint.

‘The fabric-backed paper was loose on the wooden stretcher; the surface had been wiped with a damp cloth – which had smudged quite a lot of the lettering. The treatment was very carefully planned, and we were able to gradually progress through all the steps that were needed in order to clean and flatten it, repair the tears and fill all the losses, before retouching the areas of paint that were missing.

‘A frame was made for the Roll of Honour which not only protects it against future damage, but really does justice to such a special piece. It was very rewarding to take the work from being damaged, and un-displayable to something that is close to its former glory and which can deservedly take pride of place at The Caley.’

The Roll of Honour will hang in Peacock Alley. Anyone recognising a name should contact marina.cruz@waldorfastoria.com with details of their family connection.