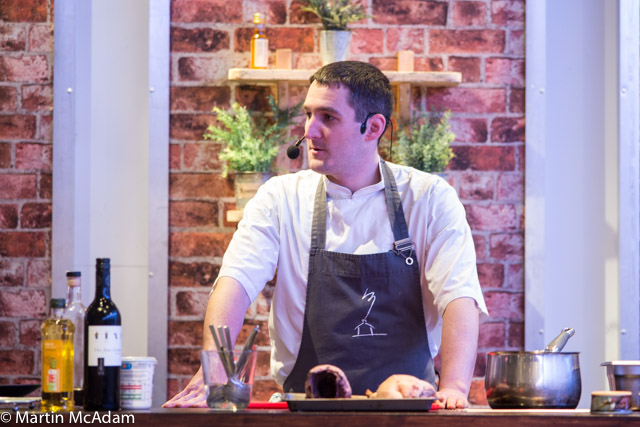 The EICC is a great Edinburgh venue, but in the case of the Foodies Festival which we visited there today we feel that we had a better time at Inverleith Park a couple of years back. In the summer as an outdoors event, it was hit by the vagaries of the Scottish weather, but our last visit was bathed in sunshine and full of good memories. I received a couple of complimentary VIP tickets from the organisers and thought this would mean a real VIP experience. I think if I had paid £38 for a VIP ticket rather than just £15 entry I might have felt just a little short-changed, and certainly some murmuring from fellow guests in the VIP lounge indicated that they felt the same way. What the add-on price offers is a glass of champagne and use of a room well away from everything else. It also offers complimentary entry to the drinks demos, but the cakes and chef areas are already free. There is also a goody bag for you to take home.

This is not to say it was all bad, just a bit cramped and too busy in the main areas, so if you are planning a visit on Sunday you might be best to go either early or late! Doors open at 10 with the first chef’s demonstration at 10.30 by Fraser Allen from Pompadour by Galvin Brothers. Before that we caught the tailend of Tony Rodd’s cooking demonstration. He was a Masterchef finalist earlier this year and had set about cooking wood pigeon with winter vegetables (even though he admitted it was actually partridge…!) Entertaining and accomplished he promised to come back to Edinburgh soon with his supper clubs. Part of the issue earlier on in the day was the lack of room in the main hall, where many vendors had food on offer but the queues were off-putting.

And had I known that there was another hall with other stalls then I would of course be able to give you a fuller report on the event. There was little signage to suggest more exhibitors, so be aware that you can go left or right at the bottom of the escalator!

In the main hall there was music on the main stage to keep you entertained while browsing the many gins, sausages and kitchen implements on display, and there are cooking classes for children. We came home with a new cast iron pan which promises a lifetime guarantee and that nothing will ever stick to it. Will keep you advised on that one!

It is a pity there is no wifi on offer at the EICC for anyone attending.  I know that the wifi there is excellent – so excellent we were able to live broadcast the UK General Election results from the same room earlier this year. Wifi would certainly have made up for lack of phone coverage in the basement of the EICC.

More details about the event on the Foodies Festival website here.