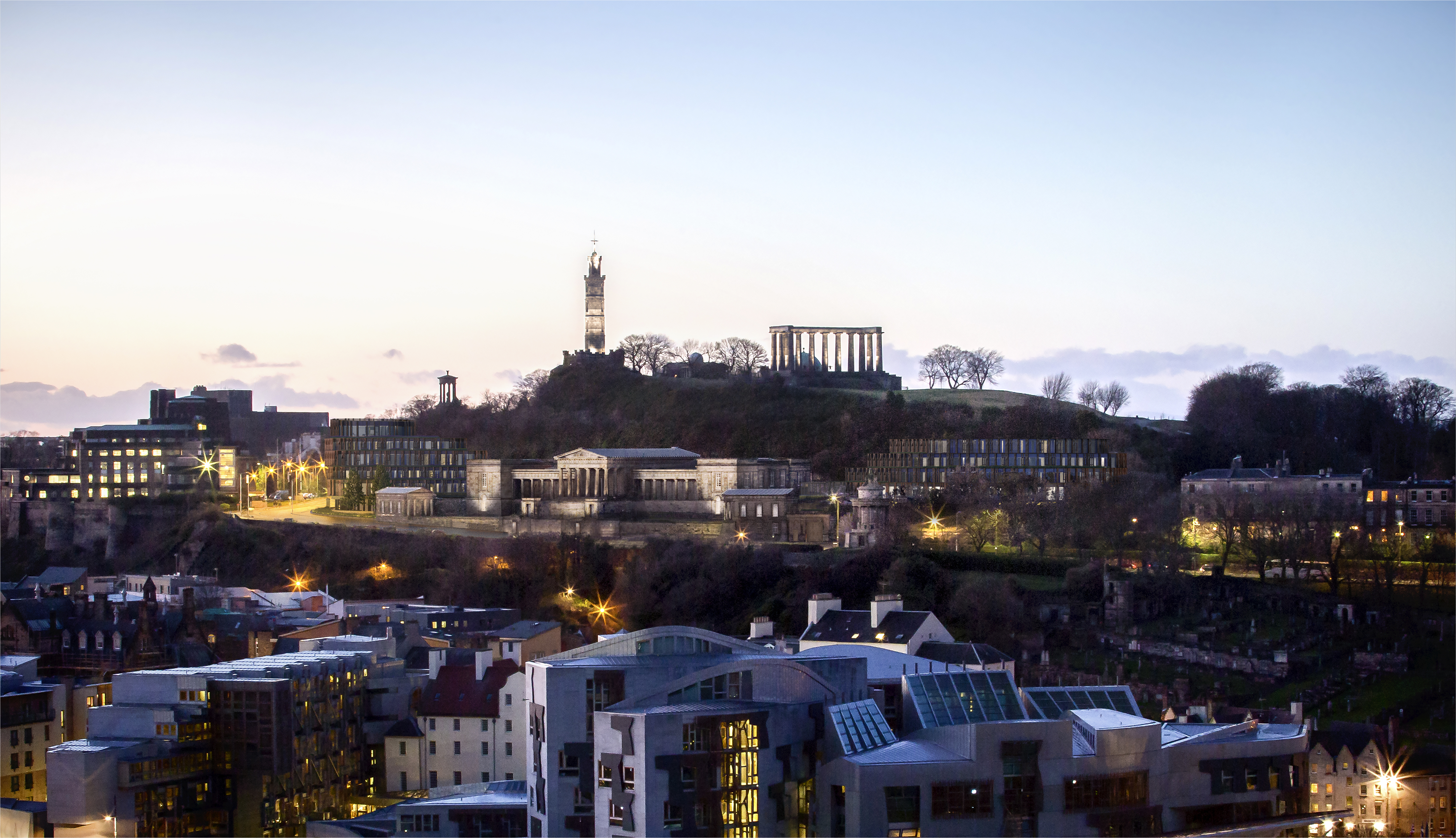 A new planning application has been made to the City of Edinburgh Council today incorporating new designs for the proposed hotel on Calton Hill in the former Royal High School building. This follows public consultation events when the developers say they listened to the public’s ideas.

The application also confirms which company will actually operate the hotel. Gareth Hoskins, the architect for the project, says the new designs respond to the comments made by heritage organisations and the public during the comprehensive consultation process earlier in the year.  Hoskins said: “We’ve listened and taken on board views from a wide range of organisations and individuals through the pre-planning process to develop a fundamentally different design for the site. The design focuses around an informed restoration of the central Hamilton-designed building, repairing its decaying fabric and maintaining the strong sculptural presence of its frontage without intervention.  The existing building will be entirely given over to the public areas of the new hotel allowing its spaces to be fully accessible for the first time in the building’s history.

“Set away from the original building are two new wings containing the hotel’s bedrooms.  Their organic shape with landscaped terraces and undulating copper façade, inspired by the layered volcanic landscape of both Calton Hill and nearby Salisbury Crags, allow the new wings to blend with the surrounding hill.  The contrast of the form and colour of the new elements, together with the considered approach to the landscaping of not just the site but the streetscape around the former high school, allow this hugely important building to retain and reinforce its prominence as a key Edinburgh landmark. The proposed design will create not only a setting appropriate to the stature of the building but, along with other initiatives such as Collective Gallery within the observatory, it should also bring about a level of change that allows Calton Hill to once again become an active and vibrant destination and place within Scotland’s capital city.” It has now been revealed that one of the world’s most respected hotel brands, Rosewood Hotels and Resorts®, has been selected to manage the Calton Hill property if the planning application is successful.

The company currently manages 18 properties in 11 countries including historic hotels such as The Carlyle in New York and Rosewood Castiglion del Bosco in Tuscany as well as contemporary classics such as the award-winning Rosewood London.  Rosewood has extensive experience of restoring and transforming historic buildings, many of which are listed or are located inside World Heritage Sites.

In Paris, Rosewood is overseeing the complete restoration of Hôtel de Crillon, one of the world’s most iconic hotels.  Situated overlooking Place de la Concorde in the centre of Paris, the eighteenth century building is a Parisian landmark which embodies the poise, elegance and spirit of Paris. The two companies involved in the development, Duddingston House Properties and Urbanist Hotels, claim this is a fully-funded plan and that more than £75m will be spent on restoring and converting Thomas Hamilton’s masterpiece into a hotel of international standing.

David Orr, co-founder and chairman of  Urbanist Hotels says that attracting a brand of Rosewood’s stature is a major coup for Edinburgh and Scotland. He said:  “Rosewood is a truly world-class hotel operator combining their ethos of local engagement with their hotels of international standing, a commitment to excellence and a proactive approach to building skills and professional careers.  By bringing Rosewood to Edinburgh we will be able to showcase our beautiful capital city and Scotland’s creative and cultural talents to a new global audience. The full restoration of Thomas Hamilton’s masterpiece will create a new accessible destination for the Edinburgh locals and visitors alike.

“Rosewood Edinburgh will be a prime example of Rosewood’s philosophy of A Sense of Place,” says Radha Arora, president, Rosewood Hotels & Resorts.  “The former Royal High School is one of Edinburgh’s most important landmarks and we will be drawing on our experience with historic properties such as The Carlyle, Rosewood Castiglion del Bosco and Hôtel de Crillon, to ensure the heritage and history of this building is preserved and celebrated.”

The developers also say that the economic impact of the new hotel would be significant for Edinburgh and the whole of Scotland.  The project is expected to create up to 260 jobs in the hotel while supporting a further 310 roles in the supply chain and 270 in the tourism industry over the next ten years.  Independent research has estimated the hotel could contribute £31.5m to Edinburgh’s GDP and £36.7m to Scotland’s economy on an annual basis.

Graeme White, head of tourism at Scottish Development International, said that the hotel sector in Edinburgh is a key aspect of the city’s economic infrastructure and therefore critical to the success of the tourism economy:  “Research into the tourism market suggests that a luxury hospitality brand such as Rosewood, could stimulate interest in Edinburgh to increase development opportunities and create economic value.  Therefore we are happy to support this development as part of the city’s aspirations to be an international gateway city that can attract luxury global operators as per the city’s, and the country’s, tourism strategies.  We look forward to seeing this project come to fruition.”

Gordon Dewar, chief executive at Edinburgh Airport and board member of VisitScotland, believes that having a new world-class hotel in Edinburgh would be a game-changer for Scotland’s tourism market: “A Rosewood hotel in Edinburgh will allow us to market Edinburgh around the globe.  We are constantly competing with many other European airports to attract investment into Edinburgh as both a market and a destination.  A world-class hotel will attract a new level of interest and economic activity that will benefit everyone with a stake in the visitor economy.”

Malcolm Roughead, chief executive of VisitScotland, says that establishing an international hotel in Edinburgh at the very top end of the market is imperative if the capital is to meet forecasted visitor demand:  “The Tourism Development Framework for Scotland reveals that there is a need to provide more five-star accommodation in Edinburgh.  In the ten years to 2023, the number of visitors to the city are predicted to grow by 4.4% to 1.6m which would rank Edinburgh first equal among UK cities in terms of growth. Therefore projects such as the former Royal High School development not only have the potential to help fulfil the capital’s requirement for more luxury accommodation, but are vital for the continued growth of Scotland’s tourism industry which is worth an annual £11bn to the country’s economy.”

Edinburgh is also a major destination for international conferences and Marshall Dallas, chief executive of the Edinburgh International Conference Centre (EICC) says that global visitors to the city now demand the quality accommodation a Rosewood Hotel would offer.: “Scotland’s capital is a magnet for many international business tourists and we are always looking at ways to build on this expanding marketplace.  Being able to offer further luxury accommodation at the top end of the hotel market will make Edinburgh an even more attractive proposition for many global companies and organisations.”