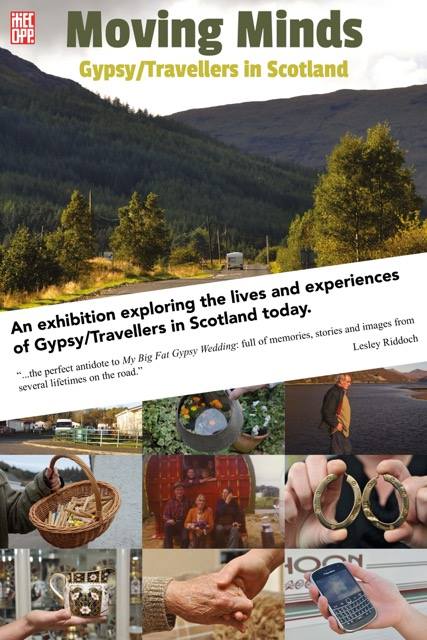 ‘Everyone should be allowed to live according to their ethnicity’

Most of us probably agree with that statement; in a multicultural society we live alongside people from all over the world – and they live alongside us. But what if the ethnic group we’re talking about is that of the Gypsy/Traveller community?

‘Dundee Council accused of caving in to travellers’

‘Do not employ these people; do not give them what they want’

These headlines have all appeared in a range of Scottish local papers over the past two years. If ‘Travellers’ was replaced by the name of any other minority group in these stories, there would – quite rightly – be outrage.

At St John’s Church on Thursday night an enlightening discussion considered whether Gypsy and Traveller communities face ‘the last acceptable form of racism in the UK‘. Is it true? Three members of the Scottish Gypsy Traveller community, Susan, Georgia and Roseanna were joined by Highlands & Islands MSP John Finnie to share their thoughts on the issues facing their communities today, and what could – and should – be done about them. This event ran alongside an excellent exhibition, Moving Minds, which is at St John’s until 31st August. Imagine how you would feel if, despite being highly qualified, you were not even considered for a job because of who you are; if you booked and paid for a holiday and were then told you were not welcome; if your children were quizzed at school about their home life, and even the dentist you consulted automatically assumed your teeth would be rotten as soon as he saw your address. All of these are recent experiences of the panellists. Roseanna has a degree, a postgraduate qualification and human rights training, but can only get seasonal work; Georgia was turned away from a North East holiday caravan site; Susan was so upset by the dentist that her daughter had to accompany her on her next visit. These are all strong, articulate women, yet they feel browbeaten by the system – a system which, says John Finnie, is riddled with racist discrimination, both overt and subtle.

So why don’t Gypsy/Travellers complain? Many feel that nothing will ever change; they give up. Sometimes the repercussions of approaching a higher authority can be worse than the original problem. Many men avoid publicity because their jobs would be at risk if their employers or customers knew where they came from. Others do try to bring complaints, but they struggle to find lawyers prepared to represent them. Cuts to the Legal Aid budget affect Travellers just as they do other disadvantaged sections of society. What is needed, John suggests, is better practice and better training, so that people don’t need to take legal action in the first place.

In 2013 the Scottish Parliament Equal Opportunities Committee published its accommodation enquiry Where Gypsy Travellers Live. It highlighted a lack of progress in the twelve years since the first parliamentary enquiry, and the committee expressed its frustration that ‘the appalling situation of many Gypsy/Travellers is little changed‘. The report called for the development of ‘fit-for-purpose housing strategies‘, and acknowledged that lack of suitable accommodation was the root cause of many of the difficulties experienced by Gypsy/Traveller communities. It is a common misconception that Gypsy/Travellers pay nothing for their accommodation on council sites – in fact, says Susan, she currently pays £106 per week plus the usual council tax and utility bills. Travellers have no right to buy their pitches, and many sites are being sold off to housing developers by cash-strapped councils.

Over and over again, Gypsy/Travellers encounter their greatest problems not with the police but with local authorities. Scottish councils have never had a statutory obligation to provide sites for Gypsy/Travellers; some try, others do nothing. It is unfair, says John, to focus only the shortcomings of those councils that provide some facilities – many just keep their heads down. Although there is a national shortage of social housing in general, the Gypsy/Travellers are not asking for more than anyone else; if there had been no new building for the ‘settled’ community for decades, there would, says MECOPP (Minority Ethnic Carers of People Project), be an outcry. Whilst some sites are well run, many are poorly maintained and some are prone to such regular flooding that even developers don’t want to buy them.

More sites are urgently needed, but planning consent is a huge issue for Gypsy/Travellers wishing to set up their own; their applications are likely to attract a barrage of opposition from the local community. Planning applications are dealt with by local authorities, and central government can be reluctant to get involved, but John suggests that the only way for Gypsy/Travellers’ applications to receive fair consideration is to make provision for them to be submitted direct to the Scottish government. The panel singles out Aberdeen as particularly difficult – a wealthy city in which a large part of the population is not ‘local’. ‘How can they tell us to ‘go back where you came from‘ when many of them are no more Aberdonian than we are?’ asks Georgia. Indeed, an audience member comments that the travelling people of Scotland may be its purest race.

‘(There is a) need for greater accountability at local authority level to ensure that targets….are being met. This can only be achieved by a collective approach in the form of strong leadership at national level‘ (ibid).

The key to improvement, John feels, is education and training, which should be mandatory for all public officials working in local authorities, schools and the NHS. MECOPP, with which some of the panellists are involved, works for the rights of all ethnic groups; some of its members provide training to help raise awareness of the issues they face – John and some of his fellow MSPs were trained by them, in a session that John describes as ‘eye-opening’, but says not all MSPs want their eyes opened . Young Gypsy/Travellers are going into schools; one is working successfully with the very school at which she was bullied.

Poor living conditions combined with stress and the effects of living with long term stereotyping and discrimination are damaging to Gypsy/Travellers’ mental and physical wellbeing; their life expectancy is one of the lowest in Europe – possibly just 55 years. GPs often refuse to treat them – so they end up in A & E departments – and they frequently have to travel to get basic services. Both Georgia and Roseanna care for family members and they, like many Gypsy/Travellers, struggle to access support. The first Scottish Parliament Equal Opportunities Committee Enquiry was into Gypsy/Travellers and care in 2012. Whilst this community has a strong tradition of keeping its elderly and disabled members at home, carers need support wherever they live. The Scottish Parliament has raised the issues affecting Gypsy/Travellers, but MECOPP says that the failure of successive Scottish governments and/or COSLA (Convention of Scottish Local Authorities) to implement parliamentary recommendations means that few if any have come to fruition. Meanwhile the opportunities for Gypsy/Travellers to meet up are being taken away – fairs closed, traditional stopping places blocked off. As Georgia asks, ‘Will my daughter be sitting her in ten years time, telling you the same things, asking for the same basic human rights?’. Change, she says, must come from the top, and sections of the media must be stopped from publishing their vitriolic and prejudiced stories. ‘How’ asks Georgia ‘Can my children be proud of their heritage when all they see are these negative stereotypes?’ Many Gypsy/Travellers are skilled professionals, tradesmen and artists, but this is not how they are portrayed.

Moving Minds is a fascinating exhibition; Gypsy/Travellers’ history and their lives in days past are told alongside the experiences of a new generation. Precious possessions – from traditional jewellery made from old sovereigns to an old peg basket (It was ‘my Mum’s lifeline..it was freedom’) and a credit card belonging to one of the first Gypsy/Traveller women to have one (‘This card is my independence’) contrast with a Pedlar’s Certificate, granted by a local council in 1961 (‘You become a leper colony’).

Susan lives on the Double Dykes site in Perth; when it was built in the early 1980s these comments appeared in the press;

‘Where are the children of these families to be educated? Not in the local school, I trust?’

‘We are extremely concerned about the effect on our property…’

Thirty-five years later Susan and her daughters are still campaigning for basic human rights. As another Perth resident, Margaret, concludes;

‘To me it’s like the suffragettes, chaining themselves to the railings to be heard. Is that what Travellers have to do?’

This session was chaired by Dick Fitzpatrick and facilitated by the Just Festival in partnership with MECOPP. All images (unless otherwise stated) (c) Peter E Ross for MECOPP.

Moving Minds is at St John’s Church Hall, Princes Street 10am-1pm every day until 31st August 2015. Moving Minds: Gypsy Travellers in Scotland, edited by Michelle Lloyd and Peter Ross, is an anthology of work from Gypsy/Travellers across Scotland; contributors share their memories, poetry and photographs and reflect on the impact prejudice can have upon wellbeing. It is available from MECOPP at £15.99 (or the special festival price of £12 if purchased at the venue). MECOPP can be contacted at 172 Leith Walk, EH6 5EA (0131 467 2994).