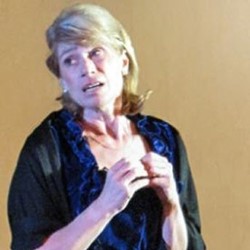 Performed by Julia Munrow at the Merchants’ Hall, Hanover St

The three lovers of Pre-Raphaelite painter, Dante Gabriel Rossetti are portrayed with an exquisite touch by Julia Munrow,

The first half sees her juxtaposing the bawdy housekeeper of Fanny Cornforth with the somewhat 19th century Desperate Housewife, Elizabeth Siddall. Both are besotted and deluded that they are the one an only muse of the famous painter.

Later on, Munrow also plays the delicate Jane Morris, who also defends her infidelity to her husband, William Morris.

Julia Munrow really inhabits the characters, especially Cornforth but she also builds up a picture of Rossetti, who we never meet but feel we get to know.