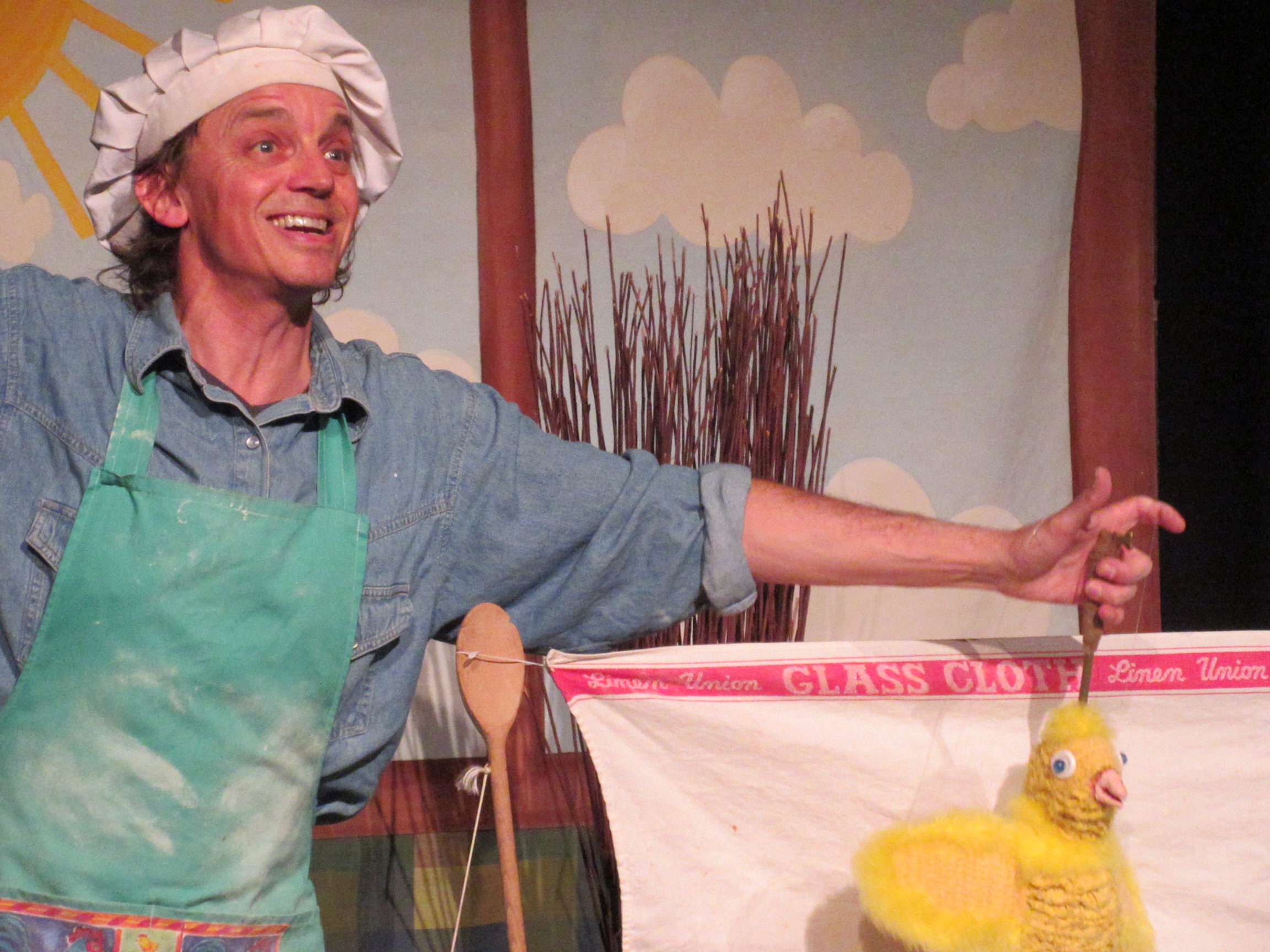 Wednesday afternoon’s audience for DNA Puppetry’s Chicken Licken and the Little Red Hen provides as many moments of hilarity as the show itself, a fast-paced flight through the adventures of the eponymous fowl, her friends Henny Penny, Ducky Lucky, Goosey Lucy and Turkey Lurky, and their hungry foe Foxy Loxy.

DNA’s Adam Bennett encourages the young audience to join in at every turn – and join in they do, with shrieks of laughter, shouts of advice, the occasional anxious question – ‘Will all the other ones be OK? When will they come back?’ (They don’t…) – and some slightly superior comments from the age 7 going on 27 girls at the front: ‘It’s a puppet‘. ‘I told you I was right’.

Bennett plays every character in this performance, and his voices are as wonderful as his mastery of physical theatre; the children clearly love seeing the mess he makes with the dough, his (failed) attempts to juggle with an egg and his hysterical gobbling turkey – in many children’s shows these visual gags are overplayed and lose the audience’s attention, but here the action is non-stop. The adults are catered for with sharp asides (‘It’s chicken in a sack!’) but it’s all good clean – or rather, floury – fun; no-one’s granny’s going to be scandalised. What’s more, the tiered seats of the old lecture theatre at Summerhall mean that everyone can see without standing on people’s heads. Like many fables and fairy stories, Chicken Licken and the Little Red Hen is not without its dark side. Foxy Loxy really is a bit creepy, especially when his tongue lolls out, and the fate of the heroine’s entourage did seem to worry a few of the children, though most were easily distracted by the next bit of slapstick. DNA’s puppets – and set – are simple but spot-on; Bennett brings Chicken Licken’s character alive, and not only via her rather dippy voice – the slightest nod of her head or waggle of her wings conveys her feelings brilliantly. The hen, turkey, goose and duck are seen only as shadow puppets behind a tea towel screen, but that doesn’t limit their entertainment value, and when Bennett bathes Chicken Licken in flour (‘a flour shower’) the little boy in front of me is delighted: ‘I think she likes it!’ Being the cynical old misery that I am, I sometimes feel that shows for children play more to grown-ups’ nostalgia-lust than to what today’s under-10s really want to see – a bit like educational toys, which seem to cater more for the aspirations of the parents than the pleasure of the mini-consumer; Chicken Licken and the Little Red Hen is an exception – it’s professionally performed, very funny, and just a tiny bit scary – a great afternoon for families.