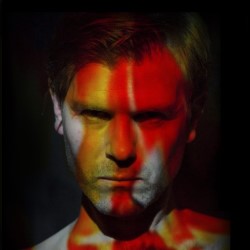 Good gentlefolk of Edinburgh – lock up your wives and daughters – the mad, bad and dangerous Lord Byron is in town.

But, with foppish hair askew and a now fading dandy wastrel palour, we fear the danger lies more in his wine-soaked introspections than his trousers. Paul Huntley-Thomas cuts a compelling dash as the priapic poet, iconic Greek liberation hero and card carrying member of the scandalous `League of Incest`. Deftly slipping between character and actor he immediately elicits sympathy from the audience as the next door’s show runs over time with a rock band finale. The venue layout is table candlelit, cabaret intimate.  Huntley-Thomas exploits this using poetic licentious to prowl amongst the tables eliciting a giggling frisson of fruitiness from a gaggle of young ladies. Gads, sir! there is life in the old dog yet – snooking a subversive cock at convention.

He takes us on a retrospective journey having once commended the audience for their thrift in choosing a budget ticket performance. ‘Who is here for my glitz and glamour, the fornication or the selected poetry?’ Sardonic, ironic – inimitably Byronic

The stage design is minimalist – that is, subdued ambient light and a chair. These are exploited with great effect by under-lighting our anti-hero that simultaneously casts a wall shadow profile – a subliminal cypher of the classic staircase climbing Nosferatu?

The epitome of infamy, the radical Romantic muse wright? Satanic succubus of seduction? Guru to the sexual revolution or revulsion? Take it anyway you like – Byron certainly did. As one of his more accommodating swinger friends once remarked about his spouse – you’ll never get a better bit of leacher on your wife.

Misunderstood, maligned, sometimes a mysoginist monster, far worse than Mary Shelly’s creation, he certainly established the template for Jim Morrison. A somber denouement then – a quietus of rage against the dying of the light. Of Lost loves and innocence, fortunes financial and moral.

‘A person’s life is less than a machine?’ You would never put Byron down as Luddite. As for the show title? Well, really!