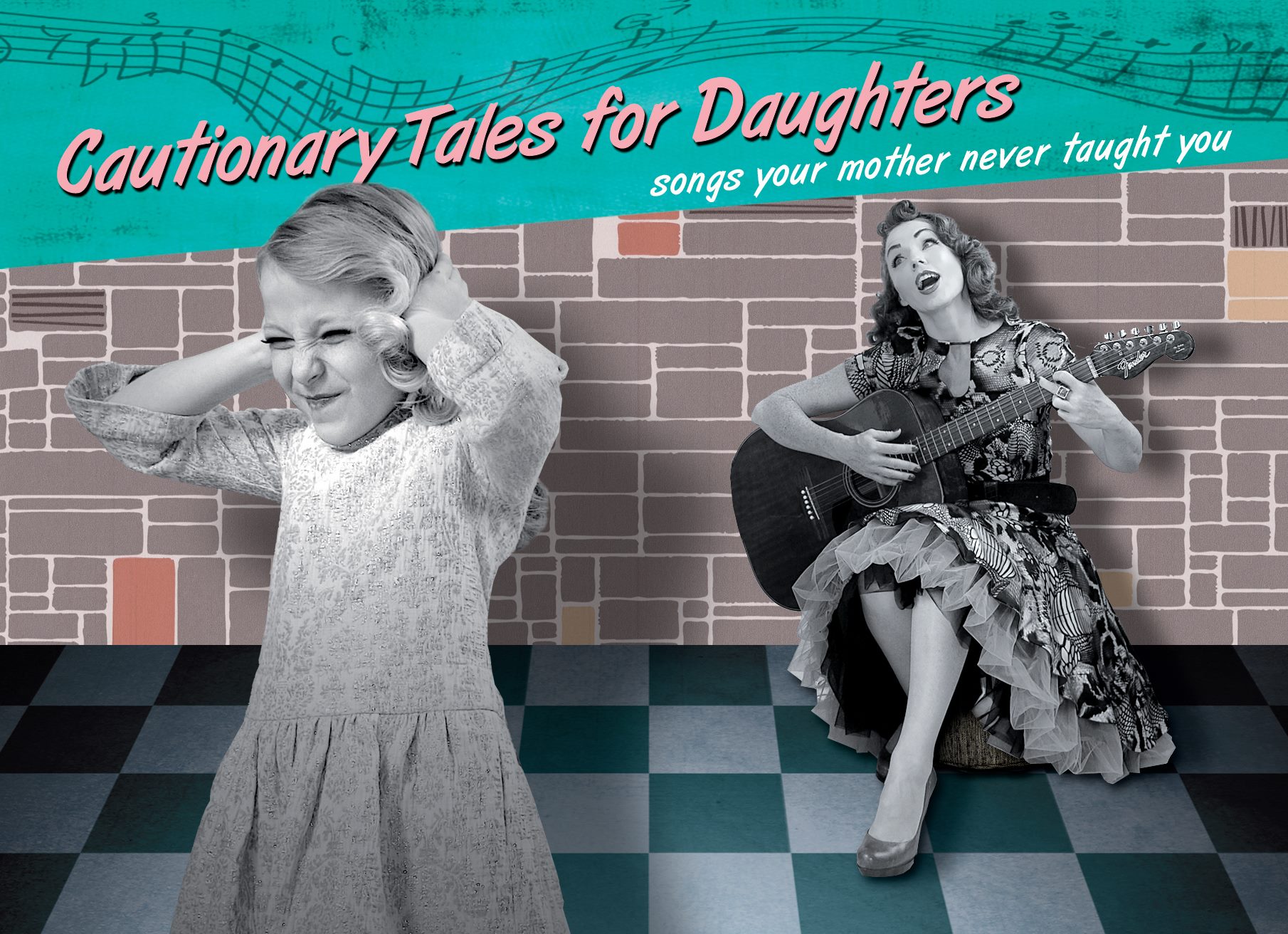 ‘I am an ordinary Mum,

To bouts of paranoia I regularly succumb’

Well, don’t we all? In fact, never mind bouts….for most mothers perma-panic comes with the territory. Binge drinking, eating disorders, overdrafts and inappropriate relationships….. and while we’re doing all that, goodness only knows what our daughters are getting up to.

Tanya Holt, composer, performer and mother herself, is already up there with the worriers – and her daughter Dottie is only 9. What, she asks, should we tell our female offspring? – or indeed, what do we wish someone had told our younger selves? In Cautionary Tales for Daughters, Tanya sings her way through a catalogue of advice:

‘I want her to be wary of how things can go wrong,

Say some nasty things within the comfort of a song’ And with a few well chosen props, a video and the very able assistance of musical director and keyboard and oboe player Suzie Shrubb, she does just that. Some of the numbers are very funny; the Tattoo Song is an hilarious reflection on the pitfalls of ending up with ‘rice fried with chicken heads’ engraved on your nether regions – ‘Don’t regret tomorrow what you ink today’, whilst The Story of A Labelled Girl is a highly entertaining tale of fashion victim Chanelle, who meets a sorry fate when she turns shoplifter to feed her consumer-itus. Even these songs, however, have an underlying blackness – the pressure to conform, whether by piercings or price tags, starts early these days; primary school girls are already worrying about make-up and designer clothes.

The Cowboy Song – illustrated by a sharp animation – addresses the ways in which little girls are encouraged to conform – or discouraged from being different; Mary wants to be a cowboy, but in the playground the boys won’t let her join in unless she takes the part of the saloon dancer – or the horse.

while at home her mother tells her ‘You should try being a princess’. The song’s chorus requesting a cowboy cake puts Mary firmly in her place. Try as we might to avoid the conditioning of our daughters, it only takes a look at a few TV adverts to see what girls are still up against. I have read that when children are asked what they want to be when they grow up, the response is now far less likely to be ‘a fireman/train driver/doctor/astronaut’ – no, what today’s children think they want is fame – they want to be a celebrity. In A Worthie Man of Fayre Garish Towne, Tanya and Suzie tell of a man who needs to get his three daughters off his financial back. One becomes a seamstress, one a baker, and the third seeks her fortune in the world of showbusiness, ending up in a 14th century version of the Big Brother house, ‘partially fameless and utterly shameless’, ‘from B List to Z’. She makes a mint, spends it all on drugs and drink, and ends up wanting only to hide from the world – but her Dad won’t let her because – guess what? – he’s reaping the rewards of her ‘career’. Sound familiar? And which woman of my generation doesn’t have an issue with food? Growing up as we did, with a constant barrage of diets (thank you, Jackie), all of which seemed to involve cottage cheese and a scraping of some spread that no-one could possibly believe bore even a remote relationship to butter, is it any wonder we have long lost any sense of control – or enjoyment – over our intake? Try as we might not to pass our hang-ups on to our daughters, they are under even more pressure than we were. In a song with very little to laugh about, Tanya’s Cherry The Amazing Yo Yo Girl swings from skinny to supersize and back with monotonous regularity;

To binge and starve and binge again’

Two issues that no-one should find funny are sexual harassment and domestic violence, and Cautionary Tales treats both with the seriousness they deserve. In It’s All Your Fault, Tanya addresses the ways in which women are made to feel guilty, they ‘can’t take a joke’, they ‘have it coming’.

Perhaps the saddest song in the show is Red Flag Flying, based, says Tanya, on this question, asked by a friend of hers: ‘How many times is it OK for a man to hit you before you need to leave?’ Drawing parallels between swimming in dangerous seas and staying with a dangerous partner, Red Flag Flying is a beautifully sung with a haunting warning.

Procrastination…well, we’re all going to act on our plans sometime, aren’t we? It’s just not a good time right now, OK? Hugh Laurie apparently said ‘It’s a terrible thing to wait until you’re ready. No one is ever ready to do anything’ and the show ends on an optimistic note with a song that sends our daughters a powerful message – get on with it;

‘Tomorrow was made for you’

Tanya and Suzie are talented, warm and engaging performers and Cautionary Tales is a slick, well presented production; it makes you laugh but it also makes you think. At the very least it’ll make you think twice about dodgy tattoos. Do go.