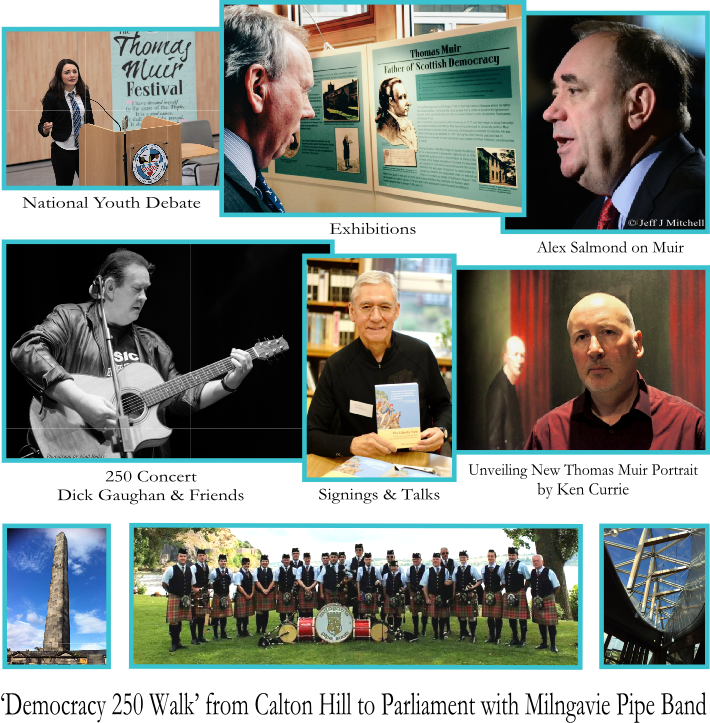 ‘We have achieved a great duty in these critical times…we have been the first to revive the spirit of our country and give it a national existence’ (Thomas Muir, 1798)

‘We unite behind a declaration of self-evident truth…We want a Scotland that’s greener, that’s fairer and more prosperous. We realise that the power of an independent Scotland is necessary to achieve these ends’ (Alex Salmond, 2012)

Over two hundred years separate these statements; each speaker sought in his own way to bring reform to Scotland.

On 24th August 2015, Alex Salmond, MP for Gordon, MSP for Aberdeenshire East and former First Minister, will give the inaugural Thomas Muir Memorial Lecture to celebrate the life of the radical agitator and democratic hero, Thomas Muir the Younger of Huntershill. At the age of 26, Muir led a movement demanding the vote for the ordinary men of Scotland.

‘He sought, like all great men, to attain the unattainable, knowing that the alternative is to bear the unbearable’ (Oliver Brown).

In 1785, having expelled himself from Glasgow University after supporting the loser (Professor John Anderson, who later founded the forerunner of Strathclyde University) in an argument with the Faculty of Advocates, Thomas Muir became a lawyer in Edinburgh.

Within three years of passing his Bar examinations, Muir was acting for the congregation of his home parish of Cadder in a dispute with local landlords over the selection of a new minister; he became known as a man of principle, challenging the many laws he considered to be biased against the poor. In 1792 he was instrumental in setting up a nationwide network of reform clubs, the Scottish Association of the Friends of the People, in support of emancipation and the principles of the French Revolution; he also sympathised and corresponded with the United Irishmen, the Irish nationalist movement of the time.

By 1793 Muir had been arrested and tried on trumped up charges of sedition, thrown out of the Faculty and sentenced by Lord Braxfield (of ‘Let them bring me prisoners and I will find them law‘ fame) to fourteen years’ transportation; he arrived in Sydney in 1794, one of Australia’s first political prisoners.

Muir eventually escaped to California but was shipped back to Europe by the Spanish; during the journey his ship was engaged in battle with the British and he suffered severe facial injuries from flying shrapnel. He was released (and banished) by the Spanish and finally ended up in France, where he died in 1799.

In 1982 a young Alex Salmond was expelled from the Scottish Nationalist Party for being a leading light in the left wing 79 Group. He was readmitted a month later, elected MP for Banff and Buchan in 1987 and leader of the SNP in 1990. He was a vocal opponent of Tony Blair’s decisions to back NATO bombing in Serbia in 1999 and the invasion of Iraq in 2003. He became First Minister of Scotland in 2007 and called the 2014 Referendum on Scottish Independence. Resigning as SNP leader in November 2014, he was elected as MP for Gordon in 2015, winning 48% of the vote. He is the author of The Dream Shall Never Die: 100 Days That Changed Scotland Forever. The Friends of Thomas Muir are commemorating the 250th anniversary of Muir’s birth with a series of events throughout Scotland. The anniversary has already featured on STV and BBC Radio, and in the coming months there will be further events in Glasgow, Edinburgh, Bishopbriggs, Cadder, Kirkintilloch and Alloway. On 24th August, prior to the Thomas Muir Lecture, Murray Armstrong, former Guardian journalist and author of The Liberty Tree, an historical novel about Muir’s life and struggles, will talk about Muir’s legacy as part of the Edinburgh Fringe Book Festival.

A re-examination and partial re-enactment of Muir’s trial in Parliament House, a Scottish National Portrait Gallery tour of works relating to him, an exhibition at the Central Library, a reception at the Scottish Parliament and a Democracy 250 Walk from the Political Martyrs’ Memorial in Old Calton Burial Ground to Holyrood have also been organised; details may be found at www.thomasmuir.co.uk.

The Thomas Muir Memorial Lecture will take place on Monday 24 August 2015 (7pm for 7.30pm) at St Mary’s Cathedral, Palmerston Place. Tickets are available from the Cathedral Office (0131 225 6293) or from the organisers, Word Power Books (0131 662 9112); a suggested donation of at least £5 per ticket is requested. Murray Armstrong will speak at Word Power Books at 1pm on 24th August: this event is free (donations appreciated) and no booking is required.