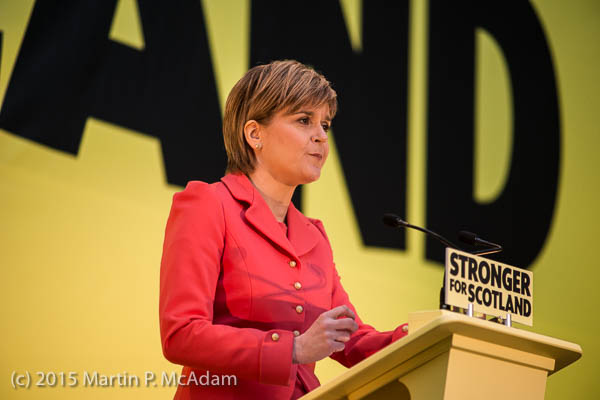 A major Scottish environmental group has called on First Minister Nicola Sturgeon to “urgently” publish details of a meeting she held with a billionaire energy tycoon on the subject of fracking.

Ineos boss Jim Ratcliffe earlier claimed to have received private assurances that the SNP is ‘not opposed’ to fracking in Scotland.

Dr Richard Dixon, Director of Friends of the Earth Scotland said: “Given that Jim Ratcliffe is now using his conversation with the First Minister to back up his claims on fracking, Nicola Sturgeon urgently needs to publish a note of their meeting and make a statement on what she did and didn’t say to the Ineos boss.“

The Scottish Government announced a moratorium on fracking on 28 January 2015 pending a health impact assessment report, a public consultation, regulatory reform and planning reform. It was later revealed that Nicola Sturgeon was meeting with Mr Ratcliffe on the same day.

”The Scottish Government is officially neither for nor against fracking, that is after all why we are having a moratorium while the evidence is examined and the public are asked what they think.” said Dr Dixon.

“We don’t share Ineos’ rosy view of the world. We’re convinced that Scotland will move to a full ban on fracking when we’ve looked at the evidence of health impacts, environmental contamination and climate change emissions that this industry has brought elsewhere.”

A Scottish Government spokesman responded by saying the meeting was nothing out of the ordinary.

“As previously published correspondence shows, the meeting with Ineos was just one of the regular meetings that ministers have with the whole range of stakeholders in the energy and environmental sector.

“Mr Ratcliffe’s comments simply reflect what we have already said publicly on this issue – no fracking can or will take place in Scotland while the moratorium we have announced remains in place, a policy that has received wide support from both environmental groups and industry.”

Dr Dixon argued that this is a dangerous move by the SNP.

”Labour’s strong position on fracking is going to make the SNP look weak unless the party goes beyond a neutral stance in the run up to the Scottish Election.

“With many SNP MPs elected on a no fracking promise at the General Election, the SNP as a party will have to go further than the SNP as the current government of Scotland to remain credible on this issue.”

However the government stated that they are looking at all options very closely.

“We are taking a careful, considered and evidence-based approach to unconventional oil and gas, and the moratorium and the planned public consultation will allow all stakeholders and local communities to have their say.”

Alison Johnstone, Scottish Green MSP for Lothian, is sceptical of the claims made by Jim Ratcliffe that Scotland is soon to be opened up for fracking. The MSP said:  “We know that the Scottish Government’s moratorium is only temporary, however, the strength of public opinion on the matter that helped us achieve that measure gives me full confidence that the Scottish public will continue to be heard.

“The latest comments from Mr Ratcliffe are not surprising given his vested interest, but what I would find surprising is if his vision of a Scotland with more polluting fossil fuels at the heart of our industrial future is shared by the majority of Scots.

“Scotland has what it takes to develop a jobs-rich economy focusing on a reindustrialisation programme which respects the environment, and also respects the rights of employees to organise and have their interests represented by a Trade Union.

“Unconventional gas extraction doesn’t lend itself to community ownership as renewables do, but sucks investment and talent away from jobs in the industries of the future. I hope the wishes of the Scottish electorate carry proper weight with SNP Ministers.

“We have come a long way since I led Holyrood’s first debate on fracking in May 2014, proposing a ban. All other parties voted against my calls at that time, but the Scottish Greens will continue to lead calls for the current pause to become a full ban on this dirty and unnecessary method of extracting yet more fossil fuels.”