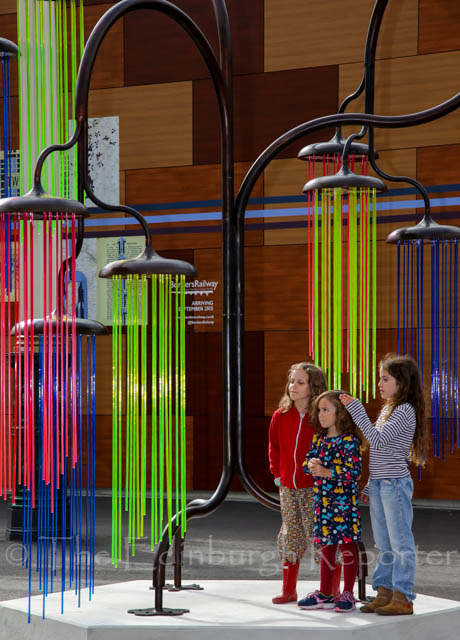 I’ve watched the Edinburgh Festival come and go for over 30 years and every year it gets bigger and noisier. I love it. It’s like watching the annual migration of skeins of cultural geese. The visitors fly in, in their hundreds of thousands, doubling the population of the city. They squawk their way round the concert halls, theatres, tents, fringe venues, pubs, cafes, hotels, B&Bs, student hostels and rented flats. A good proportion of them are performers themselves, from the 160 shows in the official festival and the 3,300 shows on the Fringe.

There’s a deathly quiet before they all arrive and a great sense of loss when they all fly away. We have to wait for the arrival of the winter migrants, the students, in September before the city can get back to normal.

As I write, the Edinburgh Arts Festival has already started with a strange bronze tree with colourful acrylic branches planted at Waverley Station. The official International Festival opens with a free laser-and-music show outside the Usher Hall. The theme this year is “technology” and includes Beethoven’s Fidelio set on a doomed spacecraft and a show at Ratho quarry, the international climbing centre, which takes its audience on a journey to an imaginary Other Earth. The Edinburgh International Book Festival too has the theme of a journey, a voyage of discovery, accompanied by 800 authors from 55 countries around the world.

The Fringe, of course, defies the boundaries of any theme but this year again it is dominated by so-called “comedy”….it’s over a third of the 387 page programme. I must say I’m appalled by most of what goes on the non-music stage during the festival ( but I’ll defend to the death the performers’ right to do it.) I don’t find their comedy funny, or their satire or cynicism particularly helpful and most of the theatre productions are much too challenging for me. I want to come out of a theatre feeling better not wretched. It’s hard enough to cope with real life, never mind inventing more misery on the stage.

Take the sad case of real human migration for instance. Scotland is well insulated from the troubles at Calais – or so we thought, until our prawn and crab fishermen couldn’t get their produce to the markets in Spain in time. The Scottish government says it’s up to the UK government to sort the chaos at Calais out. I suggest that it starts by taking our share of the refugees fleeing to Europe from the civil wars in Syria and Iraq.

Earlier this week I watched the television debate between the Labour leadership contenders in Scotland, Kezia Dugdale and Ken Mackintosh. What struck me most was how strong the “Corbyn effect” was in the audience. Both candidates were forced to fix their positions in relation to Jeremy Corbyn’s left wing challenge for the UK leadership. Perhaps the age of austerity is coming to an end after all. Nicola Sturgeon, on a First Ministerial visit to China, must have been smiling quietly to herself at Labour’s distress. And indeed all of us were blushing when The Sun revealed that the Labour stalwart Lord Sewel was up to some curious practices in his spare time.  At last the media had something else to talk about other than their never-ending obsession with when the next independence referendum is going to be.

The SNP government, though, has its own troubles. Both of its major structural changes, to the police and the fire services, are now showing signs of weakness. Last week it was the new centralised Police Scotland failing to respond to a car accident on the M9 which left a young couple dead. This week the centralised fire service finds itself on the brink of industrial action by backroom staff over cuts in pay, caused by a reported £50m shortfall in the service’s funding. You have to wonder if centralisation is the way to achieve efficiencies.

Finally, I wonder if the cultural geese mentioned above are troubled by seagulls. Everyone else seems to be, from the Prime Minister down. David Cameron has called for a “big conversation” about what to do about aggressive seagulls. It follows a series of attacks on dogs, tortoises, young children, and people eating bacon butties, mainly along the Cornish coast. But a man from Barrhead in Glasgow also caused a national stomach upset when he published a photograph he’d taken of a seagull devouring a mother starling whole. And in Aberdeen, the football club has confirmed that it’s using a hawk to keep the seagulls out of Pittodrie.

But in Aberdeen, a group of photographers, artists and poets have got together to mount a campaign in defence of the seagull. They’ve published a book praising “the grace of this delightful bird” and they’re giving the proceeds to the RSPB.

It will probably create quite a splash at the Book Festival!