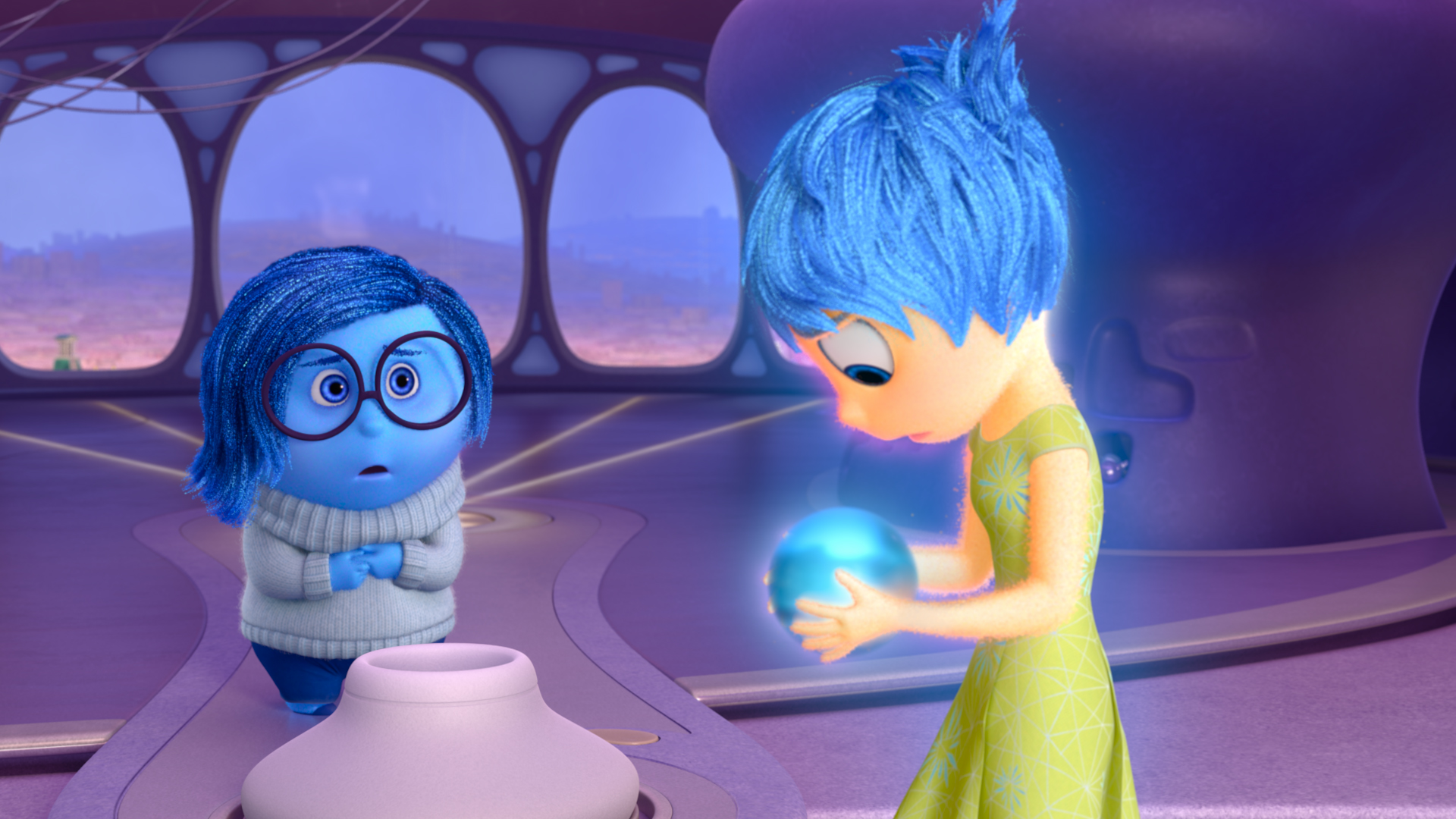 The first time Pixar’s Ronnie del Carmen made himself known to us was in the waiting lounge of Edinburgh’s APEX Hotel in search of a restroom. “Hey guys,” he grins, “I won’t be a minute!” He is at the helm of one of the decades most widely acclaimed films, and yet still felt it necessary to let us know he’d be quick on his bathroom break.

Inside Out’s Ronnie del Carmen has a sort of welcoming warmth that you may not have expected. Of course, the highly hailed group of imaginative people at Pixar should be, like their films, grinning from ear to ear, but when you consider the incessant press tour that has arrived on his doorstep almost unannounced, it’s a miracle del Carmen has even made it here at all.

The studio’s latest output, Inside Out is a thoughtful piece of work both literally and figuratively. Set inside the mind of an 11 year old girl named Riley, it looks at the emotions that run around our heads keeping everything running like clockwork. On screen, it exudes the sort of uncomplicated ease we have come to expect from the Pixar roster. With standing ovations and cheers in the Grand Théâtre following its lauded Cannes debut and a position as the States’ highest grossing opener for an original film, what was it that kept the company coming back to the quieter grounds of the Edinburgh International Film Festival?

“It’s wonderful here, for one thing, isn’t it?” He reaches out his arms as if there was no need to ask such a silly question. “It’s fantastic. It’s a hub for stories, and the studio is devoted to storytelling. A lot of people assume it’s just an animation studio, but the hardest thing that we work on is our stories.”.

Such passion came at no surprise. Thirteen years ago, del Carmen first stepped into the Pixar offices as the Story Supervisor on the wonderful Finding Nemo, and since then has had a hand in creating nearly every other notable output of the company to date. He had the same role during the production of Pixar’s most weepy affair, the balloon-fuelled flyaway beauty that was Up.

With almost no human touch, Pixar makes you empathise and shed tears for something that we’ve never encountered face to face: emotions. The delightfully annoying Bing-Bong, Riley’s imaginary friend serves as a reminder of the passage of time existing even when you’re still a child. It’s heart wrenching; moving even the coldest of hearts. If you take a quick glance around the cinema, you will find that people of all ages will be shedding tears, something that del Carmen said was more integral than intentional. “One of the things me and Pete (Docter, his fellow director) had talked about was that if we were going to make a story about emotions that we better make it emotional. Usually we talk about challenging circumstances. We make entertaining movies. We know how to laugh and feel joy but one of the things we’re really not good at as human beings is having to deal with difficult feelings; complicated ones. We try not to show it, we try not to give in to it. When you’re facing a movie, you’re empathising with the story – the tears run.” With the same exuberant passion he discussed Edinburgh with, Ronnie was now talking about something on the opposite end of the emotional spectrum. “I’ve experienced that as an audience member,” he confessed, “but you don’t want to talk about that to other people, or you try not to. It’s easier to be in the dark, facing a movie and empathising with these characters. Hopefully [with Inside Out], you can talk about it afterwards with other people! As a society, we find [sadness] to be a sign of weakness, but it isn’t because we all go through it. It’s sort of liberating to say that.”

All of this old fashioned hearsay that made Inside Out a popular affair has translated into a fizzing box office record. But for Ronnie, the dollar signs that sit next to his film mean nothing, it’s the people behind those numbers that matter. “When a movie reaches an audience, and that story and those characters get that praise it’s thrilling,” he said, “I don’t even count the numbers, I just read people’s reactions!”

Pixar have this wonderful habit of putting together a cast that is sort of incongruous to the massive box office takings that inevitably follow. While this remains the company norm, Inside Out acts as a slight intermission to the rule. With a cast that includes the SNL alumni Amy Poehler and Bill Hader as well as The Office’s ever endearing Phyllis Smith, there are a few major Hollywood names behind the voices of the characters. Poehler had unwittingly stepped into the shoes of the lead character Joy before she had even been asked to play her. In the early stages of the film’s production, del Carmen and Docter would be discussing how Amy would read the lines for a role she hadn’t even been asked about yet! Ronnie vividly remembers the moment she signed the dotted line, reenacting the clenched fists in the air yelling “Yes!” as he heard the good news; with Poehler, they were lucky. “The first time [Amy] read the script, she started taking notes on Joy and performed Joy much more than we had imagined. She turned the character and her own personality into Joy, and so there’s no question that Amy herself is like [her]. She’s very inclusive, very positive, she wants to make sure that everyone does well.”

In the past, Pixar has injected a huge amount of imagination into real life situations. Worlds in which fish, insects and even Cars can talk. But while these films had the limits of the creator’s imagination, Inside Out, realistically, had no starting point at all. With a creative process of near five years, there must have been some brick walls that were difficult to climb. “They were all hard to overcome,” he concurs, “because you were telling the story of a place that nobody has ever actually been to.” He almost summarises Inside Out’s impressive complexity in one fell swoop.  “There are no rules we can understand. So, if you’re telling a story about an old man who wants to fill his house with thousands of balloons, you have things in place: gravity, what the house is made of. You can kind of see what they all do and so this is easily understandable when people watch it.” Ronnie lightly slammed his hands to the table, perhaps reminiscing on those formerly unsurpassed barriers Pixar battled with. “We don’t have any common ground when we say, what is an emotion? What is the mind world like? So we have to make sure that everything we create feels somewhat understandable and that those systems don’t contradict each other. That itself is a five year journey, to make sure that everything we put in place doesn’t become confusing.”

That’s probably the reason behind how deft, moving and impressive Inside Out really is. This is a film with no limitations: implausibility wasn’t ever a factor. In the past, reality has always kept the company grounded, yet their results have always been surreal. Now, their latest work acts as their first creation of a whole new universe, with no solid reference points. In a way, Inside Out is Pixar really coming out to play.

It bursts onto the screen with the plethora of human emotions condensed into Joy, Sadness, Anger, Fear and Disgust. Scientific studies show that there are more than 70, which questions how del Carmen and Docter whittled them down to just five. In the laborious process, several made appearances but didn’t quite make the cut. “We had the idea of having an outer ring of characters that would be waiting in the wings, sorta poking their heads through saying “Hey, I’d be useful!”. One of them was schadenfreude (pleasure from the misfortune of others) and another was ennui (eternally bored and dissatisfied). But it wasn’t relevant to the story! It made people ask more questions.” He delved into more of these forgotten emotions, “We used to have Hope, always ringing her hands hoping for the best things to happen or for the bad things to go. She became terribly limited, we realised we couldn’t write her dialogue without using ‘I hope’, so she was gone! Then we had Surprise, who was always surprised by things.” Out of nowhere, del Carmen slipped into the cast out character’s personality, mouth agape with his head in his hands like the Edvard Munch painting, “but she became a one gag character. That’s all it was: trial and error. Our stock and trade at Pixar consists of ‘Let’s try it!’ Why? Because we don’t know if it’s not gonna work. And if it doesn’t work, we can throw it away!”

Later, Ronnie mused over which emotion sits at the control panel in his head. “There’s two that would definitely qualify. The character I can most relate to is Joy. Being a parent I always want my children to be happy.” And the other? “The most native emotion in my head would be sadness. At the studio, I look after all the scenes that are about making people cry. I’m a professional sad maker.” That single statement defines everything that’s great about Ronnie del Carmen and his co-workers. In an industry brimming with hyperactive, saccharine sweet kids movies, Pixar deliver a refreshing dose of emotive reality – not depressingly tragic nor overly complicated, but something that’s simply a necessity.

Inside Out is released in UK cinemas on July 24th 2015

This interview was conducted on June 21st in Cannes.