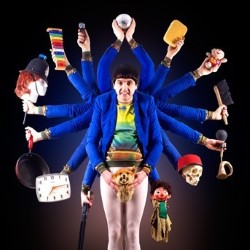 SPENCER JONES is THE HERBERT in ‘PROPER JOB’

Last year Fringe audiences sat enthralled by the calamitous goofery of Spencer Jones’ The Herbert as he valiantly tried – and failed – to look after his baby while not playing with any of the power tools that were left tantalisingly around his house by his builders.

The Herbert has been very busy since then. He has a two-year-old son now, so he’s having to buck up his ideas and provide for the family. Time for a proper job. But where could he work? A hospital, a hairdressers, or perhaps as a children’s entertainer, he’s always made his son laugh…? But there’s something wrong with his son. Doctors don’t know what caused it, though some local people say it has something to do with the accident at the nuclear power plant nearby. The incident was nothing to do with The Herbert, honest. But he did work there for a day, and that was the day it happened…

Meanwhile, in the midst of all this worry, The Herbert has been frittering away some money he inherited on expensive-yet-useless items he finds on the internet. His wife is not happy and wants him to get a proper job before the money runs out.

The Herbert doesnt want to get a proper job. He wants to be Fat Boy Slim.

A show about failing, failure, how to fail and why you sometimes have to fail to win.

Spencer is a student of Philippe Gaulier and Edinburgh Comedy Award winner Doctor Brown. He was nominated for a BAFTA for his debut television show Big Babies, which has been sold around the world and is currently being remade in the US. Among his other screen credits are: Hollyoaks, Pulling, Skins, Count Arthur Strong and Christopher Guest’s Family Tree.

Spencer has juggled various jobs including street performer, wedding singer and radio presenter. Proper Job is Spencer’s second solo show at the Edinburgh Fringe. He has also appeared in the play Charlie Baker’s Wedding Band in 2011 (****The Scotsman). In the last 12 months Spencer has been nominated for a UK Barry and was runner-up in the New Act of the Year (formerly Hackney Empire New Act of the Year).