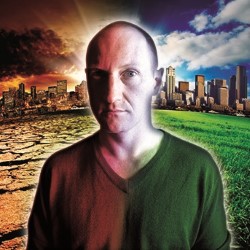 …and finally, the weather – Tempest in a teacup or a poisoned chalice?

Written and performed by Baba Brinkman

Back yet again to the Athens of the North the Philosophical groover from Vancouver, Baba Brinkman, brings his unique take on the Hip-Hop, Freestyle genres of Urban uber cool-munication, agitation and revelation. His UK Premier of Rap Guide To Climate Chaos comes with a driving urgency, bristling with stealth-lecture and disabusing the conjecture. Brinkman’s rigorous research weighs the stats, balances the facts – his conclusions are wincing and convincing – but maybe just not quite the end of the World as we know it – and reassuringly Globally heart-warming to know. Perhaps he will tell a few gags about TOT (total toxic overload) that will just utterly slay the audiences? And that final weather report? It is not a matter of whether – but when.

“Rap Guide to Climate Chaos” flips the world on its head. Rap music becomes an intellectual art form, environmentalism invokes delight instead of depression, physical science becomes comedy gold, and the audience is taken on a journey through the history of human progress, as we unlock the hidden energy in fossil fuels, nearly destroy the balance of nature, and then miraculously change course in the nick of time to prevent disaster. Or not, we’ll see what happens. www.gildedballoon.co.uk

“Baba Brinkman is a pioneer of a whole new approach to theatre, bringing the excitement of a rap concert together with the wit of a stand-up comic and the mind-expansion of a TED Talk. Recently nominated for a Drama Desk Award in the category of “Unique Theatrical Experience”, Baba premiered this hybrid concept at the Fringe in 2004, and it has been a hit with audiences worldwide ever since. Baba comes from a family of climate change activists and environmental entrepreneurs. Before his career in performance he worked for the family reforestation company for ten years.” Off the Top
Comedy (science, improv)

Fringe First winner and science rapper Baba Brinkman (Rap Guide to Evolution) teams up with neuroscientist Dr Heather Berlin to explore the brain basis of improvisation. What’s going on under the hood when a musician or comic improvises, and why are the spontaneous moments of life the most memorable? A married couple in real life, Baba and Heather share their love of science and creativity, with featured guests and unscripted moments of hilarity.

‘Geek heaven! Who says science is boring?’ ***** (The Edinburgh Reporter)