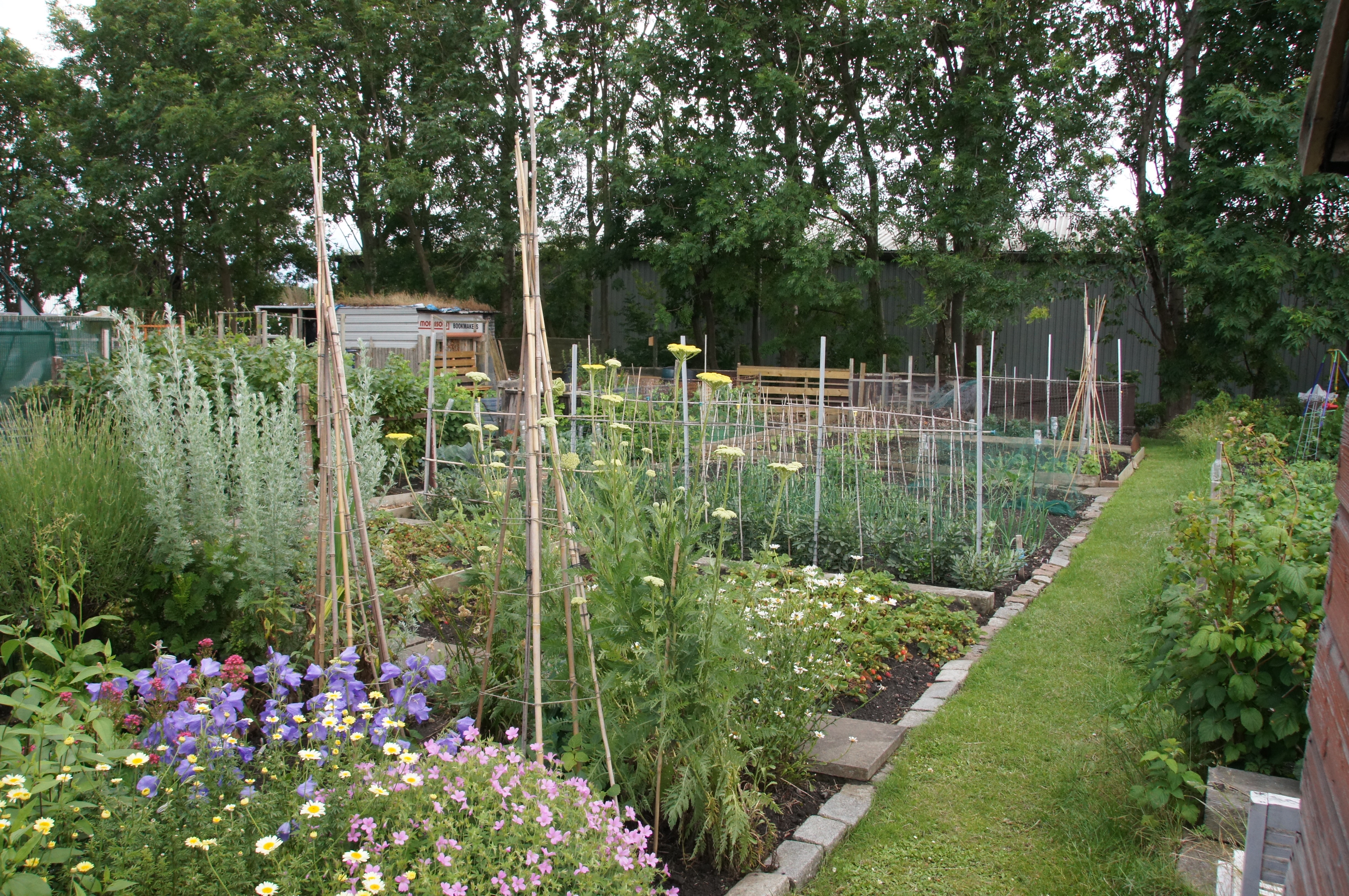 The plotholders at Craigentinny/Telferton Allotments are under threat of eviction, but then that is nothing new for them. In 1998 they fought off an application to erect 55 flats in three blocks on the 1.5 hectare site. The council refused the application but the developer who by now owned the land appealed the decision to The Scottish Government though the Reporter refused their appeal.

In 2007 the developer submitted another request to the council to change the use of the site from open space to housing development in the city wide planning review. Although the council refused such a change, the site was again the subject of a government enquiry.

In 2015 it appears that there is another shot across the bows looming. Since 2010 the land has been protected against development by being zoned open space, but the owner (now under the name Gladedale Estates) has expressed its wishes in 2013 and 2014 to have the land rezoned.

They did this within their responses to both the first and second drafts of the Local Development Plan (LDP) in identical terms. Their reply said: “The current policy allocation, and the proposed allocation in the new LDP, reflects the current use of the site as allotments.  However, this use of the site for allotments is unauthorised, and the occupation of the site has not been sanctioned by the site owners.” The area has been used for allotments for around 90 years, but clearly the landowner is again taking a stance against the occupants. The South of Scotland Electricity Board (SSEB) set the land aside for use by their employees as allotments back in the 1920s.

This photo shows how the area would have then looked. The allotments formed a natural boundary between the houses built there and the area where coal was stored for use at the power station.

But back to the planning process. The landowner lodged this demand with the City of Edinburgh Council in the LDP consultation :  “We would therefore request the allocation of the site at Telferton for new residential development for approximately 30 units.”

The developer showed on the plan attached to their response that some of the land could be retained as about 24 allotment plots. Allotment plots must be 10 x 30 metres and there are currently around 85 plot holders at Craigentinny and Telferton. The site is divided by the road which goes into the Industrial Estate, but the allotments on both sides are run as one association.

The second draft of the LDP was approved by councillors in May and submitted to the Scottish Ministers for a process called ‘examination’. It may be some time before it is approved, but the long stop date is February 2016.

Avant Homes is now the name that Gladedale is trading under and their spokesperson told The Edinburgh Reporter: “Following our initial public consultations in June 2015, we intend to submit a planning application for a mixed development of housing and allotments on the site at Telferton in Autumn this year.  At our public exhibitions of the plans, we encouraged people to send us their thoughts on our proposal, and have taken all comments into account when putting together the final planning application.

“We believe that our plans would greatly benefit this area, not least because they will provide security of tenure for the allotments – at present, the allotments on this site do not have any agreement in place with the landowner.”

The allotments were originally set up for workers at Portobello Power Station on Portobello High Street, although the power station was demolished in 1977.

During one of the last planning rounds it is reported that JCBs entered the site to rip up trees and flatten sheds but they were stopped by police. The builders state in their planning response that the site is a viable one, and they appear to think it would ensure a good return on investment for them. The allotments are set up as a charity and at their 2013 AGM they discussed ways of raising money to buy the land, perhaps by getting money from the Scottish Government’s land fund. Their dreams of buying the land are not dead, and all of the plot holders The Edinburgh Reporter spoke to were determined to do something constructive in that regard.

The council have an allotments strategy called “Cultivating Communities” the terms of which were agreed five years ago. Councils have a duty to respond to a demand for such spaces in terms of legislation, and this document sets out ways that they would do this. In 1998 the waiting list for an allotment was just over 400 people but as at five years ago the waiting list stood at 2367 for around 1200 plots which the council own. Some of these waiting lists are lengthy as turnover in ownership is  quite low. Consequently the time you might have to wait for a council-owned plot is anything between four and seven years. The waiting list at Telferton is about 4 years too. Councillor Stefan Tymkewycz met with the management committee of the Telferton Allotments recently and listened to their concerns regarding yet another potential application for building houses on the allotments.  The committee also highlighted the fact that the allotments area is ‘zoned’ for allotments, which Cllr Tymkewycz is aware of. He explained to The Edinburgh Reporter that he did not make public his view of any proposed development as this would bar him from a future vote, for or against, on the application if it came to a full council meeting.

Elsewhere in the city, in an effort to cut the waiting list the council has set up some new allotment sites in recent years. Some raised beds have been formed at Drum Brae, others were opened in 2011 at Inchkeith Court, Dumbryden and India Place.

The Edinburgh Reporter spoke to Northfield and Willowbrae Community Council who told us: “At our recent meeting the  Community Councils around the allotments decided to work together to support the allotment holders.  This is the third time this 90 year-old site has been threatened and we reckon that taking on the planning system is something where they need all the help they can get. Next year the Community Empowerment legislation should make protection much easier but for now it is wellies versus hobnailed boot.

“Allotments aren’t quaint; they are the modern way to provide quality food, flowers and fun.”

It is clear that having an allotment in Edinburgh is popular, but it also seems that allotment holders are a pretty active bunch. In response to a budget proposal earlier this year to increase the rent at council-owned allotments, The Federation of Edinburgh and District Allotments and Garden Associations (FEDAGA) and allotment holders across the city were the most vociferous group and lodged 99 responses to the council’s consultation document.

The City of Edinburgh Council in common with many others across Scotland finds itself with a funding gap and must make savings of around £20m a year in its expenditure. The Finance Convener had proposed raising an additional £150,000 of revenue through its allotment fees, simply by putting them up.

FEDAGA had made some constructive suggestions such as charging those who wanted to be put on the waiting list, enacting a joining fee for first time allotment holders and using environmental wardens to help implement the allotment rules. There are some people who own allotments but who do not tend them properly and FEDAGA feel that this needs to be enforced. It would mean shortening the waiting list and also perhaps increasing council revenue through a fine structure. Nothing has yet been done to implement any such proposals however. Currently a council-owned allotment would cost you £100 a year but the rent in Craigentinny and Telferton is £40 for a full plot, or £20 for a half plot.

Dave Roberts has had his allotment at Craigentinny and Telferton for eleven years. He told The Edinburgh Reporter :  “I love it. The benefits are manyfold – exercise, companionship, outdoor activity and many more.”

Meantime the Association has lodged an application to The City of Edinburgh Council to determine the existing use of the land as open space. The application has been made in the name of Rachel Purnell as a representative of the Craigentinny and Telferton Allotments Association which is a limited company with charitable status. It explains that the site has been used continuously as allotments since 1923. The supporting documentation includes extracts from a minutes book kept by the association since it first met in 1923, as well as sworn statements from a number of allotment holders. You can read the application in full here.

The Association also have a Facebook page where you can keep up to date with their gardening and also their campaign.

A member of the Association’s steering committee, Rachel Purnell is herself an allotment holder who has gardened here for 17 years. She said: “Gradually over the years I have managed to work all the beds and now I grow my own fruit and veg. I’m a committee member and I’m working with the rest of the committee to campaign against the planning proposals by Avant Homes. This is the third time we have been under such a threat, but now we have an online petition and we have spoken to many householders and allotment holders to gather support for that.  I would like to protect it as a community asset as it involves lots of local people here.”

The committee has also produced a leaflet explaining their campaign to save their allotments which you can read in full here: