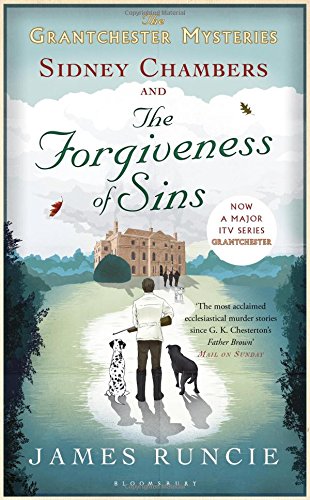 James Runcie has just been stuck in the lift at Blackwell’s – ‘The calm preparation has gone’. Except of course it hasn’t; without missing a beat he launches into his funny, interesting, and above all human talk about writing, history and life. The author of the Grantchester Mysteries – now televised, with James Norton playing the deliciously troubled vicar Sidney Chambers – isn’t the son of our former Archbishop of Canterbury for nothing; he learned how to play an audience from the very best, and now here he is, making us laugh but also making us think. The Grantchester novels cover the period 1953 to 1978 (though James hasn’t finished them yet, so who knows?). He wanted to write about social history and crime whilst at the same time looking at the pace of change in modern British life. When did Modern Britain begin? Some would say in 1945 when the war ended, others 1951, year of the Festival of Britain – but James chose 1953 (six years before his own birth), the year in which DNA was discovered and, perhaps even more importantly, the Coronation encouraged everyone to get a television. Not only was it the beginning of a ‘new Elizabethan age’; from that date on, our lives would be dominated by the small screen; popular culture and the mass media had arrived. Clement Attlee’s government came to power in 1945, when ideas of society dominated people’s thoughts; they wanted to know what they could do collectively to make their nation exemplary. Forty-two years later Margaret Thatcher famously announced that ‘There is no such thing as society‘. We have moved, says James, from the ‘we’ to the ‘I’, from ‘how can I make a contribution?’ to ‘how can I be famous?’ Life now, he suggests, favours ‘validation by selfie’. James wanted to track that sea-change in his books, to use social history as the context for his stories. Hilary Mantel, whom he admires hugely, writes in the present tense and has pointed out that Henry VIII didn’t know at the outset that he would have six wives, ‘he was always living in the present’; so James seeks to ‘make the past present’; his characters have to live in the now. The ‘now’ changes, of course, as the years pass. So when the series opens Britain still has the death penalty and both abortion and male homosexual acts are illegal  – Sidney’s curate Leonard must keep his sexuality hidden (in the first book, Leonard even quotes the then Archbishop of Canterbury as calling homosexuality ‘ a grievous sin’). Equal pay – or even equal access to many careers – is a long way off, and having a child out of wedlock is scandalous. Although he doesn’t mourn the passing of any of these things, James notes that people were a lot more discreet in the days before reality television, and one of Sidney’s jobs is ‘to work between what people say, what they don’t say and what they mean’. The latest book (number four), Sidney Chambers and the Forgiveness of Sins, takes us forward to 1963-66, but James stresses that it’s important not to hit people over the head with history; he is fond of a quote from the late Philip Larkin ‘Tell it slant‘; in other words, give a sense of the period, but with small details – so there are references to the World Cup and Sandy Shaw, but that’s all they are – little pointers to root the story.

Religion is, unsurprisingly, one of James’ interests; it is an indicator of how society has changed. On Sundays everyone once went to church, or thought they should (though I have to say that in my own family, even in the 1960s, it was seen as a bit of a ‘posh’ thing). Now churchgoing has been replaced by shopping, a visit to the council dump, the swapping of children between divorced parents…and a final flop on the sofa with a large glass of wine and the latest classic serial.  We have moved, James says, ‘from faith presumed to faith eroded’. He decided to make Sidney a priest not only because people would tell him things that they couldn’t tell anyone else, but also because – especially as someone who had fought in the war – Sidney would be familiar with death. James’ own father had been a soldier; he was one of the first to enter Bergen-Belsen concentration camp in 1945, and was awarded the Military Cross – ‘he was not surprised by death’.

When the much-loved Labour leader John Smith died suddenly, the Archbishop’s response was ‘Oh well’ – James saw that his father could accept Smith’s death in a way that he (and most of us born since 1945) could not. Not for nothing is the first Grantchester book called Sidney Chambers and the Shadow of Death; Sidney still has flashbacks to the terrors of the war – it has changed him. He’s a thoughtful man with his own failings, but above all he tries to help people. When Robert Runcie himself died James was at his bedside, recalling visits from ‘an escalation of clergymen…more and more purple’, starting with the hospital chaplain and ending with the Bishop of London. He realised then that the clergy were, unlike him – and indeed unlike most of us – equipped with a script, a language, a way of talking about death. In church people were made to think about death every Sunday; now they no longer have that religious vocabulary, so crime fiction perhaps provides a disguised and acceptable replacement.

Literary festivals and museums may, someone suggests, also have replaced the church as places of congregation; James agrees, ‘The search for meaning has become more dissipated, and this is not necessarily a bad thing’. He is slightly piqued, however, by the modern idea that stories are only any good if the reader can ‘relate’ to the characters, seeing this as a limiting way of looking at fiction; you shouldn’t expect to relate to a murderer.

Perhaps one of the books’ more unusual themes – and indeed another indicator that they do not deserve the ‘cosy’ label (The New York Times called The Shadow of Death ‘the cosiest of cosies’) – is Germany. The Runcies had German au pairs at a time when some people in England would not have a German in the house; the country’s history is, James says, amazing, encompassing fascism, democracy, communism, socialism and more. James’ mother Rosalind was a pianist, as is Hildegard, a German widow who features ever more largely in Sidney’s life; it was also important to James to include references to Bach, Rosalind’s favourite composer. He doesn’t go in for complex plotting; he’s more interested in moral dilemmas, the turning points in people’s lives, and the extra pressure that a bit of crime can exert – the ‘why’ rather than the ‘who’. He starts a book with a few ideas then works the story round them.

Of the television adaptations of his books, he says it’s vital that they don’t slip into the John Major vision of England – ‘long shadows on cricket grounds, warm beer and old maids cycling to Communion’; he wants to undercut all that. A problem with television is that everything is spelled out; the novelist’s task is to make the readers work, give them something to do. Personally I don’t think the first, immensely popular, series did oversimplify things (OK, I can’t keep up with Poirot either…) The second TV series is, James says, very different from the first, and perhaps a little further away from the novels.

Humour is important to him too, ‘My work is where death and comedy meet’, and he relishes the small ironies of everyday life. When he informed his father’s bank of his death, the clerk remarked that well, ‘at least he had a good day for it’. No surprises, then, that one of his many TV productions is Miss Pym’s Day Out; I know a fellow Pym-ite when I see one. He believes in humanity, in the possibility of redemption, of hating the sin and not the sinner, and all of this comes across very clearly this evening; anecdote after anecdote, each of them hilarious, each of them focusing on the little details, the ‘accidental comedy at times of tragedy’, but none of them remotely unkind or cheap. He knows everyone, from bishops to politicians, but again we want to hear more, and we want to because he’s not trying to impress us; he’s a consummate storyteller but always a generous one. You know you’d love to have him round for dinner, for his intelligent conversation yes, but also for his essential humanity.

Although he’s quintessentially English, the product of Marlborough and Trinity Hall, Cambridge (where he took a First in English and his contemporaries included Stephen Fry, Tilda Swinton and Emma Thompson) James lives partly here in Edinburgh. Despite that, he says the scariest thing he has ever done is appear at Bloody Scotland on the same platform as William McIlvanney – the day after the Independence Referendum. You get the feeling, though, that even that doyenne of Tartan Noir would have fallen for the charms of James Runcie who is, like Sidney Chambers himself, such an honourable, kind and interesting man. McIlvanney said recently that he ‘tries to shine a light into places we should all confront’; James Runcie may write of vicars in villages, but there can be as much to confront in those villages as in any Glasgwegian bar. Scotland on Sunday called The Shadow of Death ‘storytelling that probes all human frailty’; it’s all about people – what they say, what they don’t say, and what they mean.

Sidney Chambers and the Forgiveness of Sins by James Runcie is published by Bloomsbury.