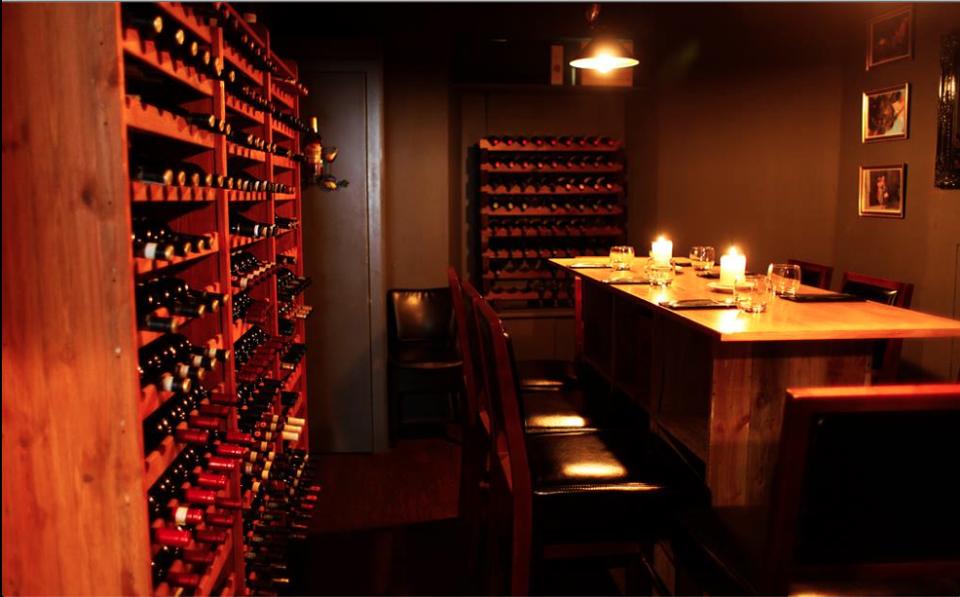 Veritas on Deanhaugh Street is as authentic an Italian restaurant you will find in Edinburgh. Located just along from the bridge and down a candlelit stair leading to the basement on the main road through Stockbridge. Walking down the stairs with all the candles made me feel very festive – it is coming round so fast this year!

The restaurant interior is really cosy and romantic with rustic style tables, lots of candles and the smell of food drifting from the kitchen. I was there for a special Tasting of Italy evening which they had organised to showcase this different dishes on the menu. Think tempura soft shell crab, crostini with sautéed liver, Neapolitan Octopus soup, fresh linguine, and homemade tiramisu (click to view the menu). We had a tasting menu featuring food and wines all selected to show off head chef Riccardo Verrecchia’s favourite dishes following Roman and Neapolitan traditions and time honoured recipes. We were seated in the private room at the back which has a huge long table and surrounded by wine bottle in racks rather like bookcases.

We had a lovely Prosecco to accompany our aperitifs which were polenta crostini with liver which was lovely, a spicy Calabrian n’duja bruschetta which was perfect with the light Prosecco, crispy fried sage leaves and a chickpea flour foccacia with gorgonzola.

The next course was a suite of seafood starters beginning with an octopus soup which I have not tried before. I was a light and tasty broth with pieces of perfectly cooked octopus that they bring in from the Mediterranean and it tasted amazing. The octopus was also used in a potato salad which was the tastiest potato salad I’ve ever had! The calamari was great – so often you get greasy undercooked chewy squid rings in this country but not at Veritas. They use the whole squid including the tentacles and cook it perfectly. Again the soft shell crab was very well cooked but the batter made it a bit greasier but the flavour of the crab more than made up for this.

Our trio of pasta was next and by this point I was starting to wonder if I could eat all the courses left on the menu. Ravioli filled with Italian sausage and aubergine was a real standout for me. I am a massive ravioli fan but this seriously impressed me – it was deeply flavoured and perfectly cooked. A hint to Riccardo’s interest in traditional Italian recipes was the Spaghetti alla Canella dating from 1800 when cinnamon was used as seasoning. The risotto al Chianti e Rosmario for me was nice and perfectly al dente, but had quite a strong flavour of the herbs rather than anything else. However everyone else finished their plates so it was probably just not to my taste.

No we are not finished yet… There are still the main courses to go! We had a small portion of rolled veal with speck served with a Roman potato croquette and caponata all of which were lovely and I really enjoyed despite being really rather stuffed by this point!

Finally we were on to dessert and I had spotted there was tiramisu and I really wanted to save space for that. The tiramisu was lovely and well balanced but the real intrigue on the menu was the ice cream. Veritas makes their own ice cream each week and our flavour was a special for that night and was inspired by Keller from the French Laundry who felt that his guest Bourdain smoked a lot so he infused his dessert with a cigar. The ice cream was creamy with an aromatic flavour and a really spicy kick – it was surprisingly delicious!

The wines we had were wonderful with the food we were served, but a stand out red was my favourite. For a fantastic Italian meal you should head to Veritas and enjoy, I will definitely be going back soon!

The menu will also feature specials for the week of homemade pasta and desserts plus if the team at Veritas can they will happily make your favourites or suggest alternatives for you to try.

They are open every evening and at the weekends. Dinner for two costs around £50 with wine.