Whether it was modesty, reticence or goodness knows what else, Edinburgh International Festival director – and respected composer – Jonathan Mills had left it until the final concert of his final Festival to programme a piece of his own. In the event, it felt like quite a statement – not only was Mills bowing out with something of his own creation, but it was a deeply serious piece with strong personal connections.

His Sandakan Threnody remembers the Second World War death marches in northern Borneo, where more than 2,000 Australian and British prisoners of war died on the 260km-long jungle tracks that they were forced to walk by the Japanese captors between Sandakan and Ranau. Mills’s father was himself incarcerated in Sandakan, and his moving oratorio was written as a tribute to his experiences there.

There was a lot of curiosity about the piece, and about the performance, and both more than lived up to any expectations. It was a solemn utterance, setting dark texts from Psalm 130 (‘De profundis clamavi’), Russian poet Anna Akhmatova and Australian writer Randolph Stow for tenor, chorus and large orchestra, slow to process, quick to erupt in seething anger, but ultimately consoling and noting resilience.

Tenor Andrew Staples carried the emotional weight of the slow-moving final movement, setting the unmistakably Australian imagery of Stow’s poem Sleep about battling a bushfire, and his impeccably detailed delivery, enunciated with ringing clarity, had just the right balance of emotion and restraint for Mills’s powerful setting. The Edinburgh Festival Chorus were hugely effective in the quietly anguished wails of the second movement, and conductor Ilan Volkov (pictured) delivered the opening movement’s monolithic evocations of ancient Japanese gagaku with tight ensemble and pinpoint precision. There were nods to Messiaen and Britten in Mills’s music, but its raw yet deeply Romantic musical imagery sounded fresh and entirely individual – and despite its intellectual rigour and profundity, it was astonishingly expressive.

From darkness to light – the concert’s second half, and the music that brought the Festival’s Usher Hall concerts to a thrilling close, was Janacek’s gloriously vivid Glagolitic Mass, a celebration of the wonders of the natural world and the composer’s seemingly unconditional love for a woman almost 40 years his junior. Volkov led a bright, colourful, somewhat brittle performance, quite driven at times (to the extent that some of the composer’s beloved speech rhythms got a little trampled in the stampede), but full of verve and brilliant detail. And the Edinburgh Festival Chorus were grippingly powerful in their all-important role, clearly relishing Janacek’s luxuriously melodic writing in a sonorous performance. It was the ideal foil to the dark seriousness of the concert’s first half, and a resoundingly positive, hopeful end to a serious-minded Festival. 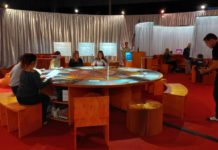