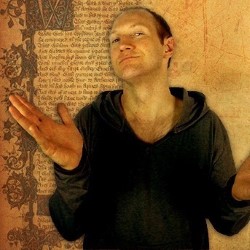 Although Canadian raconteur  rap-on-tour, Baba Brinkman, first debuted his The Canterbury Tales Remixed, Fringe 2004, we were stoutly reassured this latest show was a completely new box of delights – albeit still Chaucer, Canterbury Tales and well, yes again, performed in the Hip-hop/Rap idiom.

Promising a rousting, jousting fusion of ‘serious medieval swagger’ set to live, ambidexterous deck turntablism from composer/DJ Mr Simmonds, might we have anticipated Eminem in bed with The Wife Of Bath? Well, she married and buried five husbands so his chances could be decidedly slim and shady. Forsooth – let battle commence.

We are told that story-telling evolved around campfires beneath prehistoric African skies – and it sort of caught on: Homer, Ovid and the Petrarchan meter poet posse seriously ran and scanned with it. Potential punters in two minds need disabuse themselves that this is just a remix of the earlier show. This is a grittier, wittier, visceral and definitely  saucier, coarser Chaucer.

One of many intriguing devices in the Brinkman ‘rapertoire’ is his disarming use of off-rhyme, assonance and devil may care scandalous lyrical word-mongering. It is the beat driven rhythm that pulsates the narrative and the sheer delight in hearing him use unlicensed abandon to get the job done. And he had his work cut out because the venue is a barn of a place with a lot of stage to fill. Credit to the tech crew for a scorching sound, light and projection mix tableau.

We allowed Brinkman his claim that Chaucer was the first ever rapper as he introduces the first of five scandalous characters – after a brief taste of the original Prologue. That the Pardoner was analogous to a US televangelist crack-dealer may be open to conjecture but as events unfold we learn that greed, indeed, is the root of all evil. Sexual shenanigans in the disguise and guile of cuckoldry, betrayal, lust and jealousy provide ample and gratuitous fodder for the afternoon’s rutting narrative. The explicit sexual idioms were hardly incongruous given the prolific, mostly illicit, congress his believable characters indulge in.

DJ Mr.Simmonds’ Nun’s Priest’s Tale scratch-mix interlude was heartily received. The screen projections were reassuringly cut and passé cartoon lo-fi complimented by medieval manuscripts and illumination.  As a foil to the tedious mysogynism of some Rapper lyrics Brinkman celebrated Chaucer’s radical perspective that women are the inevitable dominate species – contemporaneously proven by some recent psycho/sociological research. You need to be there, really. The likes of Tarantino and Scorsese are referenced as is the ambivalent epistemological regarding a predatory fox’s morality. OK, you have to be there.

And for the Epilogue – ‘I’m but the empty vessel of the author/ Of the main man, Geoffrey Chaucer’. Highly recommended with perhaps a 16+ caveat to save blushes when the kids have to explain things. A veritable banquet of anachronistic anarchy – be a glutton, The Pardoner will absolve your sins – for a small consideration.