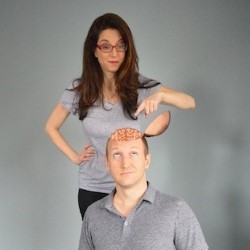 The conceit of this midday free-Fringe show was a fusion of both scripted and improvised sketches, lap-top Rap-lab experimentation and geek heaven brain-pan fried gookiness. The show’s title punningly playing on ‘off the cuff’ remarks and ‘off the top of my head’ free thought spontaneity. Married couple, neuroscientist Dr, Heather Berlin and Hip Hop rap-on-tour, Baba Brinkman, presented brain-scrambling pioneering fMRI-scan insights into a subject’s brain’s synaptic gyroscopics whilst freestyling and multi-tasking.

A touch of high IQ haiku might have been fun. We also learned that a peacock’s tail is evolutionarily analogous to a rapper’s bling – it’s a chick thing – so to speak. With our brains containing more neuronal connections than there are stars in the Milky Way Dr Berlin nails the urban myth that we only use 10% of it – it is just we are not conscious of doing so.

A few minutes of listening to Prime Minister’s Question time might prompt her to revise that claim. A charming young lad, James, ably assisted Berlin as she subjected Brinkman to some brain bandwidth, cerebral cortex multi-tasking with colours, equations, free styling and word-processing.

First guest spot was from scientist, comedian and musician, Helen Arney, who, between singing about the possibility of never-ending love assisted via cryonics, told us that in the next generation of babies we can expect to see one in three live to one hundred years old. Mitigating circumstances notwithstanding. Least of which is – who would want to?

Next on was comic, science geezer, Rob Wells, who conducted a Heath Robinson reconstruction of how the Hubble telescope can detect exo-solar planetary systems. Though the props were of decidedly Blue Peter dustbin provenance, the science was nevertheless made crystal-ball clear.

So, did we learn what’s going on “under the hood” when a comedian or musician improvises? Well, certainly that fMRI scans detect increased blood flow indicate rapid synaptic activity.

Does anything actually rhyme with Dorsolateral Prefrontal Cortex? Well, maybe, Freestylers brazenly cheat with off-rhymes and assonance, do they not? And finally – why are the spontaneous moments of life always the most memorable? They certainly were at this particular show because Rob Wells bent on one knee, proffered to Helen a modified form of carbon – an engagement ring – as asked her to be his wife. And who says science is boring?