The two black and white bears living in Corstorphine are set to become the new stars and main attractions at Edinburgh Zoo when they are viewed by the public for the first time from today.

The Giant Pandas, Tian Tian and Yang Guang, have been loaned to Edinburgh Zoo by China for a period of ten years. They arrived in Scotland on 4 December 2011 amid a great flurry of excitement, and many hopes expressed by the Royal Zoological Society of Scotland that there will be baby pandas born here before too long. The two were born in China in 2003 and since pandas are only expected to live to an average age of about 19, although RZSS tell us one has lived to 26, they are middle-aged, but apparently just about the right age for breeding.

They have now been placed in their respective dens, which are connected by a grille through which they can see each other, although we were told on Monday when we went along to see them, that Pandas actually don’t have great eyesight, so perhaps they rely on smelling each other. They are being housed behind bullet proof glass, making it difficult for the public to get any sense of what they might smell like, which is perhaps just as well. It also made it a little challenging to get any good photographs particularly in the bright winter sunshine. We had hoped perhaps for a viewing platform or somewhere without glass to allow for better quality shots, but we were restricted by the glass.

The animals appeared to have settled in well according to the Zoo staff we spoke to during our visit on Monday of this week. But The Reporter had mixed feelings on meeting the two animals for the first time. On the one hand there is all the promise of research and conservation, and even release back to the wild, but on the other is the actual sight of two large animals who ought to be living a solitary nomadic existence in the mountains of China, confined to a grassy slope in Edinburgh with bamboo thrown in now and again to keep them happy.

There is no easy solution to saving a species, and the arguments both for and against zoos are well-rehearsed, but  having been in his den for only a week, The Reporter put it to the Head of Animals that Yang Guang was already demonstrating the behaviour that one has come to expect of captive animals.

Here is our interview with one of the new panda tour guides, Christine Colquhoun, and also the Head of Animals, Darren McGarry:-

Tian Tian was a bit more timid, but came out to walk around her den and also to look through the grille for a while. They are rather smaller than we expected them to be, although one look at those claws tells you these animals are not to be meddled with.

We are told that Pandas mate in spring and give birth in autumn after a short gestation period of only five months, although the fact that there is only a small window of time (about 4 days)  during which they can mate successfully, probably leads to high odds against that happening this year.

If you wish to go and see the Pandas you have to book a time slot, and bookings have been fast and furious.

The Zoo has explained the history of how we came to have the pandas here:-

“In May 2008, RZSS signed a Memorandum of Understanding with the Wolong Panda Breeding Centre in Sichuan Province regarding the loan of a pair of giant pandas to the UK.

In May 2010 representatives of RZSS met with officials from the China Wildlife Conservation Association (CWCA) in Beijing to negotiate the details of the giant panda loan agreement.

In January 2011 an agreement is reached with the CWCA on all aspects of the ten year gifting agreement in the presence of deputy Prime Minister Nick Clegg and Chinese Vice Premier Li Keqiang.

A key element of the agreement is the contribution that the RZSS and other UK-based institutions will make to conservation research, which is urgently required to secure the future of Giant Pandas, both in captivity and in the wild.” 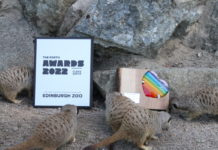