The Scottish Government yesterday took moves to strengthen the Scotland Bill and protect what it sees as a threat to the independence of the Scottish legal system.

Following the publication of an independent Review Group’s final report on the role of the UK Supreme Court in the Scottish criminal justice system last month, which is the third such report in a year, Justice Secretary Kenny MacAskill said the Scotland Bill represented an opportunity to put the High Court of Justiciary on equal footing with courts south of the border. “For centuries our High Court of Justiciary has held its rightful position at the apex of Scotland’s legal system and I want to ensure that is restored.

“Last month I welcomed the views of the independent Review Group, chaired by Lord McCluskey, and its conclusion that the UK Supreme Court has become too intrusive into Scots criminal law. I accept the Group’s recommendations to address this anomaly and uphold the historical independence of the Scottish legal system and I have today published draft provisions for the Scotland Bill to that effect.

“I agree with the Review Group that the current Scotland Bill proposals on this issue are “constitutionally inept and seriously flawed”, in fact they further entrench the problem. The Scotland Bill is an opportunity to right a wrong – implementing a certification procedure granted by the High Court for criminal cases and limiting the jurisdiction of the Supreme Court to rule solely on the interpretation of Convention rights.

“Our High Court, like its equivalents in England, Wales and Northern Ireland, is best placed to decide where there is a case of general public importance that requires the granting of a certificate. Indeed, I note that the Lord President himself has now written to the Scotland Bill Committee indicating that Scotland’s senior judges support the McCluskey recommendations, particularly on the point of certification and comparability with other UK jurisdictions. This independent endorsement of our position is very welcome.

“I now call upon the UK Government to work with us to deliver a solution through the Scotland Bill that preserves the integrity of Scots criminal law.” The Scotland Bill is a piece of UK legislation which is being debated at Westminster.

In June the First Minister asked a Review Group, chaired by Lord McCluskey, to examine the relationship between the High Court of Justiciary and the UK Supreme Court, with a view to identifying areas of concern and to advise on ways in which the mechanisms might be altered. In particular the group considered how the role of the High Court in Scotland sits in relation to an individual’s human rights.

The view expressed by the group in its final report is expressed succinctly:-“As we have already reported, there is indeed in our view some justification for allowing an appeal to the Supreme Court on the new matter of compliance with the Convention rights specified in the Human Rights Act 1998. What our proposals are designed to achieve is that the jurisdiction exercised by the Supreme Court in such cases does not go beyond what is necessary to ensure that Convention rights are defined and understood by courts in the same way throughout the United Kingdom .”

The group’s final report was published in September and recommended that the High Court should remain the final court of appeal in Scotland for criminal matters, but stipulated in addition that an appeal to the Supreme Court should be competent only where the High Court has granted a certificate that the case raises a point of law of general public importance.

Until now, ‘devolution issues’, which term means questions over whether Scottish legislation or acts of the Scottish Ministers align with EU law, have been dealt with in terms of the Scotland Act 1998, and either the Advocate General or Lord Advocate could initiate proceedings to have these questions determined. But these devolution minutes have been used in some criminal cases this year as an attempt to have earlier convictions quashed. Defendants have claimed that their human rights have been violated under the terms of the ECHR. The basis for this violation was that they had been interviewed by police without a lawyer being present. This has arisen in several high profile cases such as Nat Fraser, who was convicted of murdering his wife, but who is currently being retried at the High Court in Glasgow following a direction of the Supreme Court which meant that the conviction was quashed and a date for retrial this month was set. The founding principle for later cases was first stated in the decision in the case of Cadder v HMA.

This proposal of the review group to instigate a new procedure for dealing with devolution issues is seen by one legal commentator as a poor result for the SNP government, in that it does not entirely remove all of the UK Supreme Court’s powers in Scottish criminal cases, which the First Minister and the Justice Minister demanded earlier in the summer.

The Scotland Bill had its second reading in the House of Commons on 6 September 2011 but the date for the committee stage is yet to be announced. 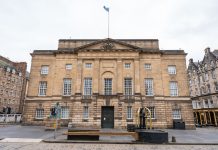