An extremely rare and valuable malt is the jewel in the crown of a collection of exclusive malt whiskies revealed on Tuesday 8 March at Edinburgh Castle, by Gordon & MacPhail. We were invited along to witness the launch, and although The Reporter is not a whisky drinker we have to say that it was a lovely drink! We were told to keep it on our tongues for a second for every year of maturation…so a minute and 10 seconds later we finally got the real flavour!

The 1940s-themed event launched six decades’ worth of whisky from the same distillery unveiled by members of the Urquhart family, owners of Gordon & MacPhail – world renowned whisky specialists established in 1895. Fiona and Richard Urquhart, members of the fourth generation of the family, wearing period dress to capture the ‘spirit’ of the era,   unveiled the new malt before an audience of whisky connoisseurs and leading industry experts.

G&M, founded in 1895, is known the world over as the custodian of some of the oldest and rarest single malts available.  Last year the company launched Mortlach 70 years old, then the world’s oldest whisky, on March 8th 2011 a follow-up product – this equally rare and aged whisky has been revealed. 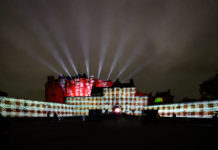