The Traverse Theatre has received three Scotsman Fringe First awards for shows in its 2010 Festival season.

The three winning plays in the opening week of awards include DC Jackson’s My Romantic History, Speechless by Linda Brogan and Polly Teale, and one of the Theatre’s off-site shows, White by Andy Manley, which is performed at Scottish Book Trust. The programme in the Traverse studio space, Traverse Two, has a focus this year on the best new writing. D C Jackson’s My Romantic History, directed by Lyndsey Turner, is already almost sold out for its festival run, and embarks on a UK tour following its World premiere at the Traverse. The show is produced by the Bush Theatre and Sheffield Theatres in association with Birmingham Repertory Theatre. Glasgow writer D C Jackson’s previous plays include Matinee Idle, Drawing Bored, The Wall and The Ducky. He is currently under commission to the Royal Court Theatre and the National Theatre of Scotland and Borderline Theatre.

Also in Traverse Two, Speechless is a new play inspired by the best-selling book The Silent Twins by Marjorie Wallace. Co-produced by Shared Experience (Jane Eyre, War and Peace) and Sherman Cymru (Deep Cut) Speechless tells the extraordinary true story of identical twins June and Jennifer Gibbons. The play was written by Linda Brogan and Polly Teale, who also directs, and will follow its hit festival run at the Traverse with a run in Cardiff. The show has also been shortlisted for an Amnesty International Freedom of Expression Award.

Over at Scottish Book Trust, Andy Manley’s beautiful play White has been delighting young audiences. The production by leading children’s theatre company Catherine Wheels is their first for very young children, and has drawn together the creative talents of Andy Manley, Ian Cameron and Shona Reppe. Gill Robertson’s acclaimed production will continue to run until August 29th. 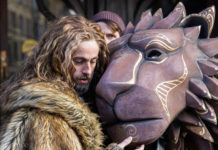