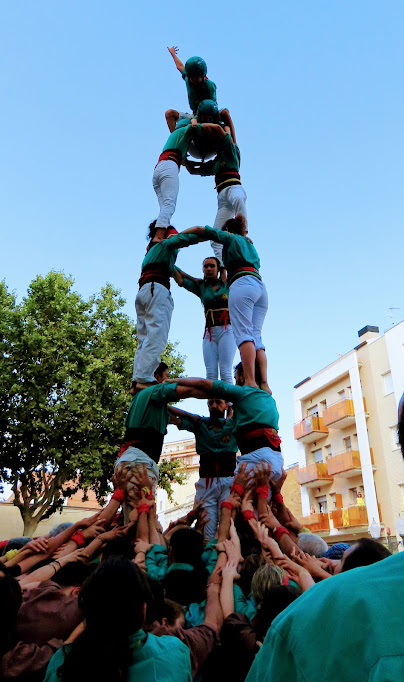 This will be the first time that the Barcelona group has travelled abroad since the pandemic.

Next Saturday 9 July around a hundred members of the Castellers de la Sagrada Família group will perform in Scotland invited by the Colla Castellera d’Edinburgh.

The Colla Castellera d’Edinburgh, founded in 2015, takes over the former Catalan Centre of Scotland and has as one of its main objectives to promote Catalan culture in Scotland.

Laia Gazpio and Xavier Sala, president and cap de colla (technical leader) respectively, promote the knowledge of Catalan culture through the celebration of Catalan holidays as Sant Jordi, Sant Joan, the National Day of Catalonia or the Castanyada (chestnut day), among others. In 2019, the Edinburgh group participated for the first time in the Diada de les Colles Internacionals (a gathering for all castellers groups from outside Catalonia) held in Copenhagen.

The green-shirted people will fly to Edinburgh on Friday, when members of the Edinburgh group will host them.

The next day at noon both colles will celebrate a human tower free event at The Mound Precinct. The Castellers de la Sagrada Familia will act as “godparents” of the Colla Castellera d’Edinburgh and to stage their testimonial baptism. After that the two groups will visit the Old Town, including Edinburgh Castle and will show how they create human towers – which are known as pilars, with just one person per level.

Castells, or human towers, are constructions between six and ten people high that were first introduced in the 18th century in an area called Camp de Tarragona. In the years since their conception they have spread throughout the whole of Catalonia.

Each human tower is the result of universal values such as teamwork, solidarity, self-improvement, the feeling of belonging and the integration of people of all ages, origins, races and social backgrounds.

It is a genuinely Catalan tradition which UNESCO declared Intangible Heritage of Humanity in 2010.

In these constructions each casteller stands on the shoulders of the one below. The height can vary from four to ten storeys.

The Sagrada Família colla was created in Barcelona on October 2002.

On the occasion of their twentieth anniversary, they will perform in Edinburgh with the only casteller group in Scotland

The Castellers de la Sagrada Família all wear a green shirt which bears a shield with an enxaneta, the child at the top of the castell, raising his hand over the Sagrada Família. It is red with a yellow background, imitating the colours of the Catalan flag.