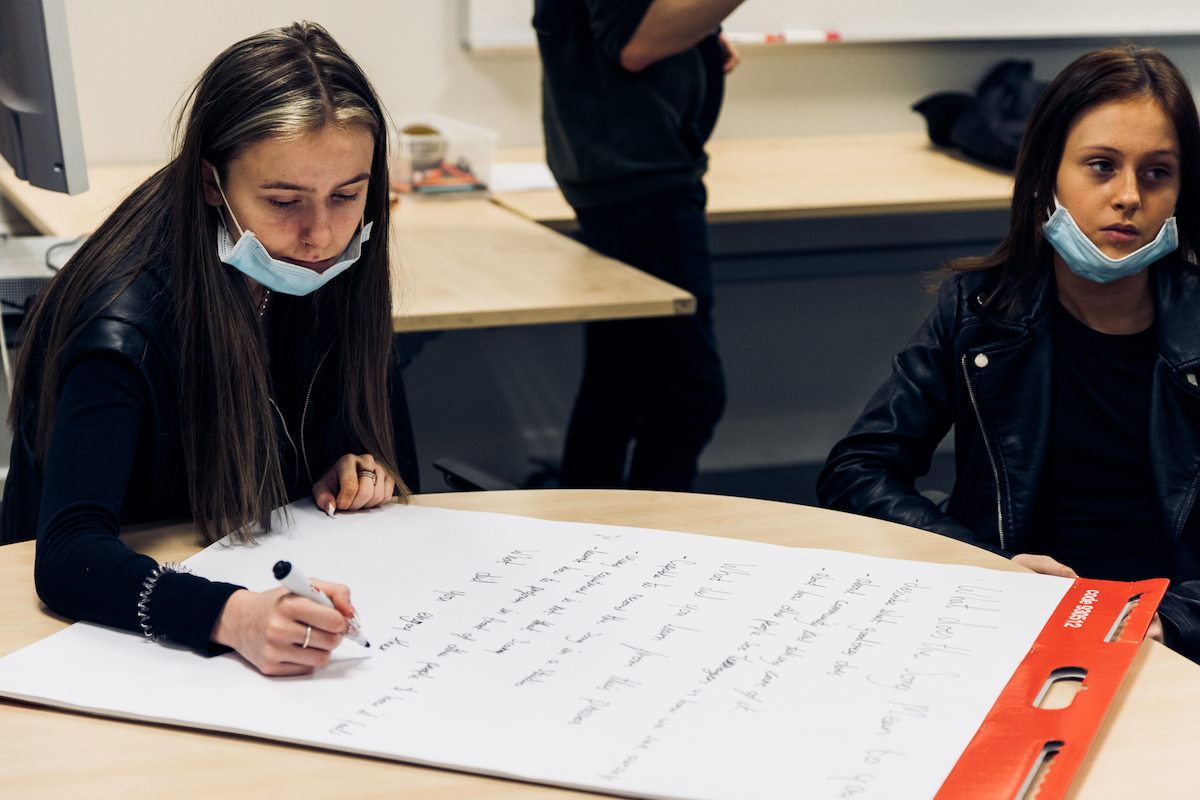 The Edinburgh International Festival created a song writing project for the young people aged between 12 and 17 from Goodtrees Neighbourhood Centre. Now the results of the Amplify project are to be released on video and audio.

Amplify offers young people the chance of expressing themselves and having a voice through music – and at the same time they develop skills in song writing and music production.

There have been ten coaching sessions with local musicians Kim Edgar, Louise McCraw and award-winning Nova Scotia the Truth who have taught the young people how to write songs and the technique needed to vocalise these – some using rap.

The young people at Goodtrees were active all the way through lockdown taking food and meals to people in their area, both elderly and families. Since then Goodtrees have worked with the Festival’s Learning and Engagement Team to connect young people, children and communities with the arts.

The young people from Goodtrees Neighbourhood Centre, which is a community focused project in Craigour and Moredun, have described the transformative impact of Amplify, and the benefits of being able to express themselves through music. By allowing young people to channel their thoughts and feelings through a creative process, the project gives them a rare opportunity to share their thoughts and opinions with a wider audience and make their voices heard beyond their community.

Amplify continues to make a real difference to the lives of the young people by giving them a forum to express their thoughts on a range of issues that impact them, such as mental health, bullying, knife crime, the often negative perceptions of young people and their desire to be heard by teachers, politicians, and parents.

Following the success of the first Amplify project, a second group of 25 young people at Goodtrees have started the song writing process, with additional support from Louis Abbot of Admiral Fallow.

Caroline Donald, Head of Learning & Engagement at Edinburgh International Festival said: “After learning about this incredible group of young people from Goodtrees Neighbourhood Centre who actively looked after their community, particularly the older residents, during lockdown, we wanted to design a project that would give something fun and creative back to them, in recognition of everything they did for other people. We were acutely aware of how much young people had been through during the pandemic and how much they had missed out on, so we wanted to create a vehicle for them to creatively explore these experiences.

“The young people are rightly proud of their recently released tracks and music video but, for me, the magic of Amplify lies not in the product, but in the process. The International Festival has made a long-term investment in this community and built up a valuable relationship with Goodtrees Neighbourhood Centre. Thanks to the success of the project, we’re now working with a second group of 25 young people who are currently writing their own songs and I look forward to continuing this journey of exploration together.”

This project is a natural extension to the work that already takes place in the centre under the guidance of John Beatson.

John Beatson, Manager at Goodtrees Neighbourhood Centre said: “The second phase of the Amplify project has been a great success. We’re so fortunate to have a strong partnership with Edinburgh International Festival, allowing us to bring such an amazing experience to local young people.

“The project has given our young people the opportunity to tell their own stories in a new and creative way. It’s been a real outlet for them, and they’ve been able to connect with their thoughts and feelings through song writing and recording.

“The music they have been working on is fantastic, with real meaning, highlighting the effects of different issues the have been facing, but also optimism for the future. We can’t wait to hear the final versions of the songs.”