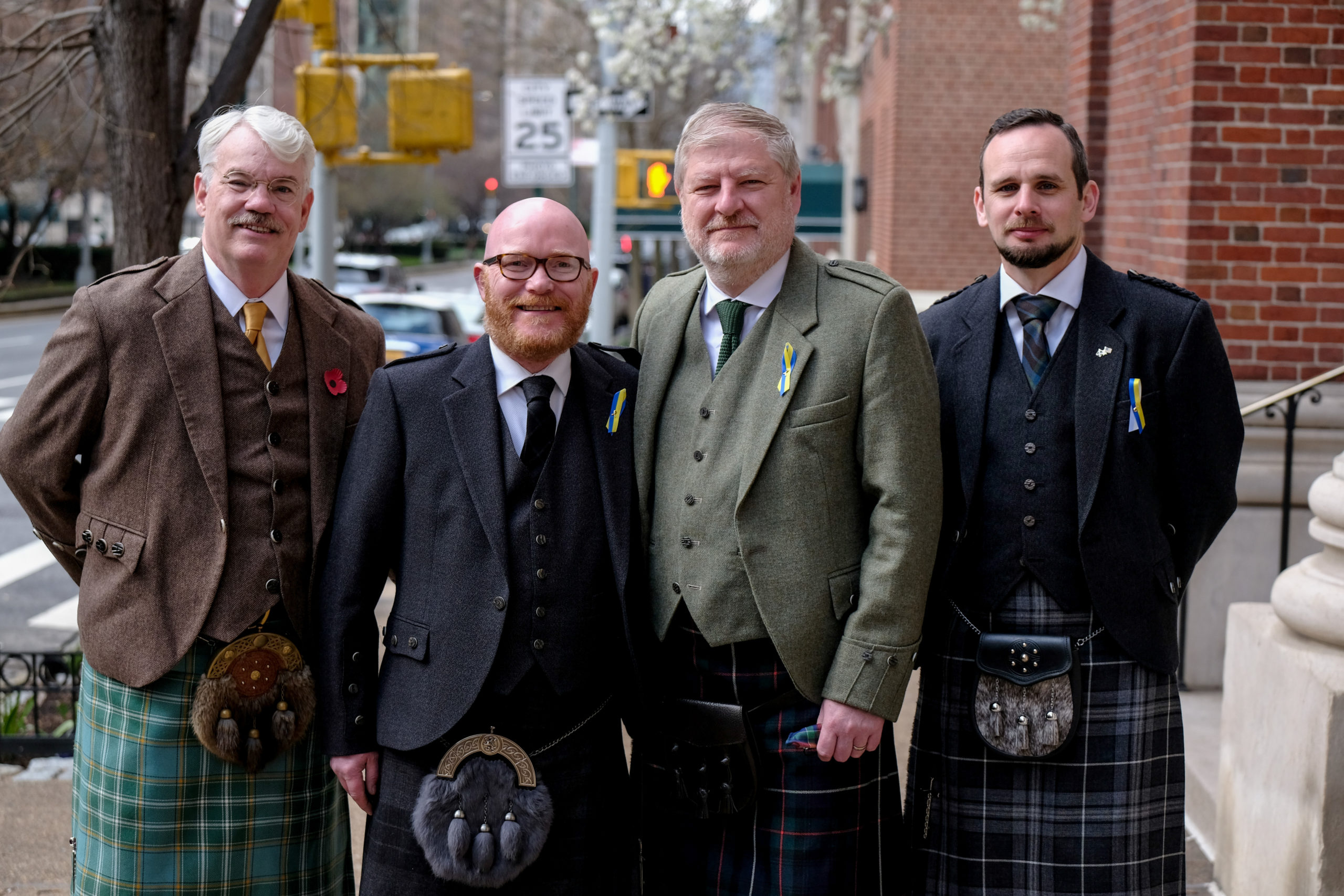 by Robert Currie, Commander of the Name and Arms of Currie.

Currie is a frequent visitor to Edinburgh, lives in New Jersey and he was unanimously elected Commander as affirmed by the Lord Lyon in 2018 at a ceremony in the capital.

Along with the support and guidance of the Scots Gaelic community, re-established the once famed literary dynasty by forming a family society in 1992. Now a “Learned Kindred” as opposed to a Highland Clan, the far-flung Curries have grown from strength to strength, now counting thousands in their membership rolls and multiple social media outlets on Facebook, YouTube, and Twitter among others.

The Society’s signature events include “Tartan Day on Ellis Island” (founded in 2002) and the award-winning “Pipes of Christmas” concerts now in its 24th year. The Society has distributed thousands of dollars in scholarships to deserving students in the US, Canada, and Scotland.

He wrote his diary of the week leading up to the New York City Tartan Day Parade for The Edinburgh Reporter – during which he was presented with an award – in the presence of Angus Robertson, Cabinet Secretary for the Constitution, External Affairs and Culture who was visiting the States.

“In 1880, my gr. grandfather David Currie published his diary of investigative travels from Montreal, Quebec to the Pacific Ocean. I guess with that sort of journaling in our family’s bardic blood, it should come as little surprise that I prepared this brief  Tartan Day journal which begins in Washington, DC and brings me to the streets of New York City and finally to America’s “Golden Door” on Ellis Island.

“I was delighted to learn earlier this year that I had been chosen to receive the US National Tartan Day Award. Awarded annually and now marking its 20th anniversary, the award recognizes accomplishment for promoting Scotland in the US.

“Still a bit in its infancy compared to longstanding observances such as St. Patrick’s Day or St. Andrew’s Day, Tartan Day began as a purely North American celebration and like most successful events, has many fathers.
Tartan Day traces its original roots to Jean Watson of Nova Scotia, Canada on March 9, 1986. April 6 was chosen to commemorate the signing of the Declaration of Arbroath in 1320; a letter delivered to the Pope and signed by many Scottish nobles asserting Scotland’s sovereignty.

“On December 19, 1991 the Federation of Scottish Clans and Societies proposed a provincial Tartan Day which was adopted by resolution in the Ontario Legislation.
While spreading across Canada, the United States picked up the baton and on March 20, 1998, US Senate Resolution 155 recognized Tartan Day – not as a national holiday but rather a day of recognition for the contributions of the Scottish people in America. This was followed by US House Resolution 41 passed on March 9, 2005. By then, Tartan Day celebrations were already being held across the US.

“Coincidentally, Tartan Day is also celebrated in Australia on July 1. This date was chosen to mark the repeal of the post-Culloden Act of Proscription which attempted to ban the wearing of the kilt and other aspects of Highland culture.”

“My wife Suzanne and I arrived Monday afternoon to attend an auspicious kick-off reception for the newly-planned Washington Tattoo. Held at the Winery at Bull Run in Manassas, Virginia, the evening boasted an A-list crowd of Washington Scots from the US military, the British Embassy and many Scottish dignitaries.
“We were treated to an impressive “mini-tattoo” featuring the Spirit of ’76 Pipe Band, the OZScot Highland Dancers (yes, direct from Australia), the George Mason University 8th Regiment Brass Band and the 22nd Battalion Grey Coats Fife & Drums Corps among others.
If this was but a taste for the fully-realized event, we are buying our tickets now.

The National Capital Tartan Day Celebration was another stellar evening featuring the Color Guard of the Saint Andrew’s Society of Washington, DC and the City of Alexandria Pipes and Drums. There was also fine fiddling from Peter Walker, a demonstration of Scottish Country Dancing and an encore of the OZScot Highland Dancers.
Guest speakers included Major General Buster Howes, OBE, CEO of the Royal Edinburgh Military Tattoo, US Congressman Don Beyer from the 8th congressional district of Virginia  and former Congressman Mike McIntyre who co-founded the Scottish Caucus in the US House of Representatives and was co-sponsor of the House Resolution recognizing Tartan Day in America.
To close the evening, I was honored to be presented with the 2022 National Tartan Day Award by Camilla Hellman and John Bellassai of the Scottish Coalition.
Commenting on the award, Bellassai said, “We were unanimous in our choice of awardee. Bob Currie has devoted more than 30 years to supporting and promoting Scottish-American culture in the USA, from developing the outstanding Tartan Week festival for the past 20 years at Ellis Island to producing the Pipes of Christmas concerts, both are now recognized as leading annual calendar events of the Scottish American diaspora. This together with Bob’s tireless work in support of the Learned Kindred of Currie and promotion of Gaelic culture makes him such an outstanding recipient.”
On a personal note, I found myself almost without words. I used the platform to recognize everyone that has helped shape Tartan Day across America. I told the assembled, “you are ALL winners of this award.” It was an incredible evening I won’t soon forget.

Our final night in Washington was marked with an exceptional Tartan Day reception at the beautiful Metropolitan Club. The evening began with welcome remarks by Stewart D. McLaurin and the Rt Hon Angus Robertson, Scottish Cabinet Secretary for Constitution, External Affairs and Culture.
Robertson very generously included a mention of my Tartan Day Award in his remarks. He said: “I want to take the time to recognize a few of those familiar faces in the room who have gone above and beyond, year on year, to help us celebrate and promote Scotland.
“For example, Bob Currie, who this year was awarded the National Tartan Day Award for his stellar contribution to the Scottish American community. I was reading in The Edinburgh Reporter – my local newspaper – when news broke of Bob’s award, that 2022 marks the 40th Anniversary of Bob’s first trip to Scotland – his commitment to keep promoting the impact of Scots in the US to this day makes him a more than worthy recipient of the award – congratulations Bob.”
The Metropolitan Club provided the perfect setting for informal networking between American and Scottish Diaspora leaders in business, industry and the arts. Refreshments were generously provided by the Distilled Spirits Council of the United States and performances included a return of the OZScot dancers and the City of Alexandria Pipes and Drums.

The morning of the Tartan Day Parade in NYC kicked off in usual style with a Kirking of the Tartans Service at Brick Presbyterian Church sponsored by the Saint Andrew’s Society of the State of New York. We were called to worship by the strains of ‘Highland Cathedral’ performed by the Mount Kisco Pipes and Drums.
Society president David M. Murphy welcomed the assembled and Readings were delivered by Chris Thompson, Scottish Affairs Counsellor, Washington, DC and Angus Robertson MSP.

The sermon was delivered by The Rev. Dr. Thomas Evans.

Following a post-service brunch, VIPs were whisked away by bus to Sixth Avenue and 44th Street – the muster location for the NY Tartan Day Parade. A lovely gathering of friends, both old and new preparing to strut our stuff up the Avenue.
Led by Scottish actress Karen Gillan, the parade featured a panoply of pipers, dancers, Scottish universities, Scottish canines and kilted crowds. I had the extreme pleasure of reuniting with my dear friend Madame Pauline Hunter, 30th Chief of Clan Hunter. Together, we represented the Standing Council of Scottish Chiefs.

The weather was fantastic, crowds cheered, waving their Saltire flags and everyone felt a bit Scottish regardless of national origin. If there was any complaint, it was that it all ended far too quickly. New York City deserves a longer parade than just ten blocks!

My Tartan Day marathon ended today at one of my favorite places – Ellis Island. The Learned Kindred of Currie began producing Tartan Day on Ellis Island twenty years ago. As in previous years, the centerpiece of the program was a newly-curated exhibition, “Scotland’s Gifts.” Past exhibitions have included ‘A Celebration of Tartan,’ ‘The Life and Legacy of John Muir,’ and ‘An Leabhar Mor – The Great Book of Gaelic’.

The program opened on March 24 and was extended until the end of April. On Sunday, April 10 we hosted a Scottish heritage day to help usher out NYC Tartan Week 2022. Our program included Gaelic singing, piping and drumming and an outstanding performance by the Shot of Scotch Highland Dancers.

Although our Ellis Island program started 20 years ago, I never get tired of watching the tourists arriving by ferry only to be welcomed by a pipe band. Sadly, I have to explain to them that this isn’t an everyday occurrence but saved exclusively for Tartan Day.

Will Ye No Come Back Again? My Journey Has Ended

And so my Tartan Day odyssey came to an end. Trust me, this only scratched the surface as there were so many more events I simply couldn’t attend. The Big Apple truly turned tartan this year with a whole host of parties, ceilidhs and receptions. So many in fact, it would be impossible to attend them all.
And that’s just here in the Northeast US. It seems everywhere in the country where two or more Scots came together, there was a Tartan Day celebration. Whether of Scottish birth or ancestry, the Scots have always made their mark on this country and always shall. 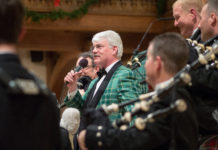