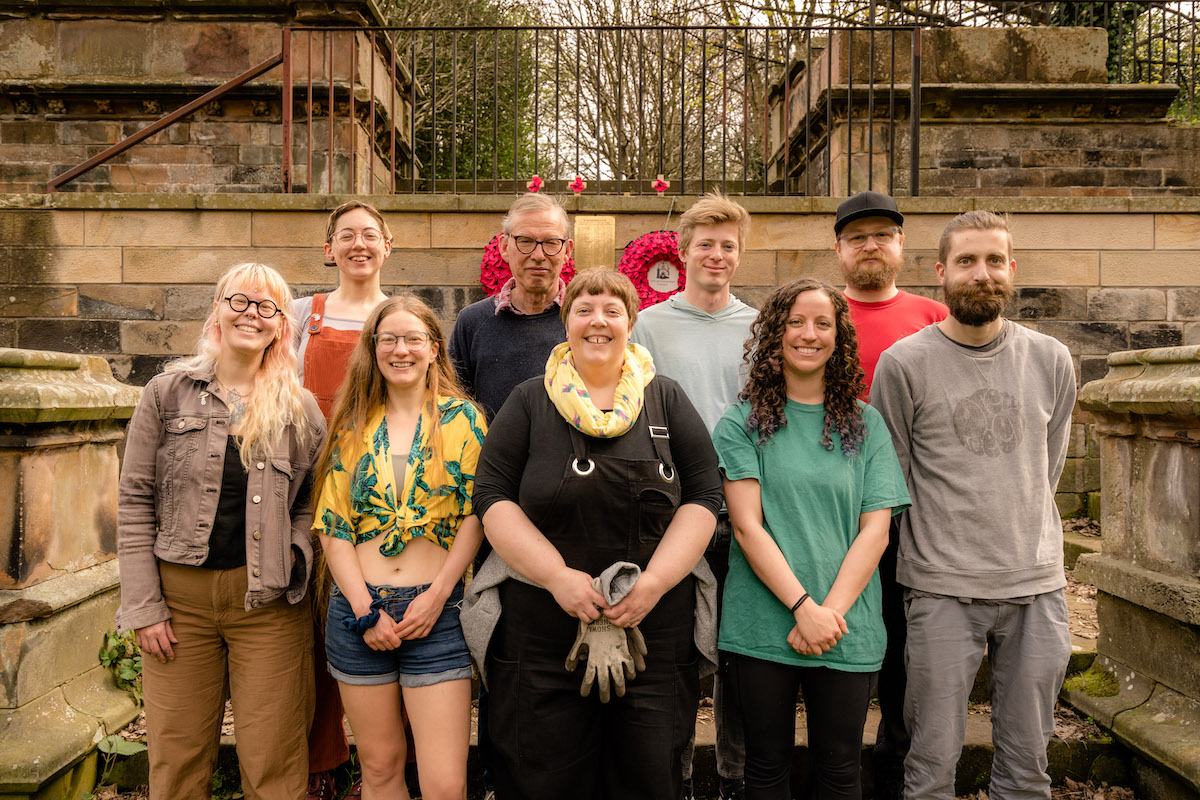 Jakob Assarsson co-founded the Friends of Dalry Cemetery during lockdown – the perfect time to explore a garden cemetery during the one hour of exercise everyone was allowed and they have made it look a lot better than it did after some years of neglect.

In early lockdown he read a post by Norbert David (the group co-founder) on the Facebook group “Gorgie-Dalry Neighbours” suggesting an organised community litter pick, and it went from there.

Now thanks to the hard work he and his fellow volunteers have done it is a thriving community space and wildlife haven. As always with a project like this there is even more to do. The Friends would like to have more help, both with the hard physical work in the cemetery and also but the historical research to establish who is actually buried there.

A “garden cemetery” is one which is established further away from the city centre and is generally larger, with more tasteful planting and so allows for a less crowded burial. It was considered more sanitary, and more peaceful.

Jakob explained: “During Victorian times there was a growing realisation that continuing to bury people in inner city churchyards was not sustainable in the long run. They were becoming too crowded, and they were too near residential buildings. Garden cemeteries just outside the city limits were the alternative.”

Dalry Cemetery was opened in 1846 as a private garden cemetery, by the Metropolitan Cemetery Association (also owners of Newington Cemetery). Originally known as Dalry Necropolis, it was designed by architect David Cousin, who also designed Warriston, Dean, Rosebank, and Newington Cemetery. At its height it hosted an average of three funerals a day and in total there are more than 27,000 people buried there.

700 monuments have been laid flat, either for safety reasons or by vandals. The first burial was Elizabeth Douglas, age 27, on July 14th 1846. Her monument was re-stood in December 2021. The most recent burial was in 2015, although an interment of ashes is imminent – the first burial activity in seven years.

Along the north wall on Gorgie Road there is a headstone to John Stevenson Rhind, a sculptor who created the Queen Victoria statue at the foot of Leith Walk and who died in 1937. Rhind also created the obelisk for the Lord Provost Sir James Steel which can be found in Dean Cemetery.

Jacob said: “I had been litter-picking in the cemetery for a few years. There was an overwhelming amount of litter making it more like a dump than a cemetery. Then I saw a post on the Gorgie/Dalry Neighbours Facebook page, organised a community litter pick and it developed from there.”

Friends of Dalry Cemetery have been active since May 2020, removing litter, planting trees, installing bird and bat boxes and bins, and making Dalry a welcoming space for the living and a respectful place to remember the dead.

Jacob continued: “We now have between five and ten regular volunteers and there are more who come along as and when they can.

“We’ve received grants from The City of Edinburgh Council Bereavement Services, Big Hearts Foundation, and abrdn. We have also raised smaller amounts via our Facebook group, Text to Donate, and membership sales.

“All of the plots are now sold, but the cemetery is still open to burials if someone has the Right to Burial document for a plot and there are spaces remaining in the plot. There have been 11 burials since the Edinburgh Cemetery Company was dissolved in 1978, ten of which were since the City of Edinburgh Council took over in 1988.”

A recent addition to the cemetery is a Little Free Library near the gate on Dundee Street, and the Friends have also created a War Memorial space where Remembrance Day events have been held. If a cemetery has fewer than 41 war graves then there is no central memorial created and there was nowhere obvious to lay wreaths and hold a remembrance service. There are 24 service people who died in the First World War and two from the Second – and Jakob confirmed that unusually they all lived locally.

The volunteers have re-stood the memorial for the first burial at Dalry and they are working on a pond. As well as having three new benches and a bin installed, they have also put up bat boxes and planted wildflowers and trees.

In the early 1880s there was not enough common ground to allow everyone who died to have a private lair, and so there were allegations of unsavoury money-making practices in Dalry. Jakob said: “Mainly they were burying more people in the same grave than they should have been doing. The only allegation which was successfully proven was that there were many shallow graves. One grave allegedly has 43 people in it, but we think that could have been a kind of code that the bodies were put somewhere else and we can’t say where they are buried. It is probably why cremations were introduced in 1885.”

The Metropolitan Cemetery Association was taken over by the Edinburgh Cemetery Company (owners of Warriston Cemetery) in 1848. The ECC ran Dalry for 130 years before being dissolved in 1978. After a decade of neglect and vandalism, Edinburgh District Council took over the cemetery in 1988 and closed it for repairs. Dalry Cemetery reopened to visitors in 1991 and since then there have only been ten burials.

At the heart of the cemetery is a pair of vaults or catacombs, intended to hold a total of 48 leaden coffins above ground at a cost of 10 guineas each: far more than the 1 ½ guinea starting price for a plot. However, this type of interment was already going out of fashion when Dalry opened, and there is no record of any persons being interred in the vaults. The Friends believe the vaults may have been used for temporary storage of coffins prior to burial.

Tidying and gardening sessions are held every Sunday from 2pm to 4pm, meeting at the central stairs. All equipment is provided and all are welcome.