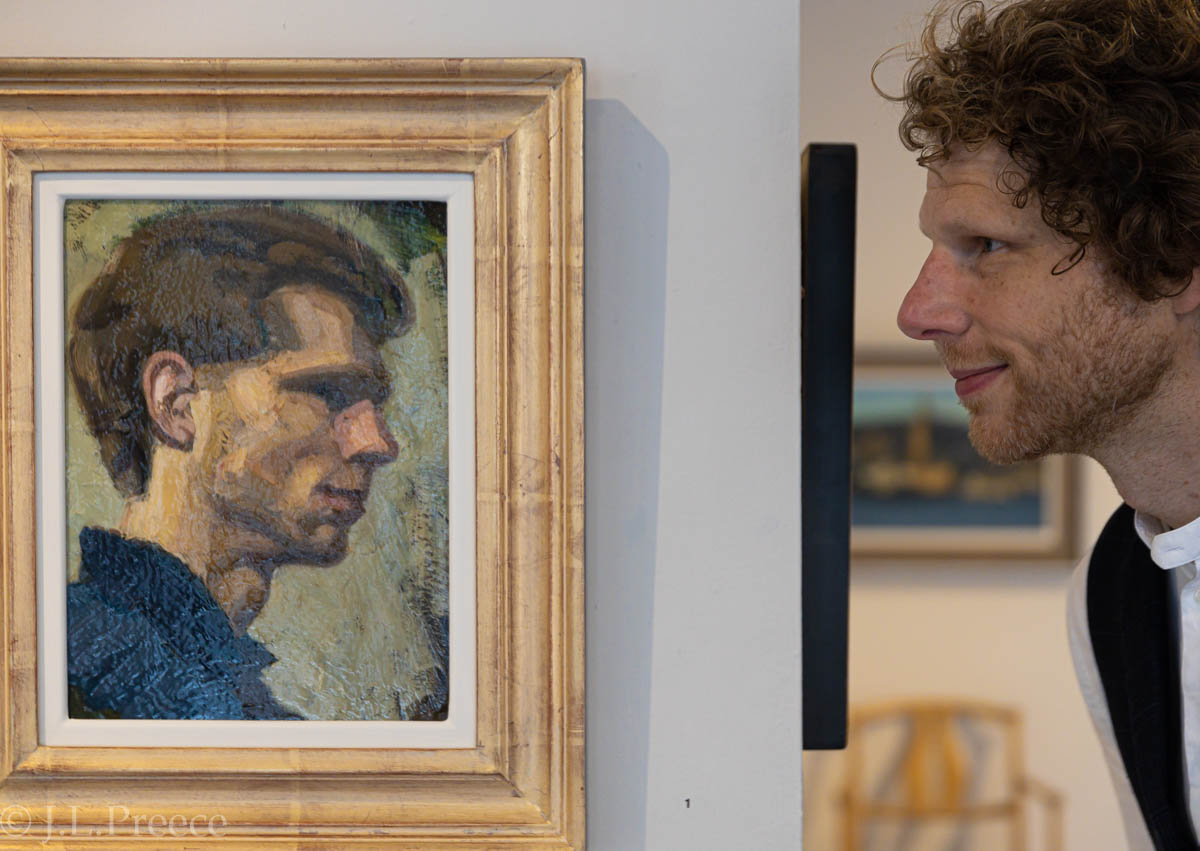 Returning to The Scottish Gallery this May with a new series of rich oil paintings will be BP Portrait Award Finalist Ewan McClure, for his second major exhibition ‘Inside and Out’. Following ‘Gravity and Light’ at the gallery in July 2019, Ewan’s newfound subjects and lockdown influences will come together in a vast collection of different themes, which showcase beautiful landscapes and his renowned atmospheric still lifes.

Included in the exhibition are scenes of Sweden, where he visits often, although the majority of the works feature the townscape and countryside of Kirkcudbright, where McClure’s practice has most recently developed as artist in residence; he has immersed himself in this harbour town that has been a wellspring of Scottish art since the 1880s.

McClure embraces this history with his studio still lined with Hornel’s work in gilt frames and his own new paintings spread out beneath, conversing across a chasm of time whilst also influenced by Charles Oppenheimer and Peploe. Despite this great kinship, McClure is his own painter, and the driving force of his practice is his own power of observation.

Although he has lived amongst the town’s cottages since 2018, it is only recently that McClure has turned his artistic attention towards his surroundings. His viewpoint is often unconventional, with paintings highlighting the industrial nature of the working harbour or drone’s eye views from the town’s famous Tolbooth. Pursuing Oppenheimer’s journey up the Old Courthouse Tower’s stone stairs, McClure finds himself lost in the coexistence of the town’s timeless appeal and its snaking lines of cars, reflecting an unavoidable feature of our era.

These landscapes reveal the personal interpretations of his lived experiences, introducing a new chapter in Kirkcudbright’s artistic history.

His turn towards landscapes, however, has done little to overtake his natural eye for still life. When within the studio, his energy is focused on informal arrangements, capturing the effect of light and shadow, with complex compositions viewed through angled mirrors that play with ideas of depth and illusion. These works allow McClure to experiment, playfully and intellectually, and offer a foil in mood and subject to his outdoor painting.

Since studying at Gray’s School of Art in the late nineties, McClure’s artistic repertoire has matured alongside his skilful handling of materials. McClure was a finalist on Sky Arts Portrait Artist of the Year and the BP Portrait Award in 2013 and was shortlisted for the prestigious Conversations Prize at the Royal Society of Portrait Painters in 2015. Inside and Out encompasses McClure’s indulgent still life works with his whitewashed landscapes coming together to reinforce one another on the wall and indicate the artist’s influences.

His skill as a draughtsman, honed over many years, and his love and knowledge of the medium means the response to his subject is intuitive, applying the paint alla prima, the brushwork sweeping, luscious and confident.