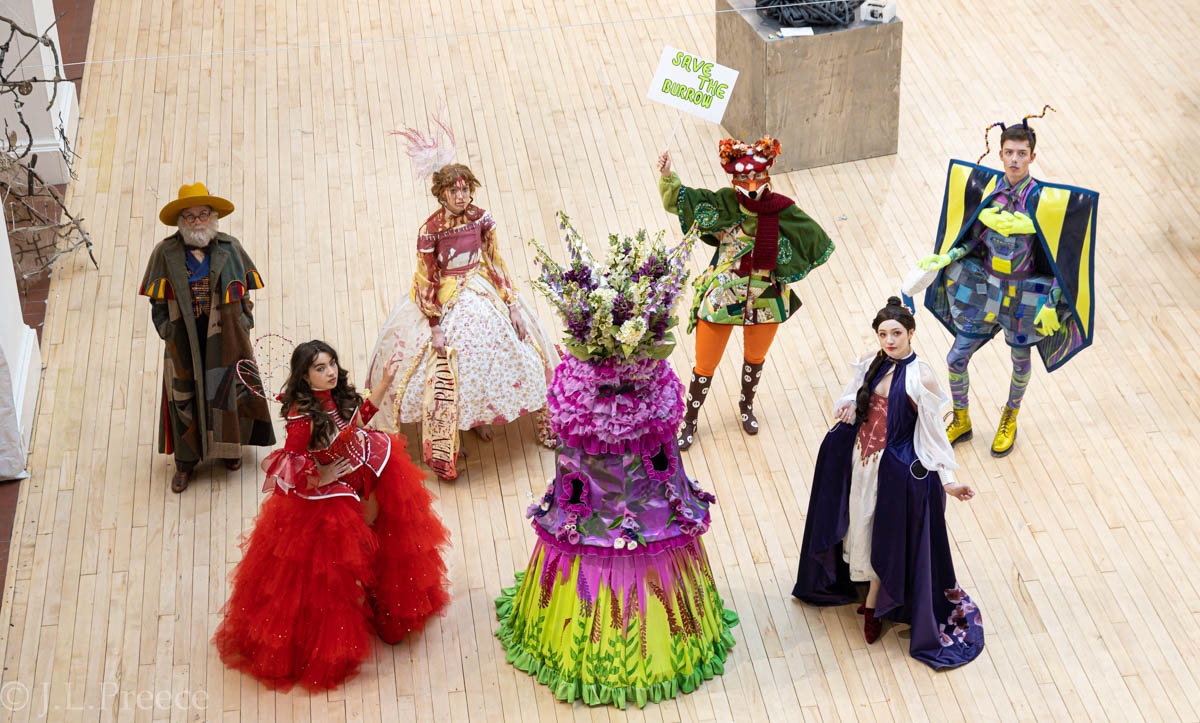 Some of the magnificent costumes from classic children’s books, The Box of Delights and a Stephen King novel were among the creations showcased by Edinburgh College of Art students.

The outfits and performers will take centre stage at an enchanting theatrical show at the Queen’s Hall, Edinburgh on 20 May, showcasing the creations of students studying Performance Costume.

The display included student Tal Beer’s interpretation of the infamous Queen of Hearts, portraying the temperamental monarch of Wonderland with a drama and vibrancy.

Caragh Veitch Philip’s creation brought the magic of Crinan Wood, one Scotland’s coastal temperate rainforests, to life through performance. Inspired by nature and Celtic ceremonial dress, Caragh’s character Flora is a giant flower monster whose costume is inspired by foxgloves.

A character from the Japanese manga series Pandora Hearts was brought to life by Carenza Dickens. In designing the vivid blue outfit she was inspired by fashion from the 1700s and use of digitally printed fabrics.

The 1970s theatre production of Roald Dahl’s Children’s book Fantastic Mr Fox was the influence for Catherine Elliot’s creation. The designs are inspired by stage costumes that used second hand curtains, rugs, pillowcases and duvets and employed textile techniques such as patchwork and rag rug.

The 1980s BBC TV series The Box of Delights, based on the classic children’s novel by John Masefield, influenced Kirsteen Lyth’s portrayal of the years of austerity post World War Two. The costumes reflected the recycling of clothing in a 1940’s style.

Ruth Main created a design for Carrie White from the Stephen King novel Carrie. The outfit takes inspiration from a 1830s inspired debutante ball with subtle nods to the 1980s. The dramatic gown is broken down to reflect the gore of the story’s climax.

Han Christian Andersen’s fairytale Thumbelina was reimagined as a stage production for Zoe Murdoch’s striking creation of the character Berkley Beetle. Zoe’s new take on the classic story wove in the theme of living in a disposable society, and textile and design choices for reducing an environmental footprint.

Previous ECA Performance Costume shows have helped launch the careers of the next generation of designers and costume makers for live, film and digital performance.

Many students have gone on to have success in the industry with careers in TV, film and stage, including Anna Robbins costume designer for the recently released Downton Abbey: A New Era.

Performance costume alumni’s names feature in the credits of a huge range of productions including The Crown, Games of Thrones, Outlander, Fantastic Beasts and Poldark, as well as stage productions for Northern Ballet, Royal Opera and the National theatre.

Megan Baker, Programme Director of Performance Costume at Edinburgh College of Art, said: “We are exceptionally proud of our students who have shown such ingenuity, resilience and commitment in creating such outstanding work. The incredible array of wonderful costumes are sure to please audiences of all ages.”

The ECA Performance Costume Show takes place on 20 May at the Queen’s Hall in Edinburgh. Tickets can be purchased via Eventbrite.