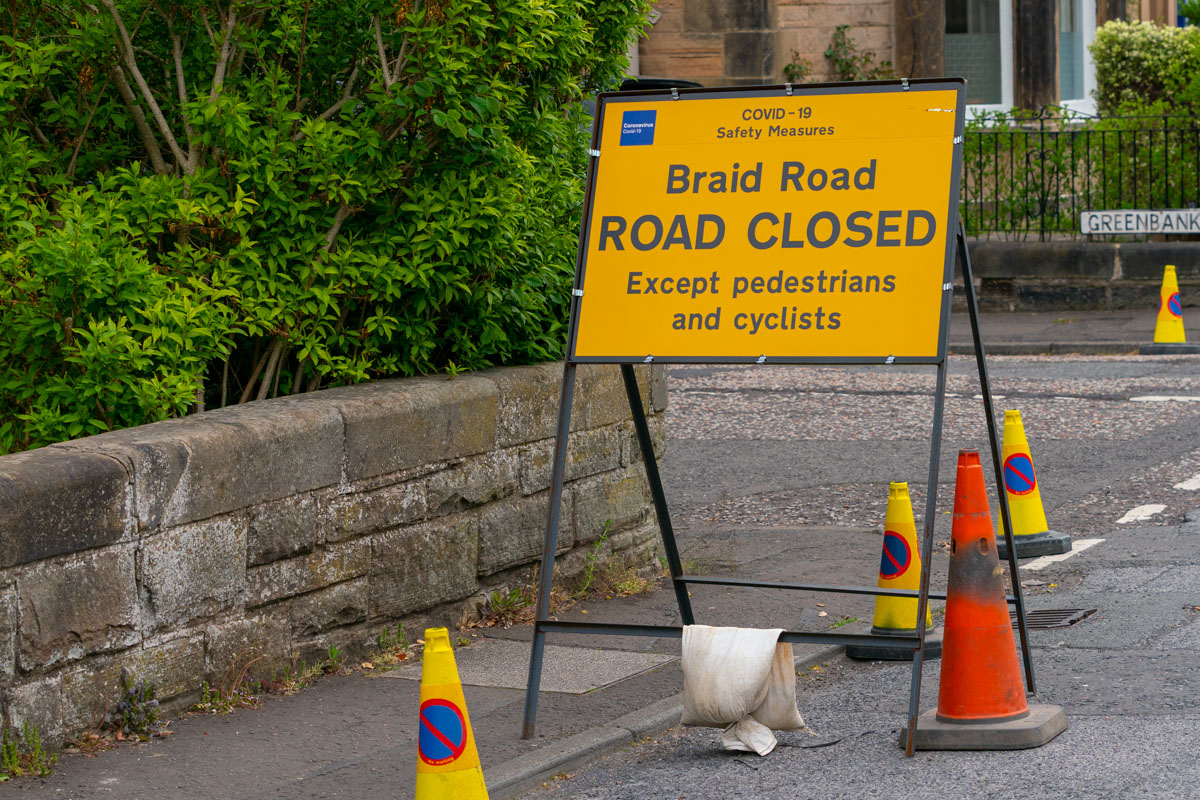 The letter below is from Paul Bailey who lives near Braid Road. He has been a vocal opponent to the closure of the road during the pandemic using Spaces for People measures – but he wrote to The Edinburgh Reporter sharing with us the letter he sent to the council recently asking for the management of signs to be improved.

Mr Bailey said: “I wrote to various councillors recently about Braid Rd where blown over signs cause confusion and other aspects are signs which are left months after work is complete.”

This is the text of the letter which he sent:

The administration seems to think it needs an 18 month Experimental Traffic Regulation Order (ETRO) before it decides on the permanent plan for Braid Rd and surrounding streets like Braid Avenue.

Considering the appalling signs which attempt to show motorists that Braid Rd is still closed northwards, the main thing the ETRO may discover is how many motorists are still confused daily because signs are either flat on their backs or unhelpful.
Let us consider the ‘temporary’ signs:
Approaching Braid Rd from the West along Braid Hills Rd, the sign at Braid Hills Approach is permanently on its back.

Mind you it was pretty useless when it was upright because it simply indicated that Braid Rd was closed, and of course it isn’t closed to the south. Therefore traffic turning right towards Morningside need a sign warning them that the road is closed at the hotel entrance.

It has often blown over and been repositioned, but it has not been windy recently and it is on its back again. The third picture shows its original position in January by the side of the road.
A little further on at Braid Farm Road there is another sign  – which is also on its back. The burst sandbags indicate another problem – mess.  There does exist a permanent sign attached to a lamp post but it is very small.

Continuing down Braid Road there’re two odd signs – first the sign advising cyclists to slow down because pedestrians might be in the road; since April 2021 pedestrians have to use the perfectly adequate pavements; the second one is a “no Left Turn” sign into Braidburn Terrace – which is ridiculous because motorists cannot travel north and it is not placed in a position for council vans to see on exiting the Hermitage and travelling north as permitted; it is visible only to cyclists who are allowed to turn left.

The actual modal filter at the old mini-roundabout is also a shambles; although traffic is allowed to travel north from the Hermitage to the modal filter, their exit is blocked by the unsightly bollards which also block cyclists coming from Morningside and trying to follow the arrows for them to turn right into Braidburn Terrace; it is similar at times for cyclists trying to access Hermitage Drive (2nd picture).   At least it’s not as unsightly as it was in February 2021 (3rd picture) before Braid Road was opened up one-way.

In Braidburn Terrace itself someone has replaced the blown-over signs which signify that the road is one way. The first picture was taken on Feb 3rd after high winds, the second on March 7th.

At the Comiston Road end of Braidburn Terrace this was the signage last March; the only way cyclists could exit the Terrace was by going into the opposite lane where cars were often turnng after the lights were on red (and cyclists got only 10 seconds to exit); they had to change the sign.

This blank sign was at Braid Crescent for a time, but it is not as silly as the one taken in August 2020.

A few months ago roadworks took place on Riselaw Road. Signs at the junction of Riselaw Crescent & Braid Road and at 4 Braid Hills Rd (near Comiston Rd) still litter the pavement months after the work was completed.

At the other end of Riselaw Crescent at the junction with Comiston Road, a “Braid Road Closed” sign has been on its back for about 6 months; nobody cares because it was another useless sign which failed to indicate whether the closure was to the north or south.

Another sign flat on its back is at the Greenbank traffic lights indicating 30 mph new speed limit.

How well are motorists are coping with so many deficient signs? When Braid Rd was opened for Southbound traffic in April 2021, Cllr Neil Ross commented on how many motorists were confused and had to do u-turns; Cllr Macinnes said that this should cease once motorists learned about the layout ; I pass by the hotel on Braid Road most days while walking the dog, and more often than not in the few minutes I am there, I witness one or two u-turns; motorists [frequently tradesmen] have not learned, but who can blame them with the awful signage? This is one of today’s victims; and when you have a trailer, turning is complicated.

It could be worse if the administration had carried out their plan to close Braid Hills Road & Drive; this sign was visible for months.

This one didn’t last long for obvious reasons.

Councillors, we need action on this shambles.