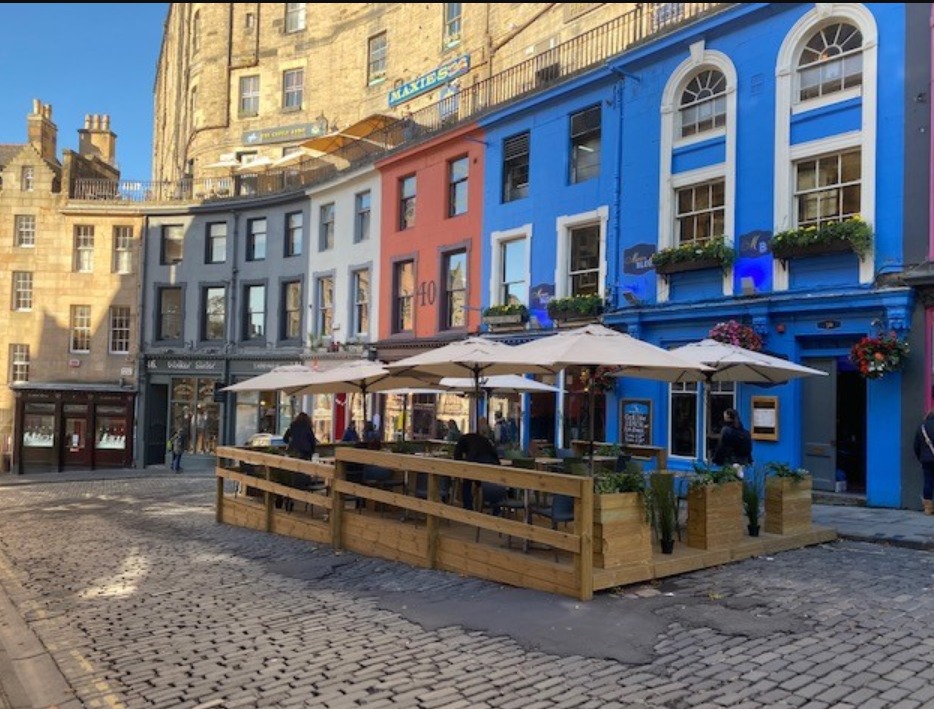 Outside seating areas built to help cafés, restaurants and bars in Edinburgh’s Old Town serve customers during the pandemic will have to be removed, councillors have ruled.

Under relaxed planning rules introduced by The Scottish Government, hospitality businesses were able to create outside seating without planning permission in response to tight Covid-19 restrictions imposed on the industry.

And in a bid to make the wooden structures that have popped up on Cockburn Street, High Street and Victoria Street permanent fixtures, ten retrospective applications were submitted to Edinburgh City Council.

The Scotsman Lounge, Clam Shell, Gordon’s Trattoria and Whiski Bar and Restaurant were among the businesses hoping to retain their external dining areas.

An eleventh application, lodged by Cafe Cockburn at 34 Cockburn Street, sought permission to create a not yet built seating area.

Furthermore, they cited concerns over road safety and the impact on Old Town residents.

The committee met on Wednesday to review the applications, which were collectively met with with hundreds of objections.

The Cockburn Association, the Edinburgh conservation organisation, strongly objected and said approval would involve the “quasi-privatisation of public urban space”.

It added: “The attempt to create a level structural platform on a busy, congested, relatively narrow, sloping street generates most impacts.

“We are not surprised that some traders wish to retain structures that are already in place and that other traders are coming forward with applications for entirely new structure.  This increases the number of covers available and with the current uncertainty of Covid and government guidance, provides a basis for continued, safe operations.”

A local resident wrote: “I object to this permanent intrusion into, and effective privatisation of a public space in our city. Other businesses still need access, the road still needs enough space to carry traffic (thank goodness or congestion would be even worse), and the associated section of pavement would become a bottleneck, challenging for the disabled particularly.”

Another called the structures “typically ugly” and built with “ill-finished timber”, adding: “They create waste that has attracted gulls and other vermin over the summer. They squeeze pedestrians onto the road and cause obstruction.

“There are so many, that delivery lorries are daily forced to park partly or wholly on the opposite pavement, obstructing it completely and damaging the paving stones.”

Councillors Alex Staniforth, Chas Booth and Hal Osler questioned whether a decision had to be made on the additional seating immediately, arguing that enforcing its removal would not be possible anyway until after next month’s Planning Committee.

The committee’s convener, Cllr Neil Gardiner, said the group was being asked to rule on whether the seating is “acceptable”, adding: “It is not.”

Cllr Osler moved an amendment in favour of continuing the application at 19 Cockburn Street to hold off on coming to a decision. However, this was defeated and the plans were refused.

Concluding, Cllr Gardiner said : “We appreciate how difficult it has been for businesses particularly the hospitality sector, during the pandemic and we’ve offered the industry a huge amount of support since last March. We have also recognised the need for people to be able to socialise in a safe way, at a very difficult time.

“This included greater flexibility in allowing businesses to provide additional outdoor structures for their customers with a relaxed approach to planning enforcement in line with Scottish Government guidance.

“The advice from government is that this should come to an end in September so we’ll be reviewing the situation regarding outdoor structures as well as the needs of the businesses at committee next month. We’ll make sure our approach going forward reflects government guidance and the public health situation at the time.”

Enforcing this decision and ensuring the businesses remove the structures from the street will be the subject of a debate at the Planning Committee on 23 February 2022.