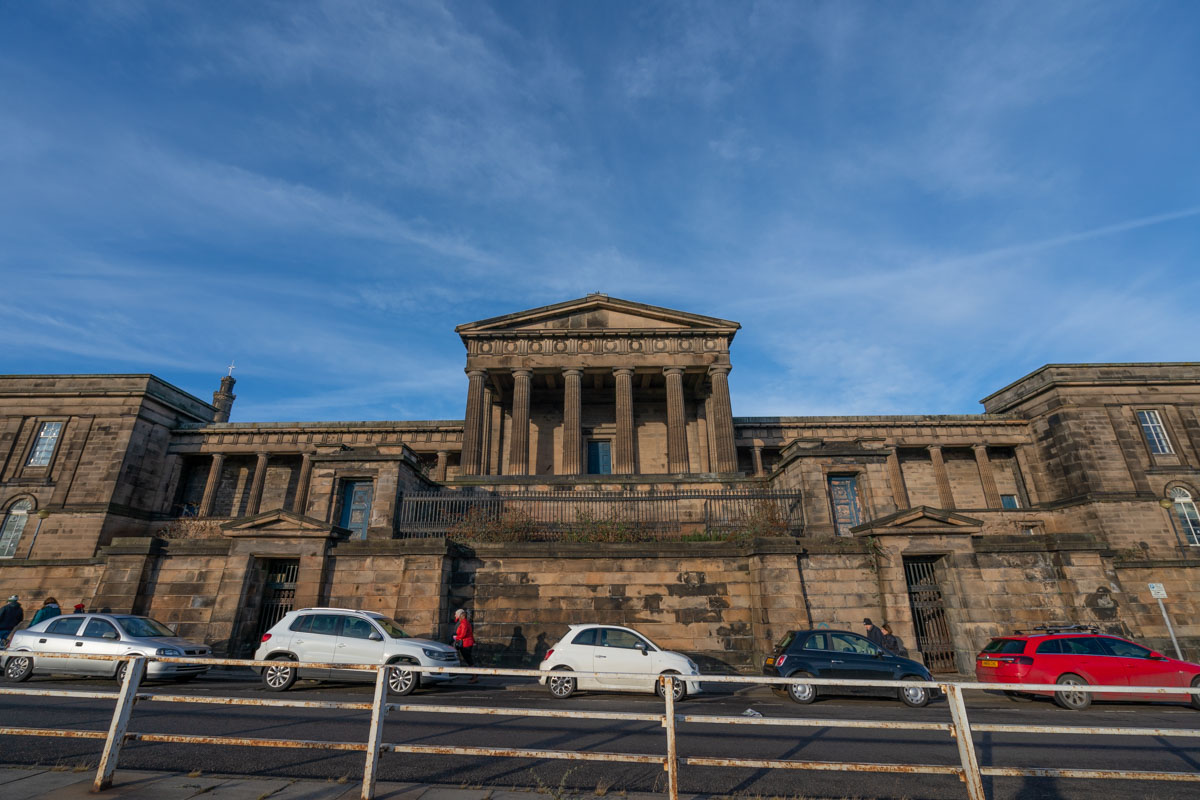 A ten day arts festival like no other will take place this summer at one of the most imposing buildings in Edinburgh which has lain empty and unused for more than half a century.

The former Royal High School will come to life with live music, visual art, dance, theatre and spoken word between 9 and 18 June 2022 when Hidden Door hold this year’s pop up festival there. The chamber, which is one of the most central rooms, will become a space for dance on an elevated stage, and outside there will be bars on the front terrace enjoying fabulous views over Holyrood, and an outdoor stage will also be built in the car park.

The Edinburgh Reporter was shown around the empty building which had been considered at the end of the last century as the possible home for the new Scottish Parliament, but none of those plans came to fruition. The school moved to Davidson’s Mains in the 1960s.

The building is made up of interlinking rooms, staircases and corridors which will be filled with art for a last hurrah before it is developed as an education centre for the musicians of the future.

At the front of the building there is a door through which school pupils were led out when leaving school. There they would stand on the south facing platform which offers a grand vista over Holyrood and up to Salisbury Crags. Now festival goers can explore the building and the whole area around it before it becomes a building site..

Later this year work will begin to transform the building into the National Centre for Music. There have been lengthy planning wrangles over the option to create a luxury hotel on the site which was finally dismissed last year in favour of a plan to create a music school.

David Martin, Creative Director of Hidden Door, said: “It’s not that hard to find as a building which is pretty prominent in the city centre, perched on the side of Calton Hill. We had always clocked it – at Hidden Door there’s a group of us who are always aware of buildings in the city which are conspicuously dark, so when we built up a relationship with the council we started talking about the Royal High School and the possibiity. We were amazed at how open the council were to Hidden Door coming in and doing our thing in the building.

“What we are really trying to do is shine a light on what we call the best new emerging talent in visual art, music, dance, theatre, spoken word in Scotland.

“And one of the ideas is that if we bring that together then audiences get a chance people to pick and mix between different art forms that they might not necessarily go out of their way to see. So people can create their own experiences where they get to see visual art, go and see a music show, sit in on a spoken word performance that they might not normally go and look at. But above and beyond all of that we are also for this particular edition of Hidden Door we are commissioning collaborations where we are asking artists and musicians set designers and costume collectives to work together to create some specially commissioned performances for the building.

“The building has some quite remarkable spaces inside and we wanted to commission some performances which will suit those spaces.

“There are over 100 doors and we are opening some doors and gates which have not been opened for more than 50 years. That involves a lot of rust, a bit of blacksmith work and some careful conservation work, but we are really excited to be able to open up the original school gates and the audience will be able to find their way in just like the pupils did back in the 1960s.”

Events like this involve an amount of fundraising and in the case of a pop up festival like Hidden Door that means it is back to the drawing board each time.

David said: “With Hidden Door we have always wanted to be as independent as possible. We generate all our own funding through ticket sales, bar sales, grants and funding. We make that money each year and the best way people can support Hidden Door is to come along, buy tickets and buy a pint and get their friends to do the same. That is supporting Hidden Door.”

Hidden Door are working in partnership with the organisations who are involved with the development of the site into the new National Centre for Music. Last October, permission was granted for the restoration of the building into a centre for music education and performance.

One of those organisations is St Mary’s Music School which was behind the planning application to turn the building into a seat of music education.

Headteacher Kenneth Taylor said: “It is great to be involved in this celebration of the breadth and diversity of artistic and creative practice alive in Scotland, and a real opportunity for our young musicians to share their contribution to this vibrant and engaging scene.

“The setting of the Old Royal High School is a perfect canvas for the imagination – opening doors to memories of its past and excitement about its future – especially as it will become the home for our pupils.”

St Mary’s Music School currently has its base in the West End for 81 pupils and around 150 Friday and Saturday pupils. Entry is by audition and is based on musical ability and potential. The Royal High School Preservation Trust was set up in 2015 to restore the former Royal High and create a world class centre for music so that pupils from St Mary’s could move there. The planned restoration is backed by a donation of £55 million from philanthropist Carol Colburn Grigor who is one of the trustees and the Dunard Fund.This sum will cover the capital cost and support future maintenance of the building. The plans are to create a school alongside a café, gallery and visitor centre set in publicly accessible gardens.

Hidden Door is opening the whole site to the public from 9 to 18 June 2022, and the full programme will be launched in February. Some indoor events will take place after 10pm but outdoors any performances will end at 10pm so that there is as little disturbance as possible to any near neighbours. Hidden Door were planning a leaflet drop in the area over the weekend to appraise neighbours of their plans.

Tickets are available via hiddendoorarts.org/tickets or from Citizen Ticket.

The team behind Hidden Door have opened many buildings and sites in Edinburgh which have otherwise been out of bounds or disused for some time. One of these was the Granton Gasometer last year, where the festival was largely staged outside and was immensely successful.

The pop up event began at Market Street Vaults which are now a parade of shops and restaurants. In 2015 the event took over a space at King’s Stables Road where the buildings have now been converted into StayCity Aparthotel.

In 2018 the festival used Leith Theatre again along with State Cinema nearby, and this was followed by a farewell weekend event in 2019.

In 2020 there were many events held online and the latest incarnation was the five day outdoor event in September at the gasometer which will be developed into housing and a new town centre in the next decade.