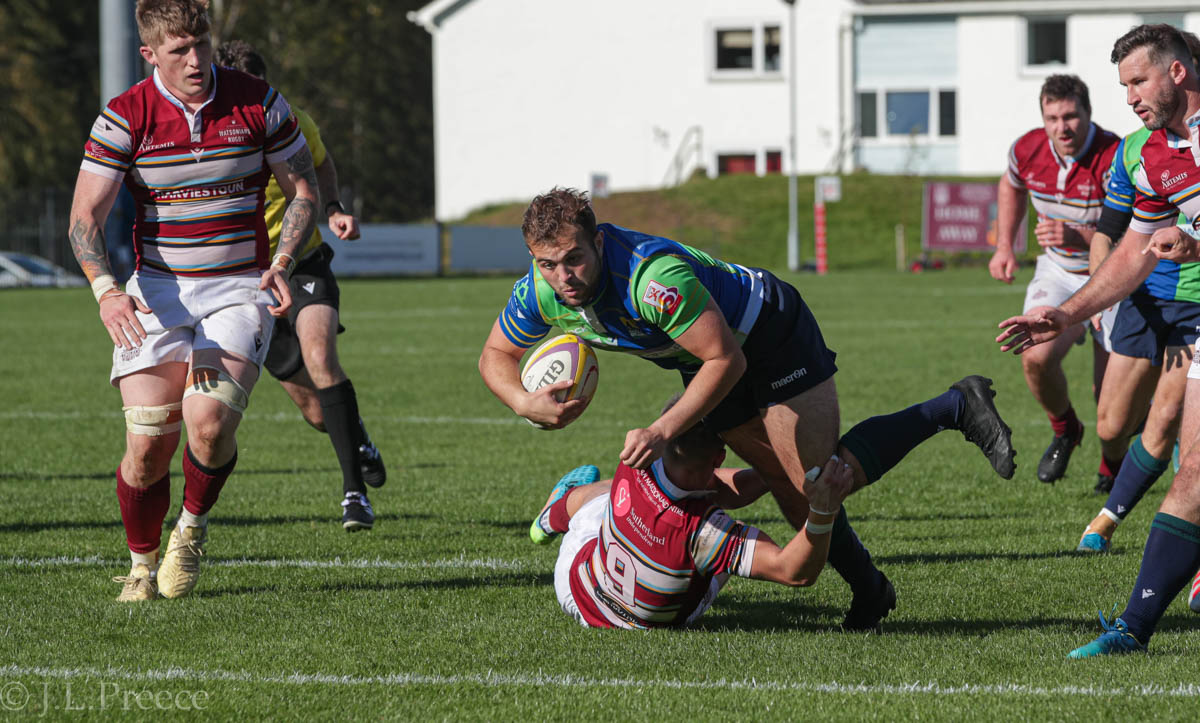 Boroughmuir Bears made the epic, 1.1Km trip round the corner to Myreside to face a Watsonians side who have, latterly, struggled to record a win. They’ve suffered few narrow defeats, so a slew of bonus points, but the four, or five, points for a win is what, essentially, carries teams up the FOSROC Super6 table.

With the stiff breeze whistling across the Myreside pitch, Watsonians kicked off into that ‘breeze’, hoping that a wind-assisted half for the visitors could be kept largely in check.

Rather than use their advantage, the bears choose to run the ball out, before kicking clear. Watsonians won the resultant lineout and were straight onto the offensive, pushing the visitors back into their 22.

A well-worked move saw play up to within a few metres of the visitors’ line before the match was pulled back from a penalty advantage to the home side. Stand off, Joe Reynolds stepped up and slotted home the kick for a 3-0 lead after three minutes.

Predictably, the restart went for miles and, with the ball swirling about, Watsonians had to scramble clear before kicking. Unfortunately, the ball had been booted straight out from from a pass back into the 22, puting the pressure on the home line.

‘Muir won their lineout and a smart passing move across the front of the try line ended with the Bears’ Kaleem Baretto going over under the posts, Martin Cimprich converting for 3-7 after five minutes.

In a, virtual, repeat of the first few minutes, the game came back to the away end for a time before Boroughmuir used the wind advantage and drove the game deep into ‘Sonians 22 where they set up camp. However, despite their best efforts, they lost the ball off the back of a ruck and the game then worked its way back to the other end.

The home side then set up a maul from a lineout and held the ball in, before scrum half, Roan Frostwick, fired the ball out to his back division. And that is where it all went wrong, the next pass across went awry and, as the ball bounced about, Cimprich was on it and sprinting clear for the 70-odd metre gallop to the other end and try number two. He then converted for 3-14 on the 15th minute mark.

Despite the windy conditions, the next 10 minutes were played mostly between the 22’s, but Watsonians were the first to threaten the line. However, although they crossed the line, the ball was ‘held up’ resulting in a goal-line drop-out.

‘Sonians were then straight back into the ‘Muir 22, setting up with the pack who tried a few pick-and-goes before the ball came out to hooker, Ross Graham who, with the help a friend or two, crashed over under the sticks for a try.
Reynolds then knocked the ball over for 10-14 with 15 minutes left on the clock.

The game, once again, went end-to end with neither team dominating, but both having chances. Boroughmuir’s first ‘chance’ came the way of a missed penalty, but on 35 minutes a series of scrums on the home line saw a penalty try awarded to the visitors and a yellow card awarded to Watsonians’ Luis Ball. So, at 35 minutes played, it was now 10-21.

Just before the break, the home side had another try chalked off when, following a period of sustained attacking, centre Lewis Berg, broke through defence and dived over in the corner, Unfortunately for him, his opposing centre, Robbie McCallum’s last-ditch tackle saw Berg’s feet across the touchline prior to grounding. No try, so the half finished 10-21.

Straight from the restart, Watsonians were on it and, with the wind now at their backs, progress was made up the pitch. Then reward was had when, seven minutes in, with the Bears struggling the clear their lines, Campbell Wilson smashed through for a, second, home try. Reynolds then converted for a, much healthier, 17-21 score line on 48 minutes.

The next 10-12 minutes mostly belonged to the Meggetland side as they attacked from all points, pressing the home defence deeper and at one point drawing a five-metre scrum from the match.

As the match entered the final quarter, Boroughmuir managed to extend their lead when they created a huge hole in the defence, allowing McCallum to dodge and weave his way to the line. Try scored, then converted by Cimprich, their lead stretched out to 17-28.

Four minutes alter, having weathered a brief storm, the visitors scored their fifth try of the match. This one was another dodge-and-weave effort, this time by Baretto, for 17-33, which went out to 17-35 following Cimprich’s conversion.

It wasn’t until the final couple of minutes that Watsonians came back into the game with two tries in quick succession. Boroughmuir might have lifted their foot of the gas a touch early, but, first, a converted try on 78 minutes by the Wilson-Reynolds combination and then another, unconverted, try from Reynolds in the right corner left the final score at 29-35.

This final flurry of scoring helped Watsonians pile on the points to ensure that they lifted the Allan McNish Memorial Trophy with an aggregate 65-48 score, having beaten the opposition 36-13 back in August.