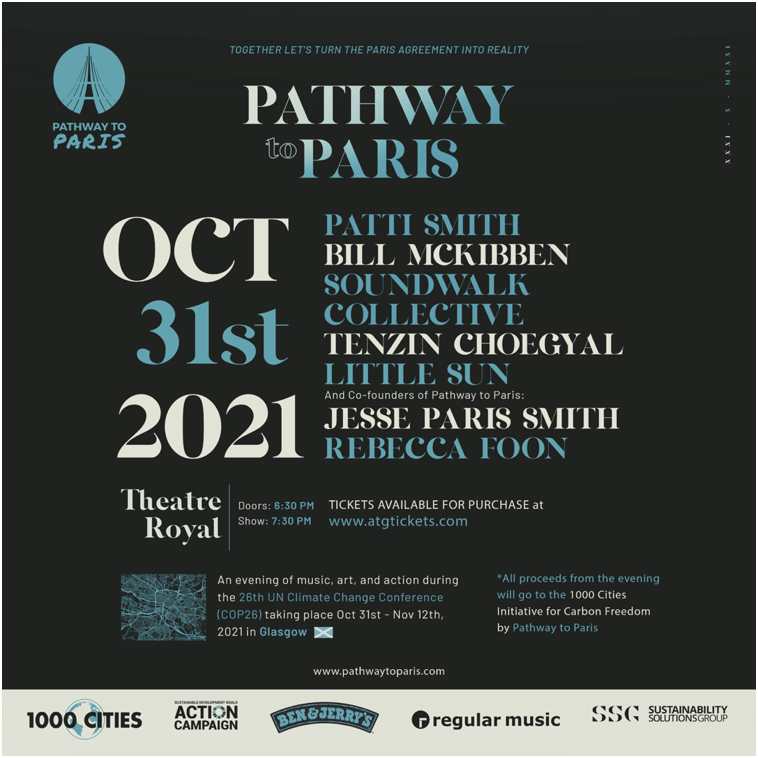 Pathway to Paris in collaboration with Regular Music announced a special concert on 31 October at the Theatre Royal in Glasgow.

This concert will help to open the United Nations Climate Change Conference which takes place from 31 October to 12 November 2021. The evening will focus on the importance for nations to push for, achieve, and go beyond the climate targets highlighted in the Paris Agreement, and for cities to lead the way.

Bringing together leading musicians, artists, thinkers, and policymakers, the event will serve as a call to action, urging the international community to ramp up ambition towards a climate safe future for all.

The first Pathway to Paris concert took place in Paris in 2015, and coincided with the adoption of the Paris Agreement. In 2017 at the United Nations Secretariat, Pathway to Paris announced their 1000 Cities initiative for Carbon Freedom. The initiative invites all cities of the world to transition away from fossil fuels and move to 100% renewable energy as soon as possible in order to turn the Paris Agreement into reality.

Co-Founder of Pathway to Paris, Jesse Paris Smith, said: “In the world of music, the best way to improve is through collaboration. This is the same with the critical issue of climate change. We must join together to make this the most ambitious collaboration of our century. We will not be able to implement crucial and challenging solutions to climate change, and all urgent environmental problems as long as we stand divided. Inseparable from the issue of climate change is the need for world peace, global communication, and an international collaboration unmatched by any event in human history.”

Co-Founder of Pathway to Paris, Rebecca Foon said: “These meetings mark a critical moment in history, as we collectively need to come together to massively ramp up our targets and actions. Cities play a critical role in transforming our world out of the era of fossil fuels and into a renewable world. This is our time to make this shift and transform our nations and cities to become sustainable and resilient for us all and future generations. This is our chance as our window of time is drastically narrowing.”

The concert will feature Patti Smith, Tenzin Choegyal, Soundwalk Collective in collaboration with Patti Smith and Jesse Paris Smith to perform CRISIS OF THE LOST, a sound piece composed of underwater recordings deriving from the TBA21–Academy sound archive. This resource documents the voice of ocean life in contrast with the destructive impact of manmade acoustic pollution over all species of marine life.

The live performance is accompanied by visualisations by Territorial Agency to provide insights into the scale and mechanics of the ecological threat that is sound pollution in the ocean. The piece features additional recordings carried out by sound artist Jana Winderen during field trips in Belize, Panama, Dominican Republic, Norway and Iceland as well as recorded detonations of the seismic airgun blasting acquired from Simone Baumann Pickering’s lab at Scripps Institute for Oceanography, and cello written and performed by Lucy Railton.

CRISIS OF THE LOST is part of a collaborative body of work and series of album projects between Patti Smith and Soundwalk Collective, entitled CORRESPONDENCES, due for publication and release in Spring 2022.

Pathway to Paris Founders Jesse Paris Smith and Rebecca Foon will also be performing throughout the evening. Speakers include 350.org’s Bill McKibben and other special guests to be announced soon.

All proceeds from this evening will be donated to Pathway to Paris’ 1000 Cities Initiative for Carbon Freedom.

Pathway to Paris was founded in September 2014 by Jesse Paris Smith and Rebecca Foon, with an intimate evening of music and speakers at Le Poisson Rouge immediately following the People’s Climate March in New York City. A series of similar events unfolded in North America over the ensuing years. The events were initially intended to build awareness to help establish a global climate agreement, leading up to the UN Climate Change Conference (Cop21) that took place in December 2015, and culminated with two major concerts in Paris at Le Trianon, the first weekend of the conference. In November 2017, Pathway to Paris launched the 1000 Cities Initiative at Carnegie Hall in the lead up to COP 23.