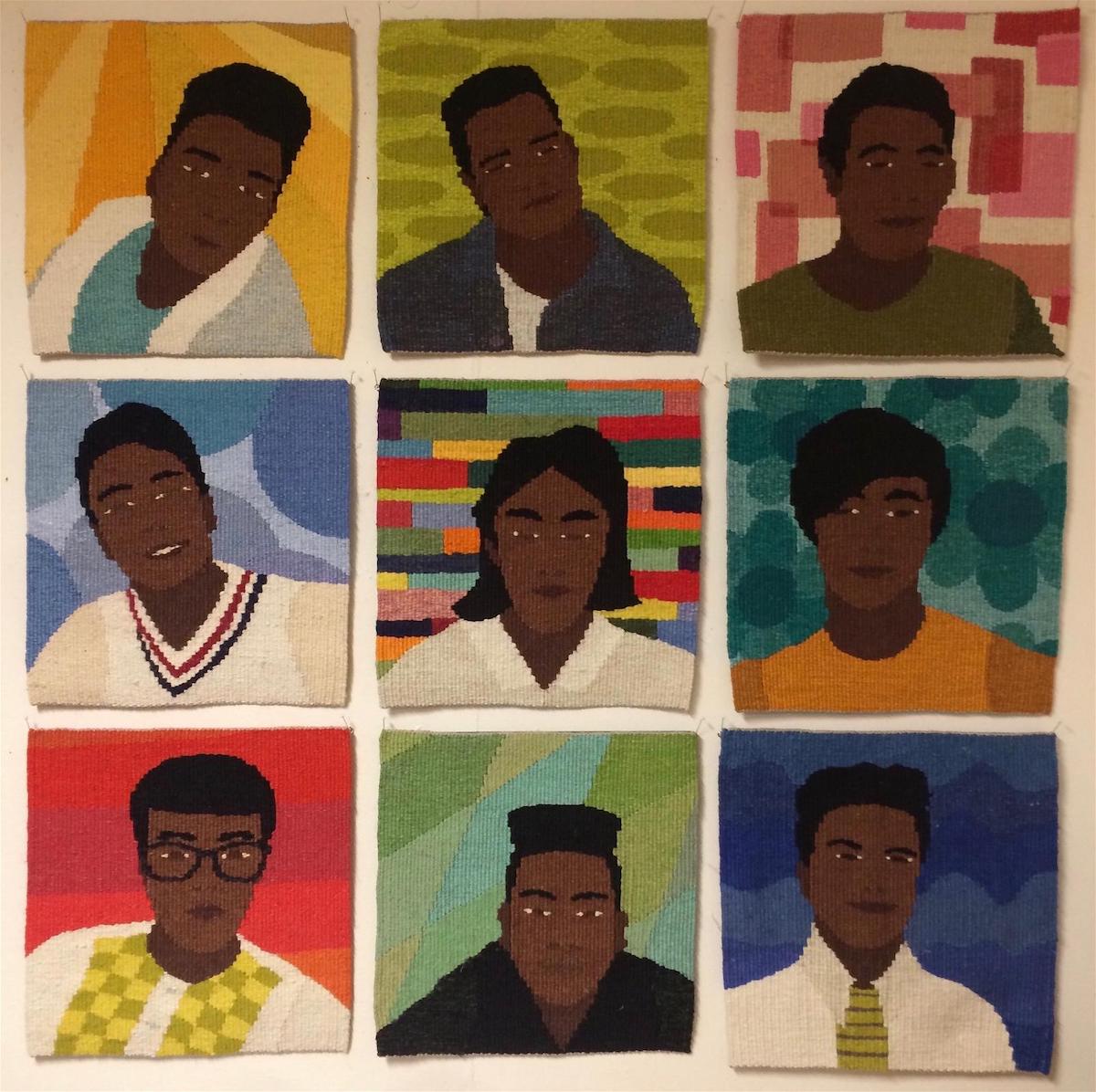 The Cordis Prize founded by Miranda Harvey and Ian Rankin has announced the shortlist of artists considered for the 2021 price.

There are 20 artworks by 18 artists considered for the £8,000 prize which will be exhibited at Inverleith House Gallery from 23 October to 12 December.

Entries from Australia and Russia are included on the list with other renowned weavers from Japan, Iceland, Norway, Denmark and the UK. Some use traditional methods and fibres and others use found materials and unorthodox applications of the “Gobelin technique”.

The prize captures a snapshot of how this art form is developed today, and the works include those using second hand books, recycled plastic and cotton linen with wire. The message is a spotlight shone on social issues such as the refugee crisis, resistance to ethnic diversity and lockdown loneliness.

Speaking on behalf of the judging panel following the rigorous selection process Cordis Prize founder Miranda Harvey said: “This year, after a postponed deadline, we received a record high number of submissions from artists across the world. We were heartened to see an upturn in the number of young weavers, and in artists moving from different disciplines towards weaving as a medium for creating fine art.

“The pandemic year has certainly exerted influence on the artists who submitted their work, through political critique, personal reflection, and in finding tapestry as a means of therapeutic making. The 2021 Cordis Prize boasts the most eclectic mix of artists, themes, and techniques to date, and we are pleased to present a broad reflection of the world of tapestry through our shortlist exhibition.”

The 2021 Cordis Prize shortlist is:

“Cloth Body is a woven sculptural response to absence and hope. It brings together – through cutting, knotting and weaving – a collection of longed for bodies made absent by physical distancing. Four pairs of jeans, three dresses, two sets of pyjamas, six sweatshirts, three skirts, five pairs of leggings, eight pairs of pants and ninety-six t-shirts shared by friends and family – and others unknown to me – otherwise destined for the rag pile. Closely knitted garments cut adrift by a rotary blade and reassembled here through knotting and weaving.”

“I use light as a tool to transform the textile from definite handmade craft into ambiguous space. By letting the tapestries cast a shadow, by doubling, reflecting, distorting and repeating the work, it becomes more a question of an actual evocation of the textile and the many different views contained in an image than a traditional artistic practise. I am preoccupied with the simple expression as a poetic force.”

“The Socks Of A Companion That Encourages Me To Notice is a sculptural tapestry; socks for the table to somehow provide a more expansive and more complacent experience of the world. To think about what can be learnt from the things that exist around us, what they can tell and what they can teach. To re-discover and playfully reconfigure the ways in which we think about the modern world.”

Anna Olsson (Sweden) To Me You Are Valuable

“I received these selfies from young people I know who have been denied asylum in Sweden. Some of them now live hidden in Sweden, some have moved on to other countries and some have been granted a residence permit at a new trial.

It all started when I could not attend a demonstration and I asked someone to take pictures for me. I got, of course, a selfie sent to me. I decided to weave it as a documentation of the struggle, an ordinary selfie of an ordinary teenager in the middle of a fight for his right to asylum. When I start weaving the picture, an ordinary guy is still an ordinary guy, but now with a piece of paper that says he cannot be in Sweden. The Swedish Migration Agency says that he is not desirable here, not worth a life in safety. I say instead, you are so valuable that I portray you in a tapestry.”

“There is a closeness that we have not been able to give each other because of the pandemic. A closeness that is barely noticeable, but which is such an important bond between us; a pat on the shoulder, holding open a door, a quick selfie or a high five. Sometimes we talk to each other through the proximity of our hands and I understand the world through my loom where my hands work.”

Anne Stabell (Norway) – Under the Surface

“Under the Surface is part of a project named Slowly Through the Woods. With these

everything that grows, into the gallery in a woven form. The designs are made by

leaving parts of the warp unwoven, so that one can see through and between the

threads, almost like in a wood with leaves, branches and the air between. The visible

“I approach tapestry as a storyteller, reshaping family myths and my own experiences into tales which form the basis of my tapestries. This process was heightened during the lockdown of 2020 when I began walking daily in a local ancient woodland. It quickly became an essential part of my artistic practice; somewhere to think about my work and to confront myself and my memories.”

“I very often work from photographs, sometimes they are taken on the go of whatever catches my eye, and sometimes old ones.  Most of my work is about memory and family. From these old black and white pictures, I’m aiming to keep a woven remnant of people passed away, forgotten, often without a name. My family comes from a place and a story where images of the past barely exist, where memories are so hard to keep, erased by slavery, poverty and hurricanes.”

“I started making this tapestry in April 2020 during the Covid lockdown, when I was furloughed for three months from my job as an apprentice weaver. The image that I chose to interpret for the design is one of my own paintings.  In my painting practice there is a frantic energy and I like to throw and pour paint, creating drips and pools of colour.  I thought it would be interesting to try and express these quite immediate marks in the much slower and considered medium of tapestry weaving by using texture and double weave.”

“Wall of Water evolved out of my interest in ocean plastic and my experiments with tapestry and re purposed plastic bail strapping. Developing techniques to pull and manipulate the warp and weft, leaving warps exposed and unfinished the tapestry became a 3D woven drawing of the sea. On the surface it has colour, movement and flow which conceals what is hidden within, fragments of plastic.”

“The title of this piece comes from the last line of the poem New Era, written in the early days of lockdown by Jackie Kay. The sense of separation from all you know and love immediately resonated with me. I wove the tapestries over the course of a year from 2020 to 2021, in direct response to the isolation imposed by the worldwide pandemic. They are a visual diary of chaos contained.”

“I construct my work using found objects, largely second-hand books. Their built-in history is the attraction for me. The objects contain traces of the past – fingerprints, skin, dedications, scribbled notes – which offer us a glimpse into their earlier life. I work alone, because personal handling of the materials is important to me and relates to the themes, I explore concerning the embodiment of history within objects

“Little Black Dog is one of a series of abstract portraits of my dogs. The motifs allude to the difficulty of photographing a black dog – they usually become blurred shapes. I have worked with a black pallete, a colour often linked to a void or lack of something. The tapestries are covered with a thin Rya, which has a unique quality to create a living surface. It has an inviting effect – you want to get close and touch it.”

“Broad areas of bold colour are woven in a dance of warp and weft, pass by pass. The language of compound colour, textural and structural qualities of yarn are given full rein, choices become almost unlimited. Here woven in large areas with subtle shifts of colour and tone there is new hum and complexity to the surface which on closer view reveals a multi-faceted light, a dialogue of warp and weft at times closely entwined, at others running in counter wise layers.”

“Bright Red is a visual story without a beginning or an end. It is an experiment with depths and diverse colour symphonies within one piece. It is built up by multiple rhythms of shapes and colour. My intention was to create a composition on the verge of tilting, challenging the balance of the image. The weaving technique creates a tactility that captures the light and creates an abundance of small shadows in the surface. The result is an enhanced glow and a sense of depth. From a distance, the tapestry looks virtually three-dimensional.”

“In the spring of 2020, when an unknown virus began to rage worldwide, I stayed at home and came across a book – The Devil’s Cloth. A History of Stripes,by Michel Pastoureau. As a result of reading it I created this striped tapestry.

Stripes are made up of parallel, non-intersecting lines.

Patrick Stratton – Things I do Sometimes: Put Toothpaste on Toothbrush

“My work combines weaving with mechanics to document micro social systems. Using systematized observation, I make pieces that try to highlight small human moments from a playful, existentialist viewpoint. Inspired by writers like Samuel Beckett, I try to do my best with what I have, reducing my experience in a time of overwhelming saturation. This piece, “Things I do Sometimes: Put Toothpaste on Toothbrush” is a continuation of this theme, each part has been hand woven, and then assembled using electronics and wood. The purpose of this is to heighten an uneventful moment in life, by blowing it up to a grand scale and by referencing pop art motifs.”

“‘Blackthorn’, arises from the experience of being in a specific place at a particular point in time. It combines visual and textural cues from two contrasting environments: a common by the sea in Portsmouth, an unapologetically urban space, and from the landscape around the River Eden in Cumbria. The blackthorn tree is a point of reference in the landscape, connecting the two.”

unknown. This is an autobiographical piece taken from my own lived experiences. It

uneasiness vs tenacity and doom vs ecstasy. I use drawing as a visual diary so by

experiences, I can communicate my existence to the wider world.”

In a world of digital everything, what value does the physical hold?

“The tapestry was created during a residency at the Startup Depot Incubator (Lviv, Ukraine) from October 2020 to January 2021. The work took close to 514 hours to complete, from a sketch developed using digital media. The weaving of computer graphics has been an ongoing experiment.”