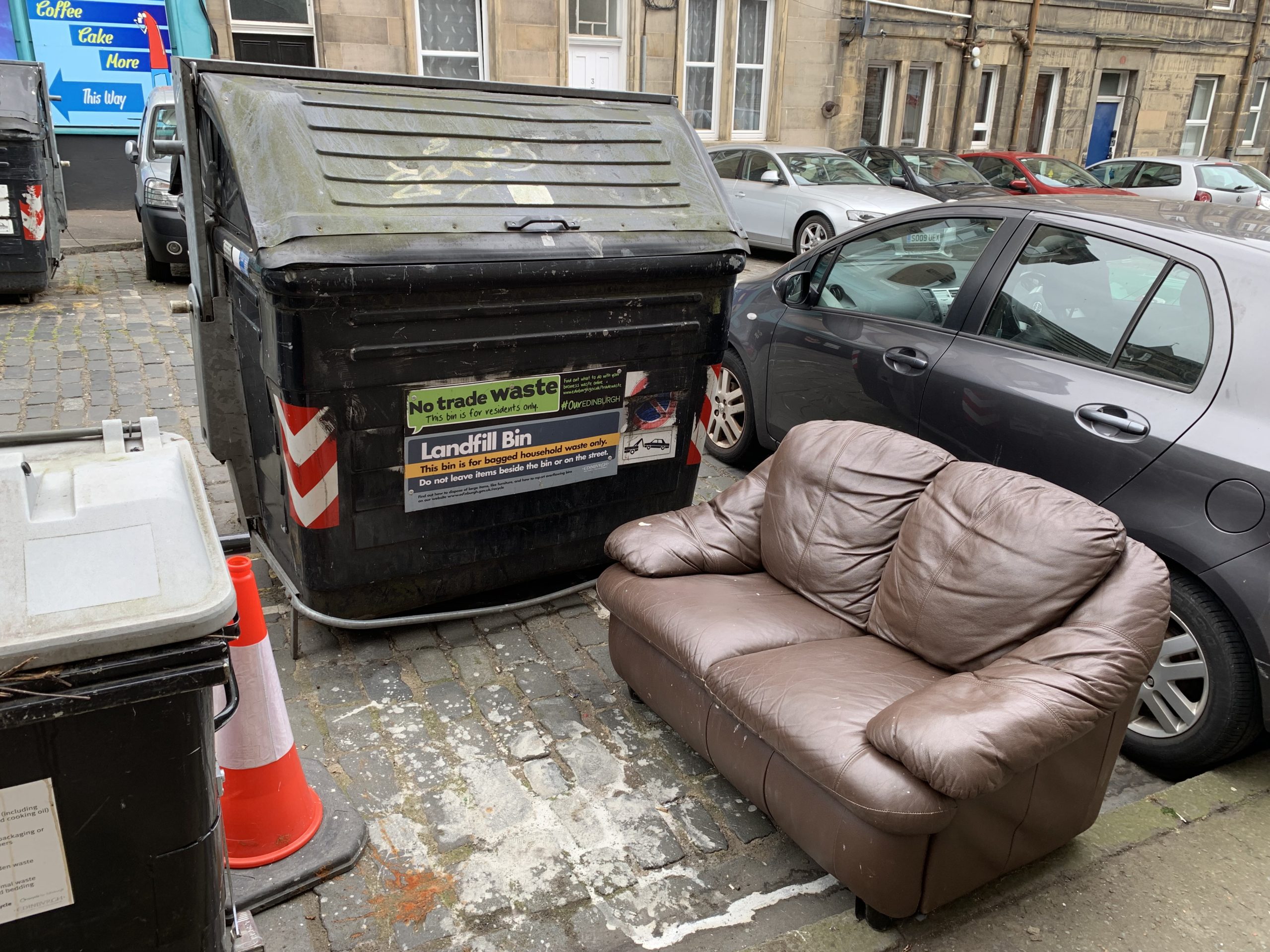 The council took the decision in April that it will scrap the use of gull proof bags and recycling boxes in the city centre, and install permanent fixed bin hubs instead, which will contain seven large waste and recycling bins.

These hubs could be up to eight metres long and will be installed every 100 metres along every New Town street.

The gull proof bags were introduced in 2013 and now New Town residents are forming a campaign to stop the council’s proposed action.

The following letter was received by The Edinburgh Reporter from local resident, Simon Price, who also kindly supplied photos.

As reported in The Edinburgh Reporter on June 30th, Edinburgh council has decided to emplace hubs of communal waste bins throughout the iconic, heritage streets of the New Town. This is to replace the gull-proof bags (GPB) and recycling boxes that have worked well for the past nine years.

The bin hubs, each comprising 6 or 7 bins, will be located within 50 metres of homes, meaning that there will be a large number of them. As someone who truly appreciates the beauty of our Georgian streetscapes, I find this appalling.

Elsewhere in Edinburgh, communal bins are regularly abused: trade waste is dumped in and around them, they are emptied carelessly and many get damaged and not repaired, and they are subject to graffiti tagging. The “poster child” of the “bin hub” scheme is Albert Road in Leith. I recently visited there and was disgusted and truly saddened by the squalor I saw (I attach some photos); the council should be ashamed.

Several bins were damaged, one completely missing the lid and emitting a foul smell, there were split bags, broken glass and debris around several others. I even saw household furniture dumped next to one. I reported this and the council has promised to clean it up, but when I asked about their plans to prevent reoccurrence, they did not reply. I am appalled that the council believes this type of waste management scheme is appropriate for any street in the city, let alone the World Heritage, Georgian, New Town streets.

What would visitors think when they come to see this iconic architecture and have to put up with the sight of council refuse dumps cluttering the 200 year-old cobbled streets?

I have contacted and spoken with several council members, the New Town and Broughton Community Council (NTBCC), Edinburgh World Heritage (EWH), and Zero Waste Scotland. I have also contacted several MPs with limited response; Deirdre Brock’s office simply saying that MPs have “no sway” in this matter. The reasons given to me by the council in support of the bin hub scheme are in my view very weak. For example, they assert that the bin hubs will increase recycling, but Freedom of Information responses do not provide the evidence to support their arguments. The council made the decision to abandon the gull-proof bags without planning permission, with no consultation with residents or heritage organisations, and without undertaking a transparent environmental and social impact assessment. As such, I cannot see how they can possibly assert that the bin hub scheme is the best option for waste management in the heritage area. The best solution could only be achieved through open, genuine consultation with all stakeholders.

I believe that the council members have acted beyond any reasonable mandate, and unilaterally selected a scheme based purely on cost; in other words, the lowest cost solution to provide basic services regardless of the views of stakeholders. Indeed, I have confirmation from one councillor that cost was the primary driver.

I am deeply concerned that degrading the beauty of the New Town, will further relegate Edinburgh to a city with a reputation for scruffy, squalid streets, blighted by ugly bins, often broken and overflowing, and surrounded with trade waste and dumped household items. The name “Auld Reekie” is likely to be highly apt once again. This is so saddening and, in the fullness of time, I hope the seven councillors that have taken this decision are each personally held to account for the damage they are inflicting on our city.

I have written to everyone I can think of in the hope that the decision can be reversed, or stalled pending a proper process including stakeholder engagement, in order to identify the best solution for the New Town, and I am very willing to engage in such a process.

I note that Cllr Karen Doran has said that the council is carrying out engagement, including meeting community councils and the heritage organisations. This is too late. The decision has been made. This engagement only concerns where, in detail, to site the bin hubs and is not about the best solution for waste management. I find it truly egregious that no consultation was carried out before any change to the waste management system was decided.

Whilst I accept that for premises run as short-term lets or Airbnbs, communal bin hubs may provide convenience, most residents in the New Town see the existing scheme of gull-proof bags as the best solution. Indeed this is the scheme adopted by the city of Bath.

The New Town and Broughton Community Council (NTBCC) is currently running a campaign to save the GPBs and stop the bin hubs.

For those of us who are proud of our city, and do not want to see it further deteriorate due to irresponsible actions by a council that does not consult or listen to its customers, I encourage others sharing my concern to visit their website.