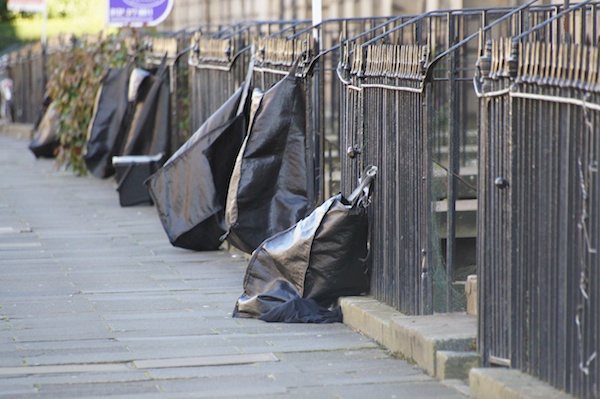 New Town residents are up in arms over the council’s plans to introduce more of the “ugly and intrusive” communal bins into the World Heritage Site.

In April, councillors approved changing city centre and Inverleith neighbourhood bin collections exclusively to ‘on-street communal bins’ – rather than the individual collection of gull-proof bags which is currently in place for many residents.

Properties in the city centre and Inverleith have gull-proof bags for general waste, as well as individual recycling boxes, red for mixed recycling and blue for glass/small electrical items.

Other homeowners in Edinburgh use black bags for non-recyclable waste alongside the recycling box service and there are also some communal bins on certain streets. The new plans will mean many more bins with a bin hub of uncertain design every 100 metres, so that any resident does not have to walk with their rubbish more than 50 metres.

A report which was produced by council officers in April, states: “Reusable gull-proof bags (GPBs) have been used for properties in parts of the city centre and Inverleith wards since 2011 to dispose of non-recyclable waste at the kerbside.

“These properties present (red and blue) boxes separately at the kerbside for recycling.

“The monitoring report shows medium to low presentation rates for both GPBs and recycling boxes.

“Lower GPBs presentation rates are generally associated with proximity to on-street communal bins which can cause overflowing waste issues at these locations.

“In some cases, residents appear to be using the communal bins instead of their GPBs and recycling services.

“The conclusion of the monitoring review is the recommendation that GPBs and the kerbside recycling box scheme are replaced with on-street communal bins, as part of fully integrated waste and recycling ‘hubs’, following the previously agreed standardised parameters.”

The majority of councillors sitting on the Transport and Environment committee agreed with the suggestion, and voted to implement the changes by seven votes to four.

But, residents had been led to believe the council had backed down, until the council wrote to residents recently informing them that changes were imminent.

New Town and Broughton Community Council (NTBCC) has set up a campaign against the new communal bins, calling on residents to write to local politicians such as Edinburgh North and Leith MP Deidre Brock, Edinburgh Central MSP Angus Robertson and Edinburgh Northern and Leith MSP Ben Macpherson. The community council has made it very easy to pen the letters with a page dedicated to the campaign on their website. At present more people support the campaign than oppose it.

The NTBCC warn that the bin hubs will be 8 metres long in lateral parking areas, that there will be hubs on both sides of the street and there would no longer be doorstep refuse collection. In Great King Street there would be eight bin hubs.

The NTBCC and the New Town Residents’ Associations state:

“The character of the New Town should not be needlessly damaged with widespread, inappropriate street clutter.

“Recycling can and should be increased by improvements to existing services.

“To safeguard the outstanding streetscape of the World Heritage Site, current refuse collection methods must continue until a better system is developed.”

Inverleith councillor Gavin Barrie, Edinburgh Party of Independent Councillors (EPIC), said: “The major issue here is that residents deserve to be consulted when changes are going to take place in the areas where they live.

“It should not be ‘game set and match, this is what we’re doing to you’; the council should be doing things for people, not to them.”

A spokesperson for The City of Edinburgh Council said there are no figures on the number of potential lost car parking spaces as the locations of each of the bin hubs is still to be determined. (By way of clarification The Edinburgh Reporter is not really too worried about the loss of car parking spaces – some of these should be given over to secure cycle parking in any case.)

Cllr Karen Doran, Environment Vice Convener for the City of Edinburgh Council, said: “We are carrying out engagement in the affected areas across the city ahead of the communal bin hubs roll out so residents are aware of our plans.

“We are holding additional meetings with community councils in the New Town and working with Edinburgh World Heritage to minimise any impact by taking into account the unique heritage of the area.

“There are numerous benefits to having these bin hubs at the same location – it makes recycling easier and more accessible as they’re in the same place as non-recyclable waste so removing barriers from residents recycling.

“This also supports our targets to increase the city’s recycling performance and meet our ambitious zero waste goals.

“In addition the hubs provide increased capacity, a more reliable service and reduces overflowing bins and street clutter, as well as making our waste and recycling operations safer for our staff .

“Bringing the different bin facilities into one location will help minimise any impact on parking spaces.”

Or perhaps the city council could take a lead from the local authority in Taiwan where the refuse trucks pass by around three times a day. No resident is allowed to put refuse on the street. Instead when the locals hear the music they go out to the street with their own bags of rubbish, throwing them on board.