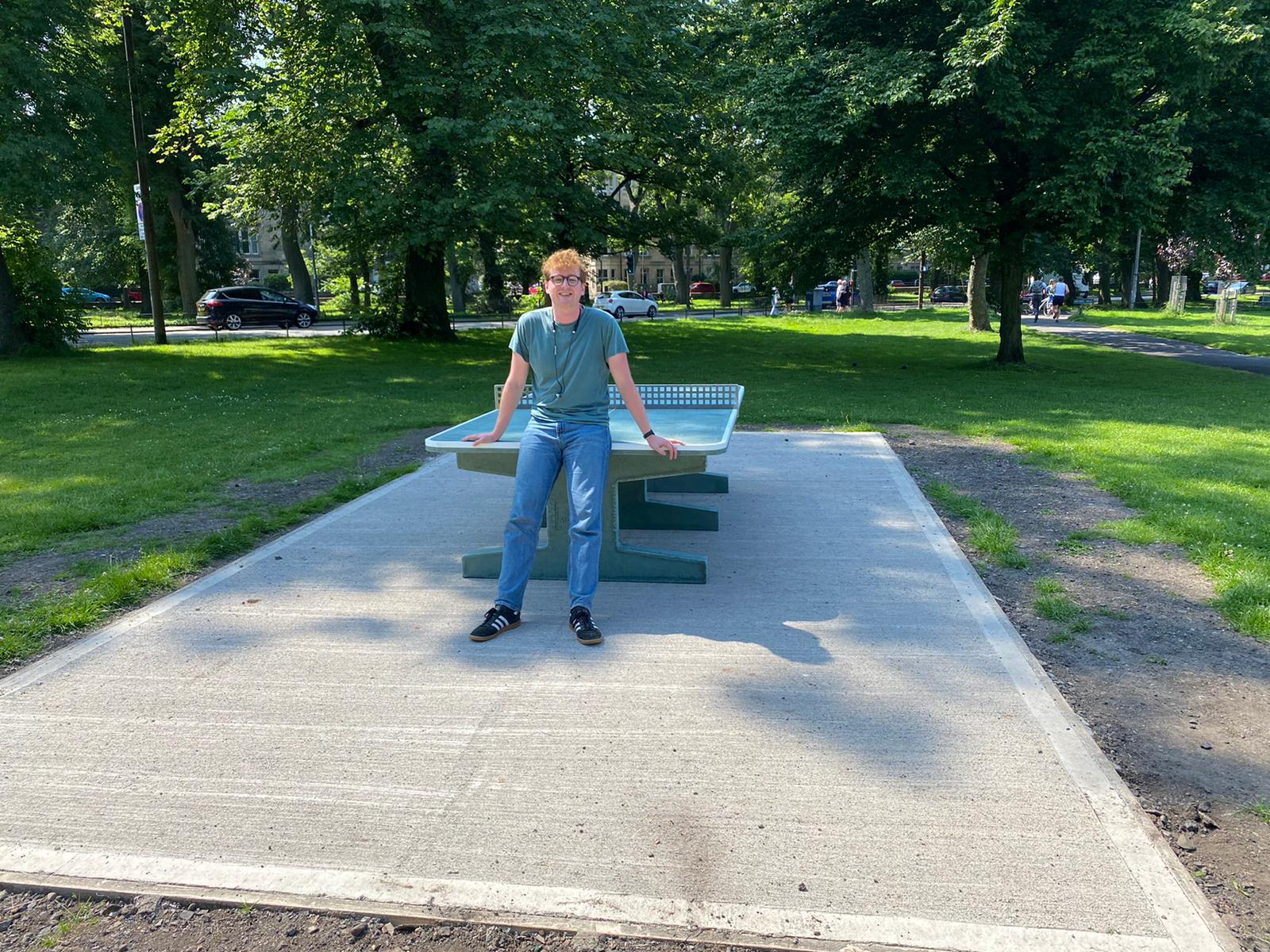 Thanks to some hard batting by local resident James McGinley, a new table tennis table is now installed in The Meadows for everyone to enjoy.

The table is sited at the east end of The Meadows near the play park.

James (25), a product design engineer, told The Edinburgh Reporter: “I am an avid sports player, but during the pandemic it was hard to keep active and see friends. Table tennis is quite accessible to everyone and it is quite sociable too – whether you are playing singles or doubles. I had played a lot at university but it is much better to play outside.

“My friends and I played at a few tables around the city in recent months and some of those, like the one in Roseburn Park are only about fifteen minutes away by bike. I joked about having one on The Meadows, and then began to wonder why it wasn’t happening. I thought it would be really welcomed by locals.

“I contacted Friends of Meadows and Bruntsfield Links (FOMBL), and spoke with their chair, Jim Orr, and Neil Roger, another member, who helped us find funding for the project. They gave us a good helping hand to get the project started.

“We had many discussions about location and when that was signed off by FOMBL, it was a case of getting the money together. It cost about £6,000 to put the table in as it has a concrete base and a metal net. We applied for £4,000 from the council’s Local Community Grants Fund and with a contribution from FOMBL and some help from the council’s parks budget we had enough to pay for it. It was then a case of working with the Parks Officer and applying for planning permission complete with all engineering dimensions.

“Two and a half months later we were told permission was granted, so we ordered the concrete. Once laid it took about four weeks to set.

“The table came from near Liverpool and it was delivered and installed in about half an hour.

“It has been used non-stop by a range of ages, everyone from retired to students and school kids.

“I pass it on the way to and from work. It makes me very happy to see it being used so well.”

For the moment you need to take your own bats and ping pong balls but there may be an equipment hire scheme in future.

Jim Orr, Chair of Friends of Meadows and Bruntsfield Links (FOMBL) said: “The signs are that the new table tennis will be a huge success as it’s been in constant use since it was installed. We’re very grateful to the council for supporting us with the funding and would strongly recommend such a project to other parks groups in the city too. We’re already looking at fundraising for a second one.”

The next table would be put in a different location, although it would require funding and planning permission.