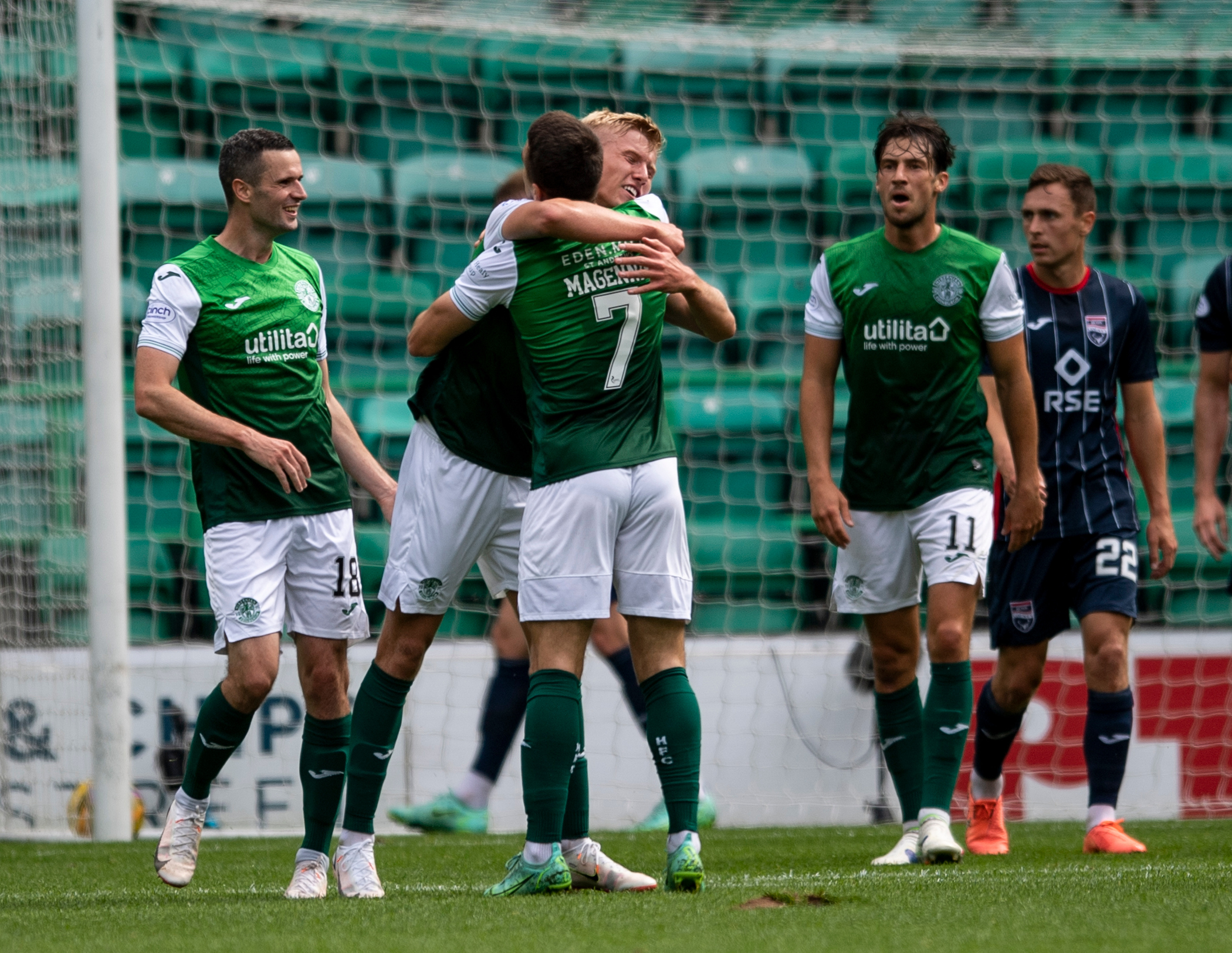 Hibs leapfrogged Hearts to go top of the league with a comfortable victory over Ross County at Easter Road this afternoon. Hibs controlled the game from start to finish playing some wonderful one-touch football, particularly in the first half.

Head Coach Jack Ross made two changes to the starting XI that drew with Rijeka in the Europa Conference qualifying match on Thursday. The much wanted Josh Doig took over from Lewis Stevenson whilst Kevin Nisbet missed out with a dead leg and was replaced by Christian Doidge.

Ross County No 6 Harry Paton was lucky to escape a card for a reckless challenge of Jake Doyle Hayes then Martin Boyle almost gave Hibs an early lead but his angled drive flew narrowly past the post.

Paul Hanlon required treatment for ahead knock then Jordan White went close with a free-header from 8-yards that went narrowly over the bar.

From then the first half belonged to Hibs who mounted attack after attack with Boyle in particular causing the County defenders problems down the right wing. Only desperate defending kept the score line blank until the 22nd minute when Boyle, who had changed wings, cut in from the left and unleashed a powerful 30-yard strike which deflected off an defender and looped past Ross Laidlaw into the top right hand corner of the net.

The goal was no more that Hibs deserved and they quickly doubled their advantage after Jamie Murphy beat two defenders and slid the ball into the path of Doig who found the head of Kyle Magennis who made no mistake from 6-yards.

Boyle then had the fans on their feet with a 50-yards run before he picked out Murphy on the penalty spot but the former Rangers man’s effort deflected over the bar.

Ryan Porteous tried his luck from 40-yards but his effort was too high.

Former Hearts’ player Ross Callachan was lucky to escape punishment for a reckless challenge on Doig but the referee decided a warning was sufficient.

Hibs made it 3-0 in the 32nd minute when Murphy collected the ball in midfield and found Paul McGinn in space on the right. McGinn picked out Doidge who rose highest and headed the ball past Laidlaw.

Callachan was unlucky with a well taken volley which flew inches over the bar then Joe Newell split the County defence with a sublime through ball which Doidge knocked past Laidlaw but the ball rolled agonisingly wide.

Darren McGregor replaced Hanlon at the break and the second half started with Callachan chopping down Doig and again receiving no punishment to the fury of the Hibs’ fans.

Boyle then played a wonderful 1-2 with Newell before cutting along the bye line but his cut back missed everyone.

Boyle was then brought down on the edge of the area but referee Grant Irvine waved play on, again to the frustration of the fans.

Harry Clarke was lucky to escape a red card for a dreadful foul on Murphy as Hibs looked to add to the score.

Great skill by Newell set up Doidge but his shot was deflected wide then Boyle was unable to control a fine through ball from Magennis.

When County did manage an attack they found McGregor in his usual commanding form.

Dan McKay replaced Boyle with 20 minutes remaining and the Hibs’ player left the field to a well-deserved standing ovation.

After the final whistle Ross told BBC Scotland: “My players were terrific. Just a brilliant afternoon for us. It’s a really positive start.

“Martin Boyle’s been brilliant since he came to the club. He’s as good as anyone in that country in that position when he’s in that type of form. Josh Doig was terrific. He’s a top player.”