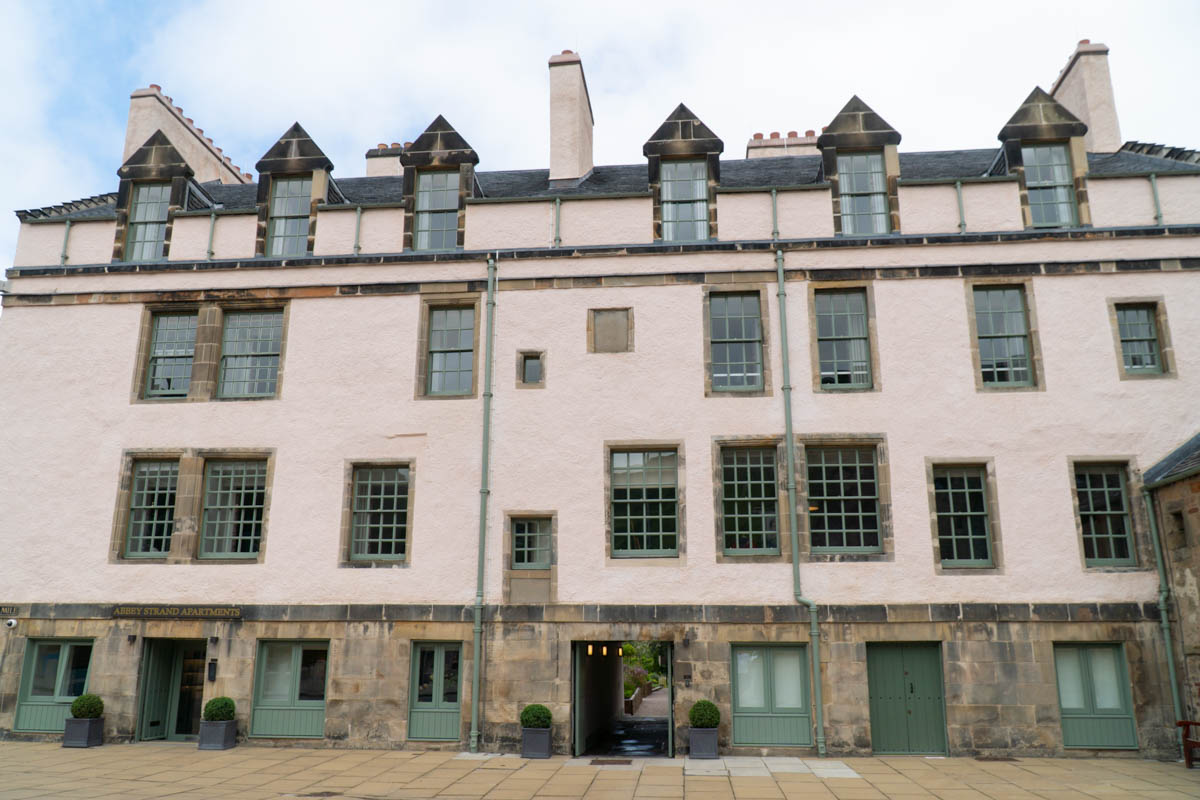 We have been told to stay at home for over fifteen months, and we have. Looking around for a change from our own four walls it was a little odd at first to choose a mini break just a mile from the front door.

But it turned out to be a wee adventure, and a wonderful way of looking at Edinburgh from a fresh perspective.

Offered as a complimentary night away from home, it was easy to say yes of course, but also remarkably easy to get there. We loaded up the bike panniers and set off on the short journey to Abbey Strand Apartments. These are beautifully restored apartments so close to the Palace of Holyroodhouse that it seems natural to adopt a few airs and graces when you arrive. You can also take your corgis with you, but there is an extra charge for the deep cleaning after you leave.

There are nine studio, one and two bedroom apartments in the historic row of buildings looking over to The Scottish Parliament which are accessed through a pend and then up a winding stair. There is no lift in this historic building, and anyone requiring accessible accommodation will have to seek alternatives in the other self catering apartments run by Cheval either at The Edinburgh Grand or the apartments at 329 High Street which are almost ready to open.

Each apartment has been named in recognition of the long history of the building and the area, and you can opt to stay for one night or a year according to General Manager of Cheval Collection Edinburgh, Gavin MacLennan. There was a time when Chris Stewart’s own management company, Lateral City, ran the operation, also under the managerial eye of MacLennan, but after a two year search the company decided to outsource the functions to Cheval who now deal with everything from booking onwards. Their staff ensure that the apartment is stocked with Nespresso coffee, tea, sugar and fresh milk. MacLennan moved employers, but loves all of the Edinburgh apartments which are luxurious and individual. Gavin told me to look out for the silhouettes in reception at Abbey Strand – these are employees of Cheval dressed up to look like 16th century Edinburgh people.

The building is crafted from a former courtier’s house and is believed to be about 500 years-old. The west side is the earliest surviving structure, and although the building was used mainly as a weapons store, it later became a fashionable dwelling during the Renaissance and the third storey was added in 1566.

There are lovely touches of history inside with exposed stone walls and some apartments have medieval fireplaces. What then would former inhabitants such as Mary Queen of Scots have made of all the modern twists such as the BOSE bluetooth speaker so that visitors can play music from their smartphones, or the high tech oven which incorporates a microwave with its operational touch screen. And of course there is complimentary WiFi which is now standard in most hotels and self-catering apartments.

The colour scheme both inside and out was produced by traditional methods and was chosen by HRH The Duke of Rothesay, and the careful renovation took over two years to complete, very much under direction from Prince Charles. Look carefully at the outside which is apparently a pale pink.

The Lady Margaret Seton apartment became home for the night with a TV in the living area and the bedroom, a comfortable sofa to sink into and plenty of room everywhere for the range of stuff we had managed to bring with us – and it turned out for the couple of visitors who came to tea. It is always pleasing when even in a one bedroom apartment there are enough seats for everyone and plenty cups and saucers.

The bed linen is of course sumptuous, the bathroom sophisticated and everywhere is scrupulously clean. There is also as we found out CCTV which meant that leaving our bikes in the pend was no problem at all, as Palace security kept an eye on them.

It is the Chris Stewart Group which has been responsible for renovating Abbey Strand in partnership with Royal Collection Trust and having already seen the interiors at Old Town Apartments and The Edinburgh Grand, the look was nothing less than the five star luxury I had expected.

And here is my top tip for going anywhere on a self-catering holiday – throw a few extra dishwasher tablets into your overnight bag and a tea towel or two. No matter how luxurious the apartment is they always come in useful when you are really catering for yourselves.

Although it would have been quite easy to provision for the stay we opted to ask Mary at The Rose Theatre Café to cater for us. She provided the most beautiful blueberry scones with jam and cream and chocolate brownies for afternoon tea. Dinner was a very easy to warm up Chicken Supreme with mushroom and wine sauce with tarragon, roast potatoes and green beans. All of this was exquisitely prepared, and it really made our stay a little bit more special. There are restaurants on the Royal Mile, and it is also easy to order groceries to be delivered to your apartment before you arrive. At this location there is no in-house restaurant or bar but there is a lovely reception area which can be used by guests for business meetings where there are also coffee facilities.

The Café at the Palace can provide breakfast hampers for guests at Abbey Strand, although it was not open during our visit, but we are told everything is adorned with crown stickers.

The biggest find was the secret garden behind Abbey Strand which is owned by The Royal Collection Trust (RCT) but which is open to the public. It is simply beautiful and will certainly merit a visit during each of the seasons to admire the exquisite planting inspired by some of the earliest recorded gardens on the site.

Abbey Strand Learning Centre was created by Chris Stewart during the renovation of the whole building and will be used by school and community groups to explore how plants have been used to improve health and wellbeing. The centre is all part of the Future Programme which is a major programme of investment at the Palace by RCT. HRH The Prince of Wales recorded a message about the garden here.

The new garden consists of three distinct areas, each representing a phase in the Palace’s 900-year history. A flowering meadow of medicinal plants evokes the 15th-century monastic gardens of Holyrood Abbey, once one of the grandest medieval abbeys in Scotland. The remains of the Abbey can be seen as part of a visit to the Palace (and do remember if you go to the palace to get your ticket validated so that you can use it again within the year). Among the meadow planting are daisies, which were used to treat coughs and wounds; sorrel, once thought to cure ulcers, sores and ringworm; and mallow, used to treat scurvy. Nearby, flowering bulbs, including crocuses, tulips and alliums, have been planted in a geometric pattern to reflect the design of 17th-century gardens.

A third area reimagines the physic garden that was established in the Palace grounds 350 years ago by the doctors Sir Robert Sibbald and Sir Andrew Balfour, two founding members of the Royal College of Physicians of Edinburgh. Created in 1670 to teach students about the medicinal properties of plants and to provide pharmacists with fresh materials, the Palace’s original physic garden was the first of its kind in Scotland and only the second botanic garden to be established in Britain.

The new physic garden contains medicinal and culinary plants that would have grown in the 17th-century garden. These include fennel – once used to aid eyesight, to treat the bites of snakes and mad dogs, and as an antidote to poisonous mushrooms – and borage, which, when added to wine, was said to impart courage and treat eye problems, heart disease and jaundice. Adjacent beds contain plants, such as lavender, bergamot and lemon balm, that were used for scents, dyes and insecticides.

Five years after the first physic garden was created at the Palace, the plants were moved to a much bigger site at Trinity Hospital, now the location of Platform 11 at Waverley Station, and then to Leith. In 1820 the garden was established in Inverleith, where today the Royal Botanic Garden Edinburgh covers over 70 acres and displays more than 13,000 plant species, while continuing its world-leading plant science, horticulture and education.

James Sutherland, the young, self-taught gardener who oversaw the move of the physic garden from the Palace to the Trinity Hospital site, recorded the plants in Scotland’s first botanical publication,Hortus Medicus Edinburgensis. Sutherland became the first Regius Keeper, a title now given to the head of the Royal Botanic Garden Edinburgh, and in 1699 was made the first King’s Botanist in Scotland. A copy of Hortus Medicus Edinburgensis presented to The Queen in 1964 by the Royal Botanic Garden Edinburgh is displayed at the Palace of Holyroodhouse to mark 350 years since the physic garden was first established at the Palace.

Tim Knox, Director of the Royal Collection, said on the opening of the garden last winter: “2020 marks 350 years since the creation of the first physic garden at the Palace. I am delighted that this new public garden, an important element of the Future Programme project at the Palace of Holyroodhouse, has been completed in this anniversary year and can be enjoyed by our visitors and the local Edinburgh community alike.”

This was a lovely find on our doorstep and an easy way to recharge the batteries. Yes, a change is as good as a rest.