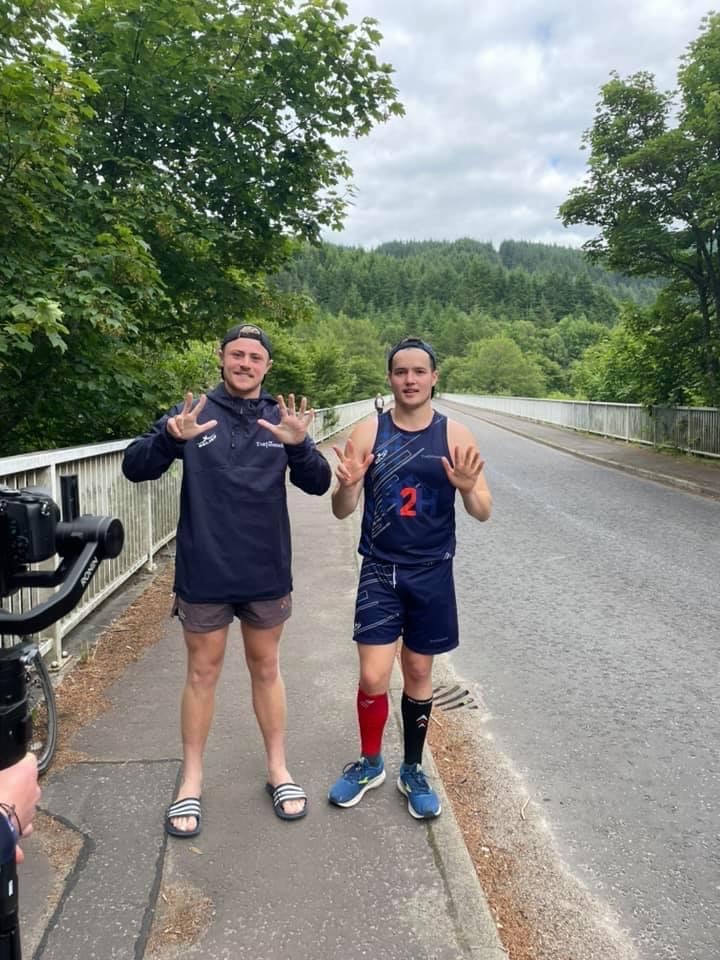 Two young men from Edinburgh, Toby Gray (18) and Charlie Brett (22), are currently in the midst of running from Highlands2Home, an epic running challenge from Torrisdale in Sutherland to Edinburgh, covering 314.4 miles.

Toby and Charlie, calling themselves The Tartaneers, have been friends for years, and through this act of endurance and fitness, are hoping to raise at least £30,000 for charities which provide vital support to families hit by cancer. Make2ndsCount is a patient and family-focused charity dedicated to giving hope to women and men living with secondary cancer.

Based in Edinburgh, the charity aims to raise awareness and fund medical research that will contribute to increasing patients’ quality of life. Marie Curie is the other beneficiary, the country’s leading end of life charity providing frontline nursing and hospice care amongst other support services.

Having mapped out the route themselves, and split the miles into twelve daily marathons, taking in Inverness, Aviemore, & Perth, The Tartaneers, are now just four marathons away from arriving home in the Capital on 25th June.

“This challenge is incredibly tough, but we are within the closing stages now,” said Toby, who, as the 1XV Hooker for Merchiston Castle School, is more at home on the rugby field than running marathons. “It’s in memory of all our loved ones who have been taken by cancer and for families everywhere whose lives have been impacted by cancer,” he said.

“We’ve discovered a new-found passion to push ourselves beyond the limits for a cause bigger than ourselves.” explained Charlie, who is currently in his last year at Edinburgh College, having played touch rugby internationally and rugby union to a high standard. “Neither of us had even run a half marathon before we did this, let alone a full one. As rugby players we are using completely different muscles!”

The duo are not new to challenging fund raising efforts though, and wanted to make a difference during the on-going pandemic. In June last year, they completed a demanding 24-hour challenge comprising a 2km row, 3km run, and 10km cycle (360km – 223 miles) – every hour on the hour – raising an astounding £24,000 for Cancer Research.

“We have a mindset of pushing ourselves and never settling,” said Toby, who has been studying for his A Levels. “We’re both drawing strength from the lessons we learned on the rugby pitch. We felt we could either sit around and do nothing during the lockdown last year, or get involved in something we could be proud of. We were delighted with what we managed to raise last year for Cancer Research, so this current challenge is taking it all a step further.”

“We’ve definitely improved our skills in mapping too!”

H2H, as it has been nicknamed, has attracted a number of prestigious sponsors who have supported various legs of the boys’ journey down through Scotland, from the crags of Sutherland and Caithness, through the lush valleys of Highland Perthshire, to the Central Belt.

Additional practical, as well as emotional, support is being given to The Tartaneers in their challenge by a core team of eight family members and helpers who are following them in vehicles, and on bikes. Videographer friend Jack Nicholls, also from Edinburgh, is filming the whole challenge to share on social media channels.

Those wishing to track Toby and Charlie’s progress, over their remaining routes, can do so by using Open Track, which utilises GPS tracking.

“We’ll feel elated – if a tad exhausted – when we make it to the Capital later this week,” said Toby. “We’ve already raised just over £30k, the money is still coming in, so now we’re bidding for £40k!”

“We’d like to thank everyone who has supported us both prior to, and during, the challenge,” added Charlie. “We’d especially like to thank our business sponsors without whose support we simply would not have been able to do this. We think that our physios also deserve special mention for keeping us in tip top shape to complete this test of endurance. Some of the marathons were over very hilly and challenging terrain.”