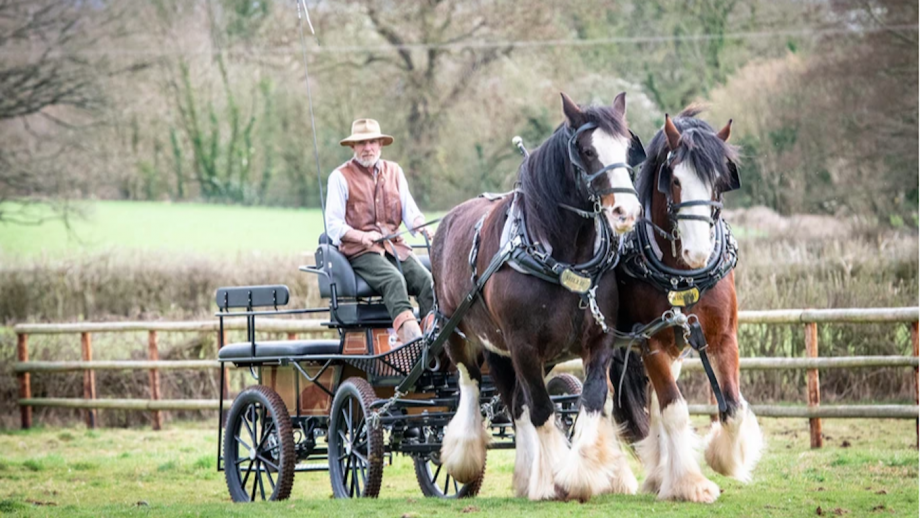 On the fundraising journey which Jamie Alcock is undertaking from Gloucestershire to Elgin, he will have two companions, his two Shire Horses, Millie and William.

He will be raising funds for the charity Police Care UK which gave his brother round the clock care for more than a decade.

Millie and Willam, will begin their journey on Saturday, 5 June 2021, when they will be sent on their way by the chief constable of Gloucestershire and representatives of the Fire and Rescue Service. The horses will be accompanied by Jamie’s collie Boo Boo Beithe, who will help with security, while Jamie is also inviting up to two people at a time to join him on his carriage for a donation of £30 per person.

The journey begins on 5 June 2021 and will take around eight weeks. If anyone can help out by offering a field for Jamie and his horses to stay overnight along the route then contact katie@coldcroftfarm.co.uk. Jamie’s wife, Katie, is dealing with organisation.

The journey can be followed in real time online and on Instagram at @straightfromthehorsesmouth2021.

Jamies brother, John was an officer with Grampian Police stationed at Elgin. He was involved in a road collision in 2003 as he headed to Balmoral to conduct a royal protection shift. His injuries were such that he required round the clock care at home, never regaining consciousness. John died in 2017 and was buried with full police honours at Garmouth north of Fochabers.

Jamie said: “As sad as it what happened to my brother was, the real inspiration was the way the police charities and federation responded, not just to what happened to him on the day but afterwards. They did a lot to help his partner and young son. He eventually received a big compensation payout, which was eaten up with care, but the charities wouldn’t take a penny back for what they had done,” Jamie said. “I have always thought that I could never repay them, but I know with what has happened with Covid in the last 12 months, charities have taken a massive hit and now I want to raise money to put it back in the pot to help other people.”

Police Care UK Chief Executive, Gill Scott-Moore says “We are very honoured that Jamie and his team are undertaking this huge challenge to support our charity. We see families that are significantly affected by the challenges of policing every single day and we are so very appreciative of anyone who supports us by raising funds to enable us to continue doing so. Jamie and his family must have had such a terrible time when his brother was sadly injured on duty, and we are glad we were able to support them at the time. We don’t ask for anything in return for what we do but we are so very grateful to Jamie, Willam and Millie and the rest of his support team. We wish him the very best of luck on his challenge and we’ll be there all the way!”

The other charity which will benefit from the funds raised is The Fire Fighters’ Charity.

Jamie has already had support pledged by his veterinary physiotherapist Vet Physio UK, who will treat the horses before and during the trip, and Carriagehouse Insurance, which has insured his journey at its own expense. The return transport for the horses and carriage is being paid for by CorrMed Medical Bags.