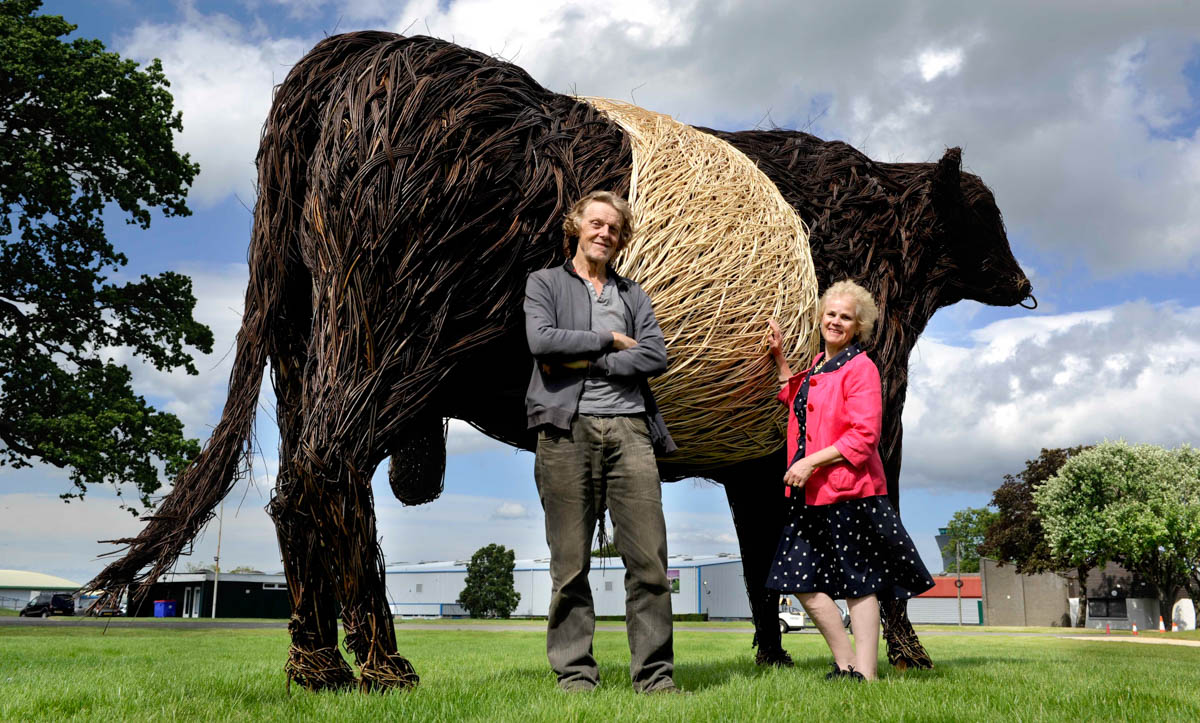 Beltie bull, a one-tonne wicker sculpture hand built in Dumfries and Galloway, has arrived in Edinburgh where it will be a centrepiece of this week’s Royal Highland Showcase.

Nearby, the famous underpass where the finest livestock are led in and out of the Ingliston showground arena, has been painted with a magnificent mural depicting farm animals, horses, wildlife and scenes from south-west Scotland.

The Royal Highland Showcase in partnership with Royal Bank of Scotland, runs from 14-20 June, and replaces the annual Royal Highland Show which cannot take place due to COVID-19 restrictions. While many of the classes are still the same, and feature the best of Scottish agriculture and rural life, it is all taking place behind closed doors, but is being livestreamed for free worldwide.

The artworks project has been led by Cathy Agnew on behalf of Fiona Armstrong, honorary president of the Royal Highland and Agricultural Society of Scotland (RHASS), and her President’s Initiative which is seeking to showcase the best of Dumfries and Galloway’s farming, culture and heritage.

Each year RHASS invites a different region to act as “host”, allowing it to highlight the best of its rural economy. This year it’s the turn of Dumfries and Galloway which prides itself on its thriving creative community.

The bull was made by willow artist and sculptor Trevor Leat, whose figures are familiar from Edinburgh’s Hogmanay celebrations, the Wickerman music festivals and a variety of National Trust for Scotland properties.

Cathy said: “It was fortuitous timing to be able to commission Trevor to construct this fantastic creature for the Royal Highland Showcase. I’ve known Trevor’s work for a number of years and for me he epitomises the very best of craftsmanship and creativity that we have in Dumfries and Galloway. His works have attracted both national and international acclaim.”

Trevor, who is based in a small village workshop in Auchencairn, said: “This was a wonderful project to take part in.

“What I wanted to capture was the character of these truly iconic cattle – the strength, muscle, power and energy of the bull – but also something of the spirit of the Galloway hills where they are bred and which are their homes.”

The underpass mural, which features images of cattle, sheep, goats, wild geese, horses along with other birds and animals, is a collaboration between OutPost Arts, of Langholm, and Edinburgh artists Ross Blair (aka Trench-One) and Brian McFeely (aka Elph).

Lucy MacLeod, Creative Director of Outpost Arts, said: “We were really keen to reflect the character of the region, its culture, natural environment, wildlife, agriculture and multitude of different landscapes.

“It’s been an real group effort between OutPost Arts and Ross and Brian. It’s such a brilliant site for a piece of work like this in a truly iconic location where it will be seen by hundreds of thousands of people for years to come.”

Ross, who was in the headlines last week after President Joe Biden was presented with a framed photograph of one of his murals that depicts the anti-slavery campaigner Frederick Douglass, said the Ingliston mural is intended to have great impact.

He said: “We hope that people will go ‘wow’ as they walk towards it and that they will really enjoy the sheer variety of images and scenes – all inspired by Dumfries and Galloway.”

The artists have even adopted the sort of palette and “open style” beloved of the Scottish Colourists who were closely associated by the pretty harbour town of Kirkcudbright.

Fiona Armstrong, who is also a broadcaster and writer, said: “We really wanted to find some inspiring, fun and imaginative ways to show off the very best of Dumfries and Galloway to the worldwide audiences that will be tuning in to watch the Royal Highland Showcase.

“As COVID restrictions ease we want people everywhere to know how much the region has to offer. These two artworks emphasise what a beautiful, colourful and vibrant place it is to visit and to do business.”

For full information follow the Showcase on social media @ScotlandRHShow.