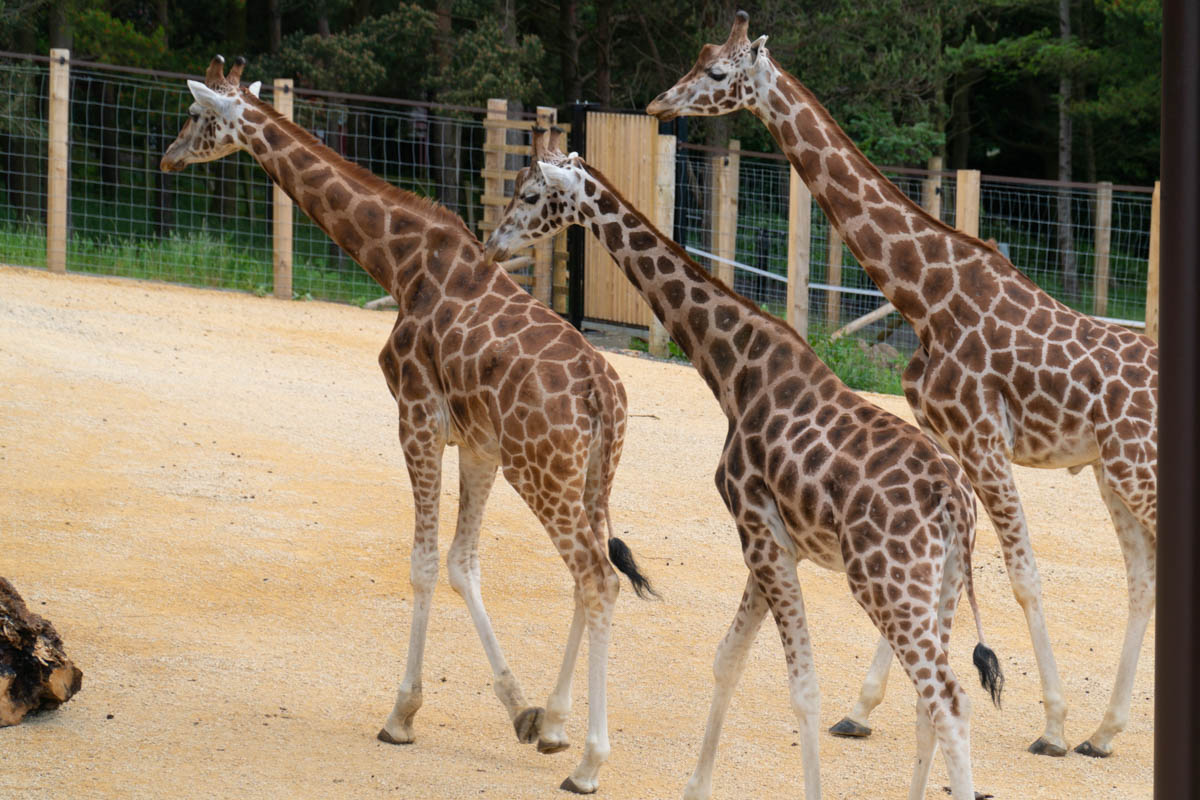 Edinburgh Zoo opened a new giraffe house this month to house five male giraffes which have arrived in the city after an absence of 15 years.

Ronnie and Arrow took up residence at the Corstorphine Road zoo on 11 May and were then joined by Gilbert, Gerald and Fennessy.

The zoo partnered with the Giraffe Conservation Foundation (GCF) and Glenmorangie Single Malt Scotch Whisky to bring giraffes back to the capital and will support vital work to protect the species in the wild.

Giraffe populations in Africa have declined more than 30% in the last three decades and it is estimated there are only 117,000 remaining in the wild.

The five-strong herd will have some of the best views in the city from their brand-new hilltop home and are now on show to zoo visitors from today.

Darren McGarry, Head of Living Collections, at Edinburgh Zoo told us about the five males who have a superb view over Edinburgh from their enclosure high up on the hill. He said: “We kept giraffes here in the late 1980s, early 1990s and all the giraffes that we bred from those original pairs have gone on to produce other giraffes.

“And actually that bloodline comes right down to all of these male giraffes that we’ve got here. So the Edinburgh bloodlines have come back to Edinburgh, and that was something that was quite exciting for me that we were bringing back Edinburgh heritage giraffes if you like.

The Zoo kept giraffes until just over 15 years ago when the giraffes were sent elsewhere. This new house has lots of public engagement areas as the Royal Zoological Society of Scotland (RZSS) wants to tell visitors about conservation and the exciting things that giraffes get up to in their daily lives. Taking all of that into account Mr McGarry said hey have built a “fantastic exhibit”.

Woburn Safari Park’s loss is the Royal Zoological Society of Scotland’s gain after five male giraffes took up residence in Edinburgh for the first time in a decade and a half.

The world’s tallest species are becoming accustomed to the green pastures of Corstorphine Hill as the latest big attraction to pull in visitors to Edinburgh Zoo in a newly built £2.8 million giraffe house.

The zoo has partnered with the Giraffe Conservation Foundation (GCF) and Glenmorangie Single Malt Scotch Whisky to bring giraffes back Edinburgh and will support vital work to protect the species in the wild.

Jonathan Appleyard, hoofstock team leader at Edinburgh Zoo, said: “It is incredible to welcome giraffes back to Edinburgh Zoo and we are so excited to start introducing them to our charity’s members, patrons and visitors after they have settled in.

“Numbers of giraffes in the wild have declined by almost 30% since the 1980s due to habitat loss and poaching, so this is a really important opportunity for us to raise awareness and support the Giraffe Conservation Foundation’s work to save the species.

“Our brand-new giraffe house has been designed with high level walkways which means visitors will be able to meet these wonderful creatures face-to-face, giving them an amazing opportunity to connect with nature and be inspired to join us in protecting them from extinction.”

Julian Fennessy, co-founder of GCF, said: “There are only about 117,000 giraffe remaining in all of Africa. Their numbers have dropped by almost 30% in the last three decades. As this decline has happened largely unnoticed, it is now time that we draw more attention to this silent extinction.

“Zoos play an important role in sharing this message and the new giraffe herd at Edinburgh Zoo can play a vital role in raising awareness and funds for the plight of their wild cousins in Africa.”

Thomas Moradpour, President and Chief Executive of The Glenmorangie Company, said: “These amazing animals are under threat of a silent extinction, which is why we are proud to be official partners of giraffe conservation at Edinburgh Zoo, and to support the work of GCF in the wild.  Through this global partnership, we hope to raise awareness of the plight of the giraffe, and ensure these wonderful creatures remain part of our world.”

August 1938 – Edinburgh Zoo welcomes Scotland’s first giraffe. But there was heightened concerns about transporting Bristol-born George because he was too tall to pass under railway bridges or overhanging trees on roads. George eventually travelled by sea from Avonmouth to Glasgow and then overnight by lorry to his new Corstorphine home.

October 2003 – Sapphire stopped eating and it was discovered she had a fractured lower jaw bone. Vets considered putting her down because the injury was so bad.

October 2004 – Sapphire moved to Fota Wildlife Park in Cork, Ireland, and went on to become a mother to at least six surviving calves.