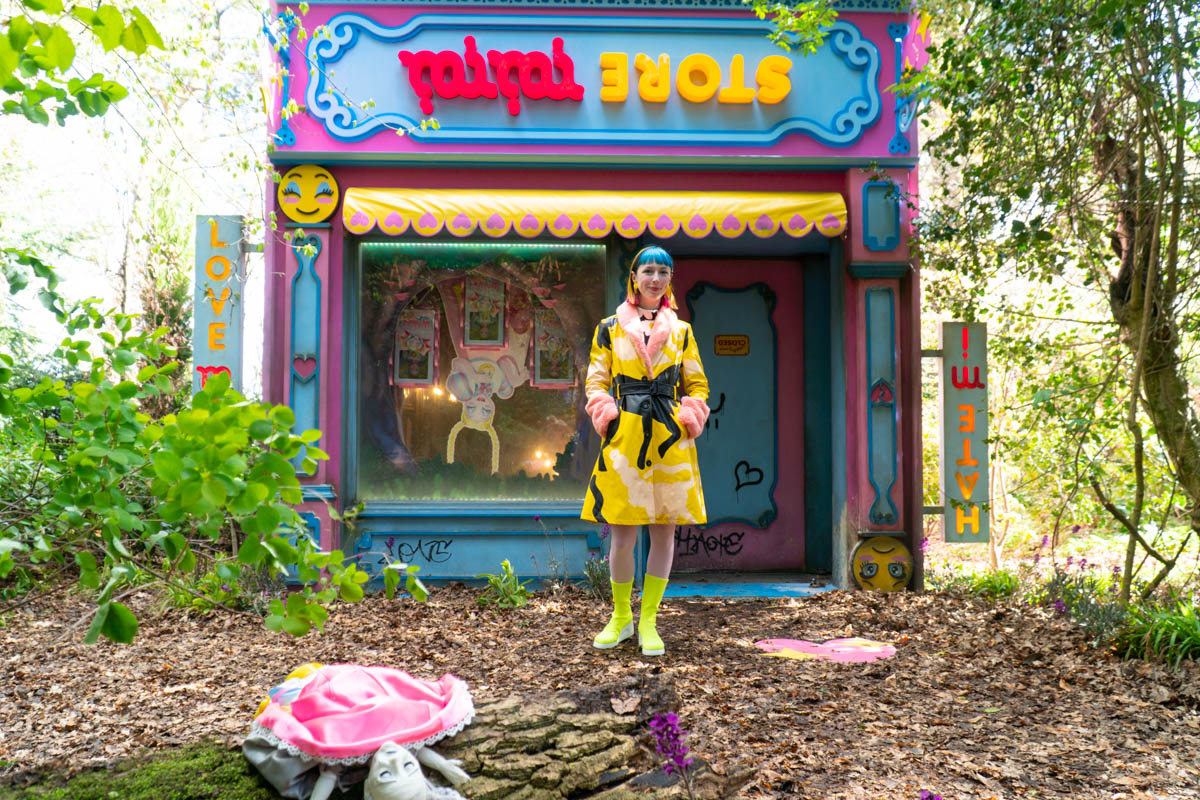 I visited an exhibition of Rachel Maclean’s work at the National Gallery in London a couple of years ago, and in the way of what is impactful, it stayed with me.

The film in the satirical work, The Lion and the Unicorn, was set to a soundtrack of speeches by Jeremy Paxman and Alex Salmond, and featured garishly dressed figures speaking about Scottish independence and the farce of politics. Mainly the characters were played by Maclean herself.

You will be able to see her latest work at Jupiter Artland in an exhibition of Maclean’s four main works from the last decade, and the star of the show will be Mimi.

Satire and fantasy are both parts of Rachel Maclean’s work and she has a very distinctive creative voice. Based in Glasgow, Maclean is an Edinburgh College of Art graduated in 2017 she represented Scotland at the 57th Venice Biennale.

Now the artist will introduce us to Mimi, a creation combining animation and architecture, and her first permanent outdoor artwork. The abandoned high street shop will be sited in the woods at Jupiter Artland, and is the upside down world of cartoon princess, Mimi. This is Maclean’s first fully animated heroine, but she is darkly arch and invites us to see the world of end-game capitalism from her topsy turvy perspective.

To create the figure, Maclean spoke to teenagers from all over Scotland and who were recruited by Jupiter Artland. She talked with them about the pressures they faced during the pandemic, online culture and the decline of real-life spaces on our high streets for young people to express and discover their own identities. Eventually it is hoped to take an iteration of the installation on tour into Scotland’s High Streets.

Founder Director of Jupiter Artland Foundation, Nicky Wilson said: “We have watched Rachel Maclean’s career develop for many years and have always admired her fresh and frank approach to issues that surround us. Although these are always relevant to the present, they provoke timeless questions about identity, power and social context. At Jupiter we have encouraged, and are delighted to see, her create a new fantasy world on the grounds of Jupiter Artland. Not all is what it seems and it’s this jeopardy that makes it such an exciting permanent installation. We hope we can provoke discussions and debate about issues that affect us all but most particularly after the time of COVID. As one of the Scotland’s most celebrated contemporary artists, Maclean’s work challenges audiences, and in its production challenges Maclean as a filmmaker. Mimi will continue to stretch our imaginations through a film that is comical and charged.”

Artist Rachel Maclean said: “Working with Jupiter Artland on this new commission has been incredible. It’s my first foray into outdoor art, and my most ambitious project to date, combining architecture, sculpture and animation. The upside-down world of Mimi has taken years of planning and hard work, so I’m really excited for folk to see it! I hope that the feeling of the world turned on its head resonates with audiences in these topsy turvy times and offers a surrealist and darkly humorous escape from lockdown life.”

Rachel Maclean’s exhibition runs from 8 May to 18 July 2021. Jupiter Artland’s permanent collection of sculptures is already open for the general public to connect with art, nature and the outdoors. Further details and booking for the springtime walks can be found on the Jupiter Artland website.