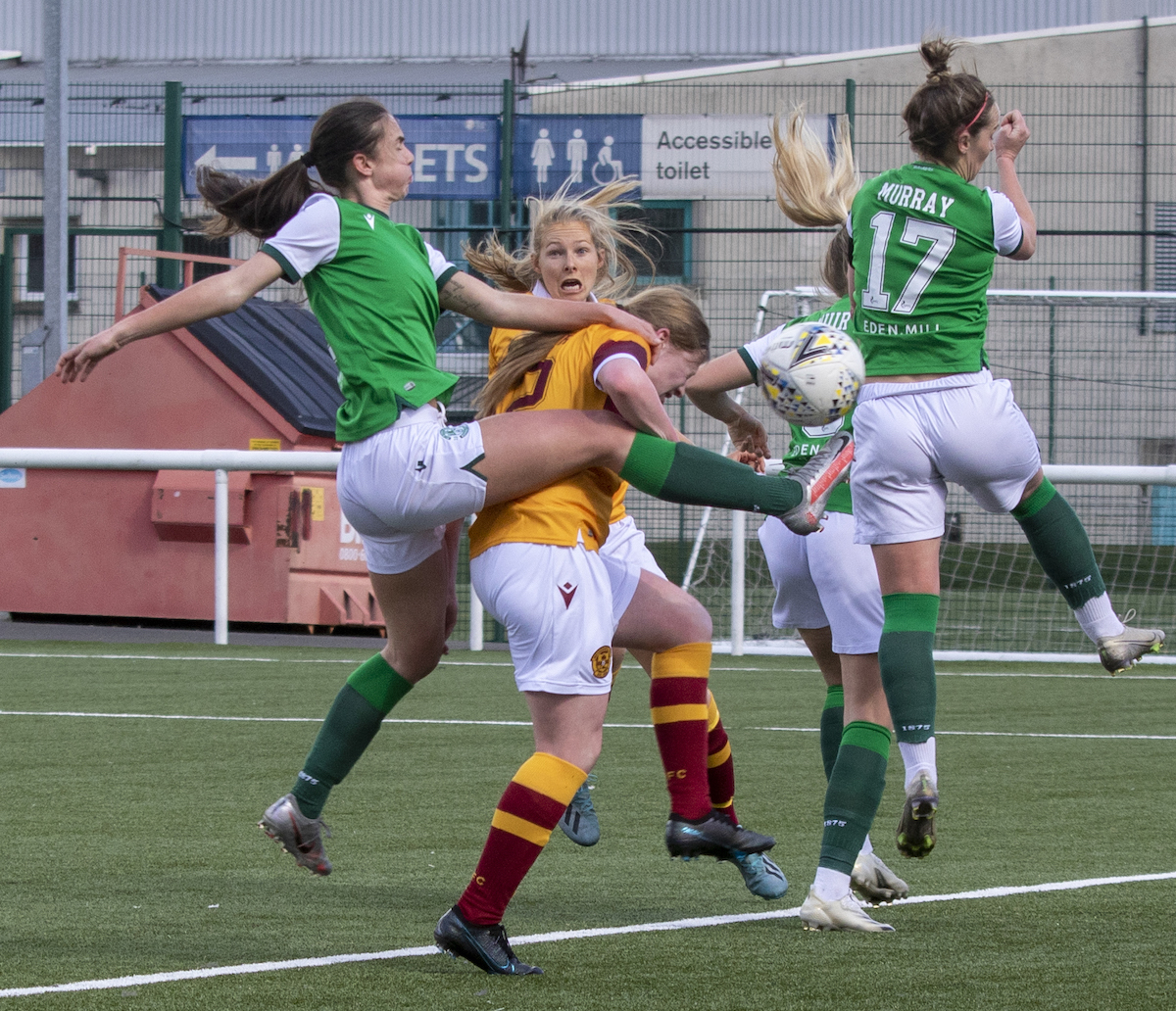 Hibs manager Dean Gibson admitted that his players turned up with the wrong attitude in the first-half of Sunday’s 3-2 victory over Motherwell and were fortunate to go in at the break with a narrow lead.

The visitors took the lead in the 26th minute when Claire Adams’s corner found Rosie Slater, who fired the ball into the net from close range.

Hibs responded immediately and Rachael Boyle’s through ball found Amy Gallacher, who rounded the goalkeeper to slot home from a tight angle.

Just before the break Hibs took the lead with a superb move through midfield culminating with Boyle going one on one with the keeper then selfishly squared the ball to Colette Cavanagh who scored from close range.

Just after the restart Hibs were awarded a free-kick following a controversial handball against Chelsie Watson and Gallacher dispatched the resultant free-kick into the top corner.

Motherwell refused to lie down however and pulled one back in the closing minutes when a cross found Nicole Pullar who rose above Joelle Murray to head past the goalkeeper.

It was a nervous last few minutes for Gibson’s side but they held on to secure all three points.

Gibson was happy with the victory but insisted that they have to eradicate the mistakes.

After the final whistle Gibson said: “I thought it was a game of two halves. In the first-half we turned up with the wrong attitude. We played Motherwell in a friendly three weeks ago and we won that quite comfortably. Maybe mentally the girls expected to turn up and turn them over again.

“We’ve always said that there are no easy games in this league, especially for us. Teams want to beat us and Motherwell came with bags of energy today and made if difficult for us.

“We had to adapt first-half, bit I don’t think we did that until the last ten minutes of the half. If we are being honest we were a bit fortunate to go in one up. I think 1-1 would have been fairer, but we take that.

“We had a chat at half-time and spoke to the players. We said what we weren’t happy with and what we were happy with. Everything we saw in the second-half was what we had worked on during the week, players going in beyond and in behind their back four, midfielder going and supporting and wing-backs being high and I don’t know how many chances we created in the second-half, but it was the same story.

“We don’t seem to be able to kill teams off. We allow teams to stay in the game and again they got their one chance and took it and it made it a nervy finish. Overall it was the same story as normal. We didn’t take enough of our chances and we gave Motherwell something to hold on to and eventually they got a goal. I think we just need to eradicate the mistakes.”

Goal scorer Gallacher added: “I thought we were OK. Much better than last week. We created a lot more chances. We dominated the ball but could have done better with individual errors again bu it was a good result going into the three next big games.

“We will take confidence from it and hopefully get some results in the next three weeks.”