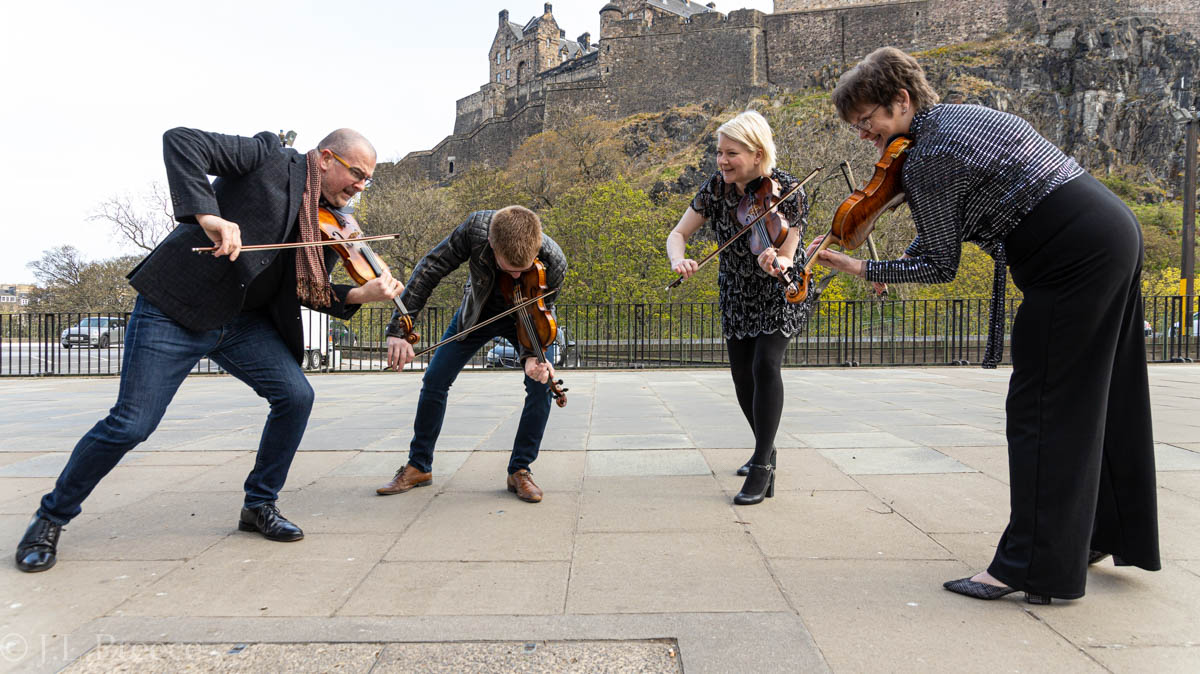 Following the great success of 2019’s What A Voice, which celebrated female tradition-bearers, Edinburgh Tradfest turns its attention to the historical Shetland fiddle tradition with a performance re-imagined for a digital platform.

The hour-long concert celebrates the rich and distinctive tradition of the ‘spring’, (the dialect name for old Shetland dance tunes). Specially filmed for Edinburgh Tradfest’s online programme, this show brings together four of the foremost contemporary Shetland fiddle players for an evening of celebration – Margaret Robertson, Chris Stout, Ross Couper and our show’s curator Catriona Macdonald.

Margaret Robertson is an inspirational figure on the Shetland music scene as a fiddler, pianist, teacher and composer. She has made an impact nationally and internationally with her own music and musicianship as well as in her capacity as organiser of the fiddle element in the Edinburgh Military Tattoo’s Pipers Trail, which has visited Australia, New Zealand, Germany and Norway.

Born and brought up in the Shetland Islands, Chris Stout has become nationally and internationally recognised as one of the most exciting and dynamic fiddle players and composers of his generation. Whether as a solo artist, a member of Fiddlers’ Bid, leading his own quintet or as one half of his duo with long time musical associate Catriona McKay, Chris continues to innovate within traditional and contemporary music circles, delivering performances which excite and inspire audiences all over the world.

Ross Couper is one of the foremost fiddle players of his generation. Hailing from Shetland – the fiddle capital of the world, he has been playing the fiddle for over 25 years. Now in his early thirties he’s a full time member of Scottish dance legends Peatbog Faeries, as well as playing in a duo with great Devon born guitarist Tom Oakes.

Catriona Macdonald started studying fiddle with legendary Shetland fiddler Dr Tom Anderson at the age of 11, and just two years later won the Shetland Young Fiddler of the Year. After four years at the Royal College of Music in London in the early ’90s Catriona moved to the Scottish Borders where she is now based. She is a senior lecturer on the BMus Folk Degree at Newcastle University, and tutors regularly at various summer schools.

Each of the performers are steeped in the older repertoire of these Northern isles and, as composers in their own right each are adding their own voice to this living tradition. Join them for this special collaboration that promises riotous reels, heartfelt airs and a special meeting of musical friendships.

Douglas Robertson and Jane-Ann Purdy, co-producers of Edinburgh Tradfest said: “Taking the Festival online this year was a difficult decision for us. However, we couldn’t be more delighted with how this year’s programme is shaping up, and with all the support we have received from artists, funders and partners keen to see Tradfest stay on the map. We are also excited to be able to reach a wider, international audience who might not have experienced the festival before, and hope that when they can, they will join us in Edinburgh for future Tradfests.”

Leading traditional fiddle player Catriona Macdonald (Shetland Springs) said: “When Margaret Robertson and I played for Spotlight back in 2020, it was really special, not only were we playing live, but we were also playing tunes that are at the heart of our island’s heritage. We are thrilled to be getting together to record this concert next month with the rest of our band from ‘Da Auld Rock’ . In these times we are well overdue a musical ‘spree’, and really glad we can be part of this year’s festival.”

Edinburgh Tradfest showcases a wealth of talented home-grown and international traditional artists. It will move online for the first time this year, with a programme of recorded and live streamed music concerts, and daily podcasts.