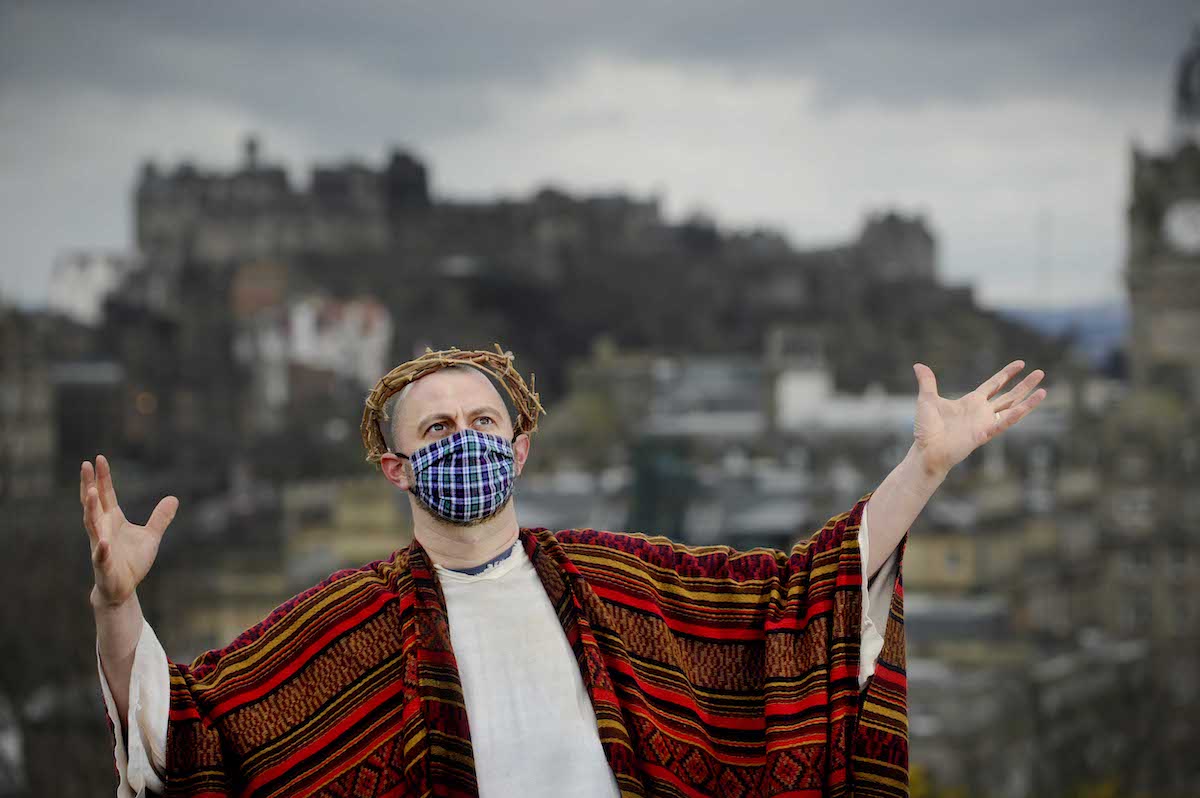 The theatre company behind Edinburgh’s “The Easter Play” have launched a series of online short films shot in a variety of locations around the city, to replace the usual annual live event in Princes Street Gardens.

Hopes of staging live performances have been dashed by Covid, but the pandemic has given the film series an infectious diseases theme.

The Easter Play is staged each year in Princes Street Gardens but are being replaced by audio and video releases to be published over Easter weekend here.

Each film concentrates on a single character from the Easter story to allow for social distancing and filming took place in contemporary locations around Edinburgh from the graffiti in Fountainbridge to the Banana Flats in Leith.

Artistic director for ‘Scenes From The Passion’, Suzanne Lofthus, said: “The aim of the films is to put the Easter story into a modern setting and the company have worked on the characters looking for modern contexts.

“One of the characters in the Bible is a leper, and so the writer explored what it means to have an infectious illness which meant they had to be isolated from society – we didn’t have to look too far for a modern parallel!”

“Cutting Edge Theatre and the Princes Street Easter Play Trust have been working on the delivery of the Easter productions since last year, and we hoped they would be able to go ahead in 2021. Sadly, it has proved impossible.

“After the decision was taken to postpone the Edinburgh Passion and Easter Play until next year, we were challenged to keep moving forward and think about what we could do for this year.

“The films will be released on our website over the course of Easter weekend, anticipating next year’s large-scale city-wide community production, the Edinburgh Passion, which will involve the whole city in telling the story.”

Mike Frew, chairman of Princes Street Easter Play Trust said: “I’m enormously proud of our exceptional creative team and what they are achieving for this year’s production.

“Suzanne, our director, and the writers, actors and technical wizards have put their talents to work and come up with ideas for an impressive and varied digital retelling of the Easter story. We are delighted to be working with Cutting Edge Theatre on this innovative production.

“‘Saturday’ is a new original play which takes us into the lives of the disciples and the occupying Roman army, looking at the impact on them of the life and death of Jesus, ending with the hope of resurrection. We are delighted to be producing it in audio form this year.”

The “Scenes From The Passion” series of 21 short films will be released during Easter weekend (April 1st to 4th 2021) on www.edinburghpassion.com

And “Saturday”, an original audio play telling the story of Easter from a fresh perspective, will be released on www.easterplay.org on Saturday 3 April 2021.